And so we revised our paradigm to roll with Plan Moon.  You can learn more about how we came to find ourselves in this new mindset in my previous post here.  Since we were no longer tied to finding a permanent home in the immediate future, everything sort of opened up to us.  The temporal reprieve we granted ourselves by taking another year to travel (or, as Flight so eloquently stated, we simply “kicked the can down the road for a year…”) was now wide open with possibilities, but there was so much we had to tend to immediately we couldn’t even contemplate what that meant.

Flight and I made the opportunity to go to one of our favorite places in DTA (Downtown Annapolis for any non-locals) leaving Keeper in charge.  We went to Dry 85 (see below – not my picture, but found it on line…), which we love for fantastic eats and scrumptious beverages served in a gezellig  environment, and squirreled away with computers, paper calendars, notebooks, and pens.  Okay, so the former was all Flight and, as he calls me the “Walking Electromagnetic Pulse” (or “Walking EMP” for short), the elegant tools of 20thcentury record-keeping were all mine.

Based on Flight’s work schedule, we came up with an appropriate means of dividing and conquering the possessions we had amassed to shoehorn as much of them into a POD as possible.  Flight tackled the shed and the garage during his few days home and I packed out the kitchen, all the while lamenting why we have so many dishes (living in 280 sqft has made me very aware that we truly don’t need much to joyfully exist – I think Marie Kondo is onto something…), and started on the basement.

I should mention that (over?)zealously packing up all the pots, pans, and dishes required some culinary creativity. 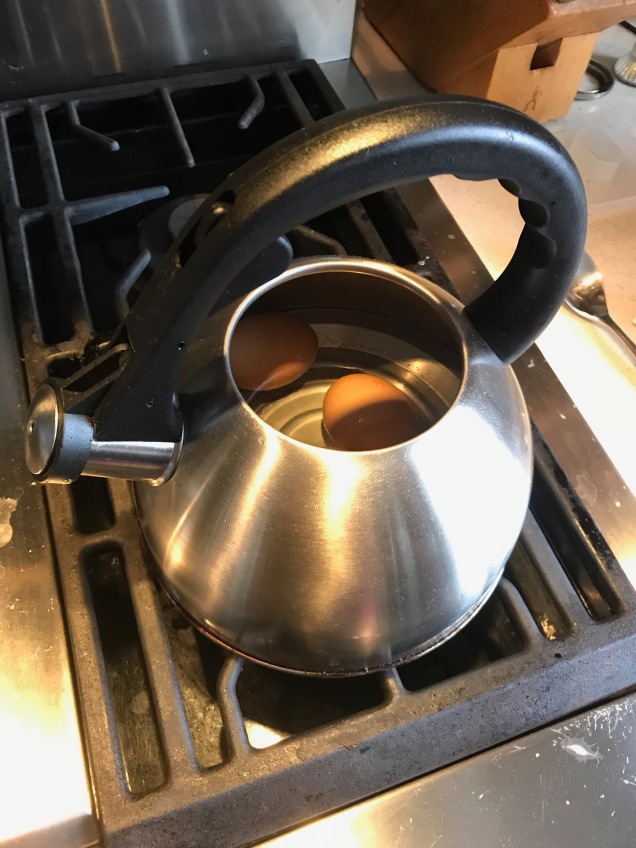 During one of our delivery runs out to the slowly filling POD, one of our gracious neighbors strolled over and casually observed that she noticed the “Under Contract” sign had been taken down before asking, “What happened?” We gave her the bare bones rundown of our latest real estate drama (which was nothing compared to the first go around and you can read more about that here) and she said something to the effect of, “Well, good friends of ours put in a contingent offer on your house and were disappointed when it wasn’t accepted.  Let me reach out to see if they’re still interested…”

Within an hour, their realtor called ours to officially indicate their interest and we asked them to put together an offer once our house went active again the following week, most likely after we flew out.  Our fantastic realtor team made the opportunity to reach out to other families who had expressed interest in our house to advise them the deal had fallen through and gauge their interest in writing an offer.  One such family was hours away from writing an offer in on another house and jumped on our recently liberated property within hours after the first deal fell through.  Through the neighbor network, the other couple also put in an offer as well, although as theirs was still contingent, we went with the first.  Although, more than a little jaded by our Maryland real estate endeavor to date, we knew not to get our hopes up…

Flight and I took a break from sorting through, throwing out, and packing up most of our worldly goods to join in the celebration of a friend’s retirement from the Navy after 25 years of honorable service.  Despite neglecting to get a picture of the man of the hour, I managed several with his wife, with whom I’d shared our four years by the Bay at USNA, and several of our Academy classmates. 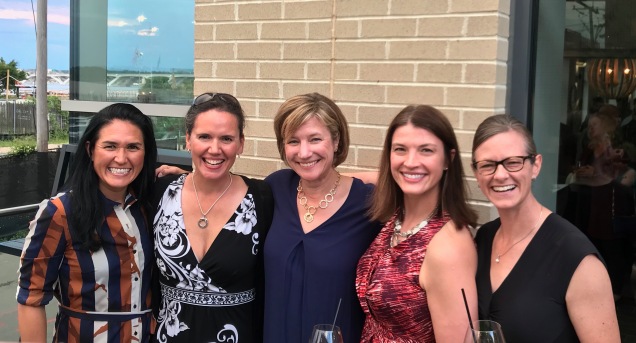 While each of these women is remarkable in their own right, this lovely soul picture with me below is one whose friendship dates back to third grade Brownie Scouts.  I’m not making this up.

After a couple solid days of work, Flight left on another work trip and I got down to serious business. I took the girls to gymnastics camp every day and left Keeper to tend to his own entertainment.  He was so excited to have his own room again, one with a door that actually shut, that I’m not sure my abandonment even registered. Meanwhile, I squirreled away in the basement and streamlined 20 boxes of likely superfluous memorabilia down to eight (translated: 12 boxes sparked no joy…).

In my spare moments, I oversaw the bittersweet installation of our new pool liner chosen by a family who would not be residing here and, as Flight noted, the pool looked its nicest since we’ve owned it.

As is so often the case, especially when we attempt to fly standby in the summer, all the potential flights filled up at the last minute and we had to change our itinerary countless times.  After being in the Caribbean for a few days, Flight had landed in Boston near midnight, called me and we talked through the possible options for the next day’s travel plans. Ultimately we decided on a late departure the following day to Boston, overnighting in Boston and an early flight to Seattle where Flight, after catching an earlier flight from Boston to Portland to collect Davista and drive to Seattle, would pick us up at SEA-TAC. I told the kids they could sleep in as long as they wanted because we were no longer departing early.

Flight called me at 6:38 the next morning to let me know most of the options we’d previously discussed were no longer possible.  Well, shoot. I had a most impressive to do list still awaiting my attention, but really needed to prioritize because we now had to catch an Uber in less than three hours.  Deep breath and initiate Operation Perfect Stage Triage Departure Checklist…

Okay, first things first – add a few more boxes into the POD in the driveway and secure our belongings in situ and away from the door so that if they move around and make it impossible to open the door when we get our stuff delivered at a time to be determined. Thinking ahead, my last trip to Home Depot was for boxes and more packing paper, but I also bought some rope and a few large boxes to tape together and create a barrier of sorts. Since we had another POD coming in a few weeks, I thought 100’ of rope ought to do it.  After I cut the line in half, the ends immediately began to unravel, really faster than I thought possible. Not really thinking things through, I took both ropes in to the kitchen to burn the newly cut ends to preclude further unraveling. Good idea in theory that becomes a bad idea when the rope burns enough poly material to drip on the wood floors that have recently been refinished.

I immediately tried to get the black melted nylon off the floor but it was as if the new embellishments had been epoxied on.  Awesome.  The POD was going to be collected sometime this morning, so I needed to tie everything down and lock it first before I could tend to the self-induced disaster I just created.

After doing further research, Flight called me as I was, with surgical precision I might add, steadily peeling up the burnt rope droppings with an Exacto knife.  He asked me if we could be ready to go in less two hours and I committed to being so.  A crucial 20 minutes later it was as though I had never engaged in rope burning jackassery and the floor was returned to looking beautiful.  The kids were extremely helpful in getting our house back to show condition, vacuuming all floors upstairs, the kitchen and living room downstairs and sweeping the stairs.  I cleaned all bathrooms, took a four minute shower (and again gave thanks for my plebe year training at the Naval Academy) and cleaned the kitchen with our ride to the airport inbound.

We had hoped Flight would catch an early flight down to BWI and rent a car to come back, help finish up with loading the POD, and run us to the airport.  Sadly, the flight he had his eye on pushed back from the gate 25 minutes early (that never happens!) and he wasn’t able to get back in time to be our shuttle.  So we rolled with it.  The only problem was I couldn’t sort out how to pay for an Uber or a Lyft with only our recently cancelled credit card stored in my phone. Our card had been cancelled the previous day after it was fraudulently compromised – I swear I’ve never been to a Walmart in Ohio.  Given that I was unable to devote any further mental power to sort that out, I requested that Flight set us up with a ride, which he did from afar and we had someone coming to collect us soon.

The kids and I left the house in show ready condition and we made our way to the airport.  We met Flight in Boston and caught a ride to Portland with his company.  Our arrival in Portland was too late to collect Davista, so we collected the Subaru from the Radisson (where we’d parked for free for the last two weeks – !!!) and drove to a Marriott affiliated hotel to stay on points.   As we collected our house on wheels, we were assured that Davista was just fine and sent on our way to Seattle.   It took us about an hour to unpack and settle in before we buttoned up Davista and made ready to get underway again.  No flashing check engine light on our way to Seattle – so far so good… Onto SeaFair and a good single malt…