Three months into our deployment aboard Davista, we can better assess what needs to go with us and what just needs to go. Although Flight already gave his summary at two-months in, mine is coming in several installments, the first being a quick (or HA! As if…) rundown on our gear assessment to date: 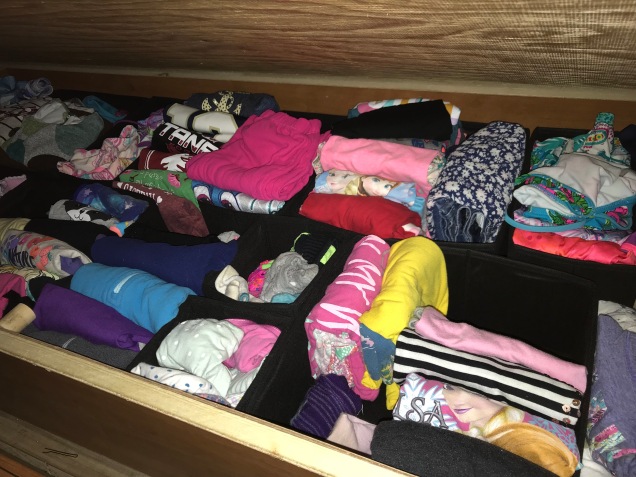 Understanding we’d be experiencing cooler temperatures after we departed Grammy and Papa’s house, I prepositioned some warmer clothing for WoodSprite (hand-me-downs from Firebolt) before we left Maryland, figuring Firebolt would probably outgrow anything we might have sent, which was a correct assumption. A quick run to Target allowed us to add long-sleeved t-shirts and matching leggings (folded same) to each girl’s wardrobe, but only after retiring some of the clothing that has become irreconcilably besmirched en route (what kind of a chucklehead brings white kids’ clothing on a year-long camping trip?!).   The girls also have a couple of fleeces for cooler climes.

For the most part, we have a pretty sparse yet utilitarian collection of kitchen gear.

We also have a sweet outdoor kitchen set up, thanks to Flight who both researched and purchased the grill and prep table, and tapped into the propane tank to feed the former: 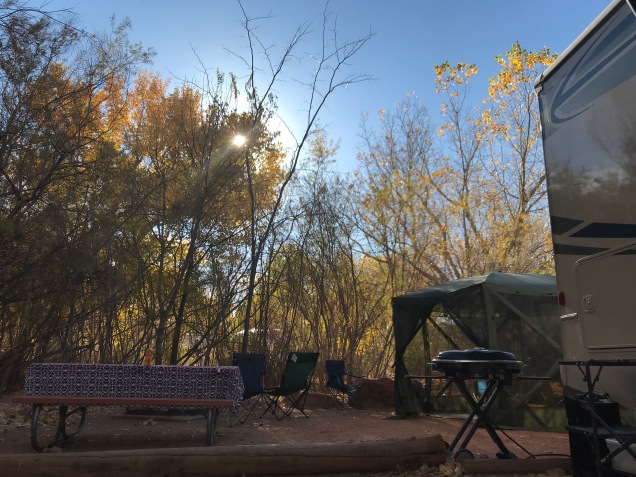 Dinnerware: From Pier 1, we purchased five melamine salad plates that we use for our meals (each kid got to pick a design),

as well as four additional matching dinner plates, which we mostly use as serving dishes. We also brought along two large melamine plates (superfluous) and two matching appetizer plates (use them every day) that we kept on our boat (the other two of each set broke somewhere in our Pacific NW boating days). While in Park City we made a run to World Market and bought a ceramic plate and bowl specifically to heat things in the microwave (important note – do not put melamine in the microwave and, although we already knew this, we had no dishes in which to microwave – !!!). We brought six Ikea kids bowls and matching cups for our kids to use. We already had four sizable melamine cereal bowls (fortuitously, those from our boat also match our newly acquired plates for Davista), which additionally serve as meal prep bowls.

Stemware: HA! Actually, we brought five plastic fancy wine glasses (one has cracked since we deployed and has long-since gone to the recycling bin) and four oversized plastic drinking cups. The former help us enjoy wine at the end of a particularly challenging day (e.g. Captain Crunch or Trouble in Motown or Holding Tarantulas or Feeding Ponies) and the latter are perfectly enormous for portioning out appropriate water servings in the desert. They can also be used for wine, if the day’s end warrants it.

Silverware: We have three salad forks (one for each kid), two dinner forks (one for each adult), five spoons, three soupspoons (mostly used as serving spoons), one butter knife, and four steak knives (WoodSprite doesn’t get one).  That’s all we need.  No more, no less.

Cutlery: We use only Swiss Army Knives. Kidding! We use a ceramic santoku knife (left ours at home and replaced it along the way) and two paring knives (we broke the ceramic one and only needed one to replace it, but ordered a second by mistake – !!!). Any requisite serrated knife work is accomplished with steak knives (please don’t tell Gordon Ramsay).

Utensils: Ideally, every tool we chose needed to be multipurpose. We pared down our gear to these necessities:

There have been a few items we have purchased along the way to replace ones we either broke (e.g. a ceramic knife) or forgot to bring (e.g. can opener – the Swiss Army Knife worked fine, but we opted to go large and get a new opener).

To make coffee, Flight enjoys the ritual of boiling water on the stove each morning and pouring it over coffee grounds using this fantastic contraption from Tanors:

I would offer my assessment of this piece of gear, but I have no knowledge of its functionality. Truly it’s in everybody’s best interest that I don’t drink coffee (I am socially unacceptable on caffeine), so I cannot attest to its value. Flight seems to like it, so it stays.

While I can’t stand that purple dinosaur, I do appreciate this sentiment. While we have minimal space to store cleaning gear, living with our outdoorsy flight of 5 means we have to be on it daily. We made do with a small brush and dustpan until our Park City friends shared with us the brilliant Dyson Stick, which we then purchased at CostCo at first opportunity. It helps keep the dust, dirt, and rocks from the journey in check.

The only cleaning agent I use is a mix of 50% water and 50% vinegar with several drops of some Four Thieves essential oil I made up (recipe from Mountain Rose Herbs) before we left with the following ratio:

It cleans everything, doesn’t introduce toxic chemicals to food work surfaces, leaves behind an aroma formulated to support your immune system, is relatively inexpensive, and easy to replenish. What’s not to love?! Not wanting to use up this concoction, Flight bought some Windex for the enormous front windshield, which he has since powered through.

I also only brought four dishtowels with us and quickly purchased an additional dozen (or more?) from CostCo. We use them washing up after every meal and needed more to better span the time between Laudromat visits.

Not sure what to expect we brought a few niceties that have just been taking up weight and space while we hope we’ll make use of them someday. Most luxuries that have been so identified have been “retired,” which means they’ll be staying at Flight’s parents’ house until we can collect them in the future. The Heftiest Underused Space-Hogging Appliance Award (HUSHAA) goes to the VitaMix. One smoothie brekkie and one instance of making crepes in two months underway just didn’t make up for its added weight. The Instant Pot, however, is worth every solid ounce as we use it at least three times a week.

We haven’t used everything yet in our homeschool inventory/library, but will update this post once we get a little further into the academic year.

As Flight mentioned, we’re still not sure about the kayaks. Cool to have, tricky to pre-flight, and threatening to get moldy. I like having the option to use them, which may explain why I may have acquired so much stuff in our stationary house…

Gear from the Department of Redundancy Department:

There are also some things that we seem to have overdone.

Hairbrushes: I don’t care how you slice it, eight hairbrushes (not including those that stay in the Subaru, in Flight’s work bag, and only brush dolls’ hair) is ridiculous for tending to five human heads of hair:

Bedding: For each of the four beds we sleep in every night, we have two sets of sheets. Whenever the sheets are pulled for laundering, the beds are made up with clean sheets (stored outside) before we even leave for the Laundromat so as to minimize our (my) stress level upon returning with clean folded clothing. We opted to go European and use only bottom sheets (over mattress pads) and duvets. There also is a blanket for added warmth on each bed. Although most places haven’t necessitated the use of both blanket and duvet, I’m sure there will come a time when we’ll be thankful for both. We also keep two blankets in the Subaru for picnicking or emergencies.

Towels: Towels are tricky. They can weigh a lot and/or take up lots of space, especially while drying. We have five beach towels that reside in one of the outer compartments while not drying on hooks in the bathroom or on the back of Davista. I had purchased a Turkish Towel for each member of the family (everyone got to pick their very own design) and only the female members of the family are routinely using them. Flight and Keeper bailed on that notion about a week into deployment, citing it doesn’t quite quite get you dry enough, and instead grab clean beach towels any time they head for the showers. I do like that the Turkish Towels readily dry. Let me clarify, after using the Turkish Towels, THEY dry easily but don’t necessarily dry people as well as traditional towels. Fortunately, they’re relatively light and compact. We’ll see if they get the heave ho… We did bring four hand towels, all off-white (packed by the same brilliant person who thought of the white clothing for the girls…) and I swooped another half-dozen of various colors from our house in September during my Navy Reserve weekend.

First Aid Kit: We have five different First Aid Kits. Although it may seem ludicrous to have so many, they each have their purpose:

So Stoked We Made Space for These Items (for (my) Sanity’s Sake):

Bikes: Although we don’t use these everyday, the kids get on them most days and they have served as a great means of local transport as well.

Games: Quite the gaming family, we have found our favorite compact games:

On the Go… One of the smartest things I have done along our trek was to throw a deck of cards into my purse. Everywhere we go I have a deck of cards with me, which has served to stave off meltdowns of all varieties. We have played Golf waiting for: food service at restaurants, older kids to ride rollercoasters with Flight, and our wind while resting up along hiking trails. The kids have also been known to play Go Fish as we wait. If my purse were big enough, I’d throw in Scrabble tiles too.

We also have four laptops and a PS3, through which the kids enjoy playing Minecraft. Fortunately, that option’s only functional when we have shore power or run the generator.

Hobbies: Although I have purchased some yarn along the way, I brought a few knitting projects with me to finish (or start first and then finish). Thus far, I have finished a purple knot sweater made out of Alpaca wool, am about 94% done with a Christmas present (need more yarn to complete that project), and should be done with my next uniform sweater around Christmas. WOO HOO!  Please note I did not indicate which Christmas.

DVDs/Blue Rays: The girls each have a DVD player in their bunks, which they may or may not be in during transit time. The DVD players can be either synced to play the same movie in both places or, if they are unable to agree on video entertainments, separate shows can play. One fabulous feature that they’ve recently rediscovered is the DVD players’ accompanying headphones – awesome for everyone involved.

See, a not so quick run-down on some of our living-in-Davista essentials.  Flight can better speak to the maintenance gear and outside toys, so I’ll leave that summary to him…