One of the greatest things our travels have afforded us is the opportunity to reconnect with friends we’ve met throughout our lives.  One of those people who made a great impact on both Flight and me was one gentleman we each worked very closely with in our squadron days.  He was the Chief Aviation Electrician in my first shop and, a true mentor, taught me a lot about how the Navy runs.  In addition to being a stellar electrician, he was also a flight engineer and flew on Flight’s crew.  While we worked through some challenging issues with our shop on the ground, he and Flight worked through countless of them in the air, every time safely returning them both to land.  Flight so respected and valued his input that he called his former flight engineer while he was limping a plane back to the Netherlands from the Caribbean during his exchange tour with the Dutch Navy.  Not only do we each value his professional savvy, he’s just an all around solid fellow we wish we could spend more time around.

We were fortunate that his son was stationed in Annapolis for a short time, so we were able to connect with him once during a family visit, but as our travels hadn’t previously taken us to Cuba, Missouri, we hadn’t seen him much since his retirement from the Navy many moons ago.  We both welcomed the opportunity to route our trek west through his neck of the woods.

Flight and I really struggled with coming up with an appropriate path as we moved west, mostly owing to our ignorance about the middle of the country.  With an anchor point of Cuba, MO, there remained any number of ways we could take five days to get from Atlanta to Denver where we had our next campsite reservations.  I had originally suggested going through St. Louis so we could see the magical Gateway Arch. After reading the reviews of this particular National Park Service (NPS) site (and seeing the tic start jumping in Flight’s eyelids in response to the likelihood of having to wend Davista through another tight metropolitan area), I broadened the scope of our trek and found another NPS site to see on the way.

Most fortuitously, Flight had also indicated his interest in seeing the Ozarks so traveling through the Ozark National Scenic Riverways was a no-brainer.  We stopped to stretch our legs, have lunch, complete Junior Ranger badges, and freak out to be reminded that snakes climb trees (maybe that last one was just me…).

I don’t know why that particular serpentine skill set escaped my attention, especially considering I can sing all the words to “Trust in Me” from the Jungle Book, but I had to work very hard to talk myself out of believing that snake must have plopped onto Davista and snuggled into some cranny to ride to Cuba where it would then make its stowaway presence known in a most disturbing manner.  For me, snakes fall into the same category as unidentified swimming objects (USOs).

I find water boasting clear visibility to be soul-soothing and lovely, whereas murky water tends to unleash my imagination so it can enhance the capabilities and instincts of any and all hypothetical USOs I might fathom.  And I can dream up some doozies.  I admit this character trait does not serve me the best, especially when doing a float along the sediment-rich Meramec River.

Upon first hearing the river’s name, I couldn’t get the Irish Drinking Folk Song “Mary Mack” out of my head.  Try as I might, it’s on a loop soundtrack even as I now type…

When we pulled up to the Indian Springs RV Campground we were a little concerned.  Apparently the previous week’s rain made the Meramec so swollen the entire campground had been waterlogged.  The sites along the river, of which ours was one, were only now becoming usable, which meant the campground was empty and we could choose any site with the mud viscosity of our desires.  We opted for the driest of the lot and were steadily joined by other RVers as Memorial Day weekend approached.

Our friend was able to take the day after our arrival off and he and his daughter met us at our campground with kayaks to explore the river.  It was extremely convenient to put in steps from Davista and we got underway just after lunch.

WoodSprite accompanied me in one of our two seaters and Flight and Firebolt cruised in our other one. 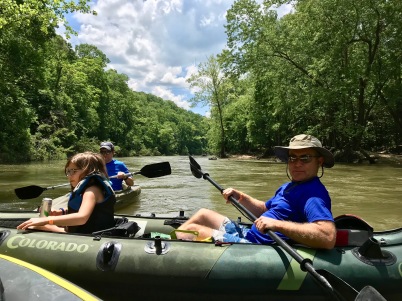 Keeper, however, was kayaking solo and, most impressively, made the opportunity to read Tom Sawyer along the way.

The timing of this book choice was hardly incidental as we knew we’d be moving through Mark Twain’s stomping grounds.

Our leisurely six-hour paddle afforded the opportunity to kayak beside and visit with our friends as we floated down the river, the transit interspersed with swim calls, cliff jumping, attempted rope swing operations, and modest cave spelunking. 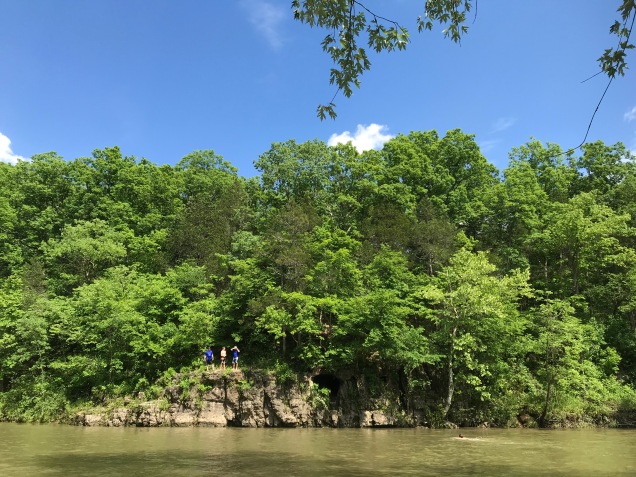 It was fantastic to be introduced to the Meramac’s treasures by two of the locals who know it best.  Fortunately, our friends had let us know about the native alligator gar, a fish that looks an awful lot like its namesake (see the picture below I found online…).

I say fortunately because I saw one surface close to our kayaks, nearer than I found comfortable. It looked like a baby gator and two thoughts immediately came to mind.  First was the trailer for the terrible movie “Alligator” which I remember seeing on TV while growing up.  The gist of the film was an unwanted pet baby alligator was flushed down the toilet, fed on escaped scientific test subjects (rats) that were riddled with growth hormones, and grew to Godzilla proportions to wreak havoc on Chicago.  Inspired by that movie, I remember dubiously eying the commode every time nature called, unsure of what might surface when I was most vulnerable.  My uneasy truce with modern plumbing lasted for several months until I was drawn into other preoccupations.  Although, frankly, port-a-potties still invite my creative juices to go in such unwanted directions.  The second and more recent flash pointed to the signs surrounding the “lake” in Houston. Although I didn’t see any telltale gator silhouettes, I could imagine them circling darkly beneath the muddy waters, awaiting foolish appetizers to enter their domain.  Such creature sightings, even when I know what they are, don’t do a whole lot to help me keep my imagination in check and serve only to reinforce my desire to maintain a healthy distance from those who call the water home.

Purposefully and intently stuffing my creativity back in the box, I ignored what I had just seen and instead focused my energy on how to make use of the many rope swings dangling over the river.  We tried to take advantage of several, but they were all in poor repair and impossible to reach.  Bummer.

Our last stop on the float was a cave behind a spring.  It’s important to tell you this because the spring appeared to be channeling water in directly from the Aleutian Islands.  It was ludicrously cold.  As we were approaching the inlet, the spring’s artic tendrils crept out of the river’s alcove and the water temperature noticeably dropped.  I did not take that as a good sign. 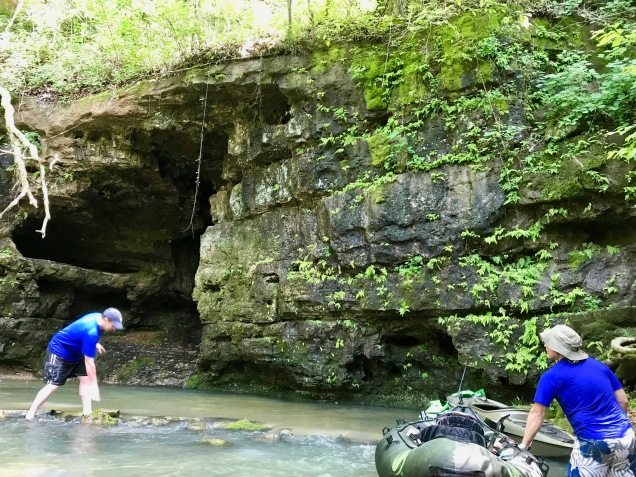 Steeling ourselves for the frigid (and slippery!) walk through the water, we slowly made our way to the cave entrance.  Mildly claustrophobic, I chose not to venture too far into the cave but captured this picture of the braver souls in our party. 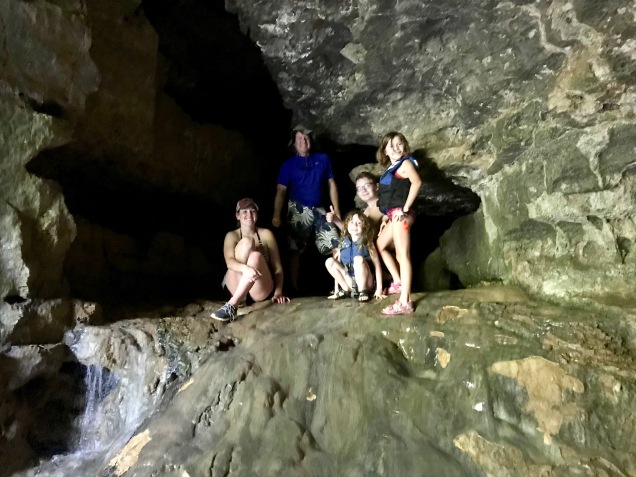 The beautiful view out to the icy pool was almost enough to make me forget my lower legs were still numb. Almost. 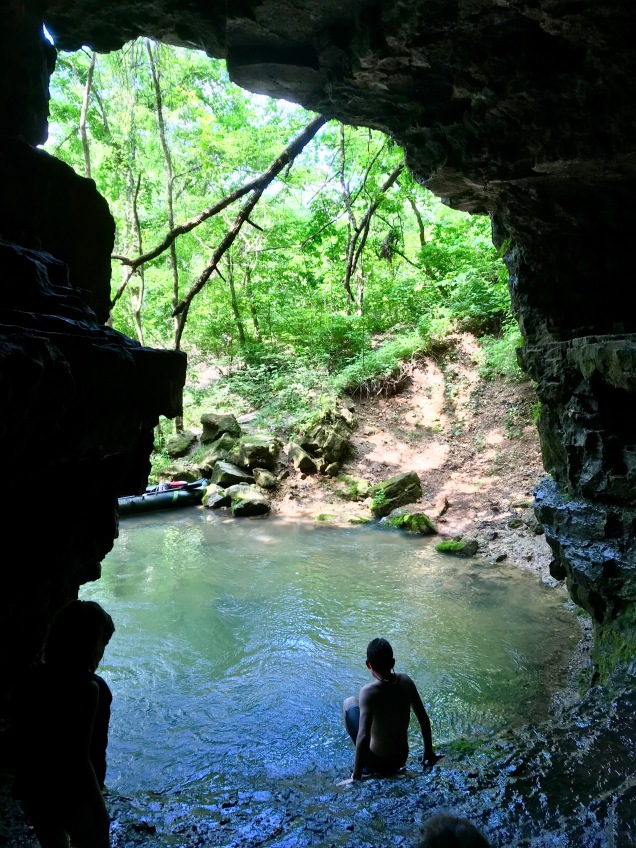 Once more through the pool, I held WoodSprite’s hand in a death grip to preclude either of us inadvertently going for a brisk swim.  We made it back to our respective transports and carefully extracted ourselves from our waypoint.  The rest of our float provided me the privilege to soak in this valuable time with our friends that we rarely see.  It was made even better by having his extended family meet us at the take out point and caravan us back to Davista.

Flight and I spent much of our drive the following day reflecting on how incredible this journey has been, especially in affording us the opportunity to reconnect with some great friends, and we again gave thanks for being in a place in our lives where we are able to so travel.