Perfect weather, after some ugly days.  House not sold, though the original plan stipulated a sold house as a requirement.  Two divergent (and poorly communicated) ideas about how our last day in Maryland would look, scheduling-wise, leading to some frustration at 1AM the evening prior, or I guess I should say the morning of.  There has to be either some foreshadowing or some greater truth in there, but I haven’t made the effort to dig deeper and probably won’t.  Because ultimately we took the first step, which I’ve got to think is the biggest, and we pulled it off!

[Note:  we’re not using our actual names on this site.  See the “Who Are We” page or click here for explanation of callsigns.]

Backing up slightly and with the benefit of a little hindsight, I can see that there was simply no way we were going to feel prepared.  For months I’d blabbered about how we had so incredibly much to do and we had to get on it now now now, but that now seems naive at best, somewhere south of annoying at worst.  Though I’m sure we could have executed more efficiently on several levels, it was always going to come down to that last week.  Later and later nights sorting / discarding / donating / fretting / fixing / packing throughout the week, with Davista parked in our driveway (much to our HOA’s chagrin I’m sure), culminating in a no-kidding all-nighter by Tacco the night before leaving.  After a going-away party and the attendant clean-up no less.  It really was a herculean effort — I loaded food and “stuff” into the fridge and various RV compartments until I was incoherent, and then fell into bed, likely fully clothed.  I knew it was time when I tried to have a conversation with TC about our progress but found myself unable to form words.  But, and here’s the herculean part, I remember waking at some point while it was still dark — call it 4:30AM — and hearing a whirring noise from downstairs.  I found out the next day that it was TC on the sewing machine, making new duvet covers for the kids and pillows for the couch.  Spontaneous last minute project.  And they’re fantastic; they really add a sorely needed touch of home.  Wow.

7AM stretched to 10AM, which stretched to 1PM.  There really is a lot of “last minute” when you’re packing your life into a small space, possibly for good, and attempting to leave your house in a state in which it can be shown to potential buyers.  Yet in retrospect that part went as well as it possibly could have.  The hot & sticky sun and the hot & sticky rain finally relented and we enjoyed a 78 degree un-humid morning during which we were able to sign one of the studs in our basement for posterity, spread some of the ashes of our Cascadian Mountain Dogs in the yard in which they spent so much time playing, and enjoy a last picnic lunch by the pool.

And then we headed out.  The picture on the top of the blog is from the moment we hooked up the car to the back, I gasped in temporary horror at the beast of a rig we were about to lumber around the country, and we left our Maryland house in the newly installed back-up camera (no real rear view mirrors on this thing).

Our first destination was Cedar Point, in Sandusky, OH.  Not so much because we were dying to ride the roller coasters there, as that it’s generally in the direction we wanted to go and seemed about the right distance to travel.  But the coasters were kind of a bonus.  Though I’m nowhere near as much of a fan as I was when I was young, I’ve passed some of that bug on to Keeper, and I still get a kick out of a well-designed thrill ride.  TC saved me, about a half second prior to an ill-advised mouse click, from booking disgustingly expensive lodging right at the park (no RV sites available, so I figured we’d just park it and stay in a “cabin.”  Bad idea jeans.), and we opted for the far more reasonable Sandusky KOA instead.  KOA!  This will be a first for all of us.  Interested to peek behind that particular curtain, particularly since we’ll likely be spending quite a bit of time behind it for the next year. 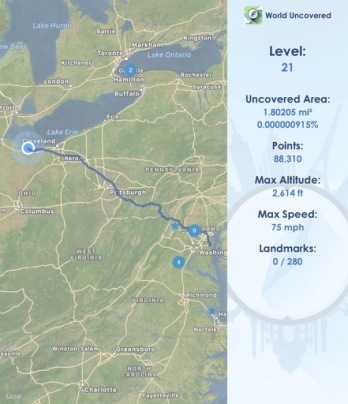 Ignore that max speed.  That would be against the law.  Plus I’m pretty sure we didn’t get up to 2614′ in the Appalachians.  Silly app.

I’m trying out a few different iPhone apps to track our progress, so these maps will undoubtedly vary in appearance.

The best I can describe the driving is that there’s a learning curve.  For the first two hours or so, driving took every bit of my attention, so much so that I couldn’t even really engage in conversation.  In aviation we talk a lot about “Situational Awareness” or “SA” for short.  It’s essentially a catch all term for having an instant-by-instant understanding of where you are, what’s around you, what the potential hazards are, your “energy state” (much more complex in an aircraft than an RV, but essentially how fast you’re going with a consideration of how fast you might want to be going a moment from now), the status of your equipment, a host of “what ifs,” etc etc.  That’s what driving this thing feels like — starting all over with driving SA, and needing much more of it than I was used to.  You can’t stop, turn, or change lanes quickly, you take up about 50′ of road front-to-back and all but about 2′ of the lane side to side, and the inputs you’re getting from the mirrors and cameras aren’t familiar.  Plus reverse is impossible without disconnecting the car you’re towing, so there’s some foresight required there as well.  Anyone who has driven a full-sized truck would probably yawn at this, but it’s new to me, and far more challenging than towing a boat.  I’m continually surprised by how much the entire thing flexes and yaws and buckles with every turn or gust of wind or bump in the road; I’d imagined motorhomes to have a much more solid feel to them.  We learned early on (i.e. well before today) that we needed child safety latches for the drawers to keep them from flying open and sending all our plates, pots, and pans flying across the floor during left turns.  All that said, after a few hours the driving felt pretty comfortable.

I found myself amazed that all this equipment is working together, as advertised.  Learning the motorhome systems was one thing, but two months ago the idea of buying a car we could tow, installing all the requisite aftermarket gear on it, and actually getting it and all our “stuff” on the road was completely overwhelming.  I had to break the task into tiny, achievable sub-parts to keep from throwing my hands up.  But here I was barreling down the road looking, via the camera I’d installed, at the car with the 2 bikes on top and the new base plate bolted to the frame and attached to the RV via the two telescoping bars and the wiring harness I’d wired, and sure enough, when I pressed the brake, the little light I’d installed in the dash came on, telling me that the cylinder and control box I’d bolted to the floor of the Outback and tied into its braking system was, indeed, pulling on the cable that I’d attached to the brake pedal and actuating the Outback’s brakes for me.  Amazed, but it also feels like a mini-victory.  This kind of thing was never in my skill set, so slogging through putting it all together, understanding how it works, and watching it actually function is far more satisfying to me than maybe it ought to be.  Perhaps you’re accusing me of risking a hurt shoulder while patting myself on the back, and I won’t argue with that.  In this case I highly recommend it though.

The route was pretty, but not mind-blowing.  I think we were all wrapped up in fairly heavy introspection/processing.  Still are.  And with that, I’ll sign off, other than to say that the KOA is….. interesting.  And I promise most posts won’t be this long.  Unless they are.