After we dropped Flight off at the airport, we headed into Marquette proper to explore. First, we had brekkie at Donckers, Marquette’s premier candy store (they have a delightful deli above the incredible sweets shop), and I enjoyed the best breakfast sandwich I have ever eaten. Seriously. Instead of being filled with peppermint patties and Doncker’s trademark caramels, which would have been equally scrumptious but maybe after dinner, my sandwich was brimming with hummus, goat cheese, tomato, avocado, ham, and topped with an organic egg – all on house-made focaccia goodness. Words cannot do it justice. The kids went for French toast and hot cakes, but my savory choice was perfect.

I’m not sure how I managed it, but over breakfast I convinced the kids we should check out the Marquette Regional History Museum next.   Unsure how well or for how long the exhibits might capture their attention, I was very pleasantly surprised by how much we all enjoyed the experience. The smaller rotating exhibit was on fly-fishing (something we hope to try on our journey), and I was impressed with the amount of information that was easily communicated in a relatively small space. The girls completed a scavenger hunt as they learned about the local area. The bonus was that the museum was hosting a series of day camp groups, which meant there were a group of play actors discussing the exhibits and we were able to listen in. I spoke with one fellow who was portraying the local blacksmith, whose role was loosely based on his grandfather’s life. My favorite (of course) was the discussion of herbal remedies used in the early 20th century led by a retired pharmacist.

Hungered by our hours of exploration, we sought out another eating establishment to fill our bellies. As tempted as I was to return to Donckers, we instead chose The Delft Bistro, not due to the Dutch connection but because it boasted a great menu in an intriguing venue. Transformed from a 1914 movie theater, The Delft Bistro continues to show movies while providing delicious fare. The kids were thrilled to be able to watch a movie while enjoying their lunch (not something we usually encourage), and their preoccupation offered me the opportunity to plan out the rest of our afternoon and contemplate the rest of our time in da UP sans Flight.

Happily sated, we walked down W Washington St and found a couple of treasures along the way. As we meandered we found Taiga Games and were suckered in by the largest jigsaw puzzle I have ever seen:

Apparently it measures 17’x 6’ when complete. !!! We chose one a little smaller, 1/32 the size to be exact, and a roll-up puzzle mat in which to store it. We also spent considerable time browsing in Book World. Each with a Donckers’ treat, a new book, and a goodie from the museum store, we headed to the Suburu and returned to base, still unidentified mission complete.

In gathering research for the homeschooling aspect of our adventure, a good friend shared that it’s important to build in some down time for every few days of experiential learning to allow the kids to process their experiences. Wise advice, one I followed today. We spent the day reading, relaxing, riding bikes, and enjoying some beachtime. 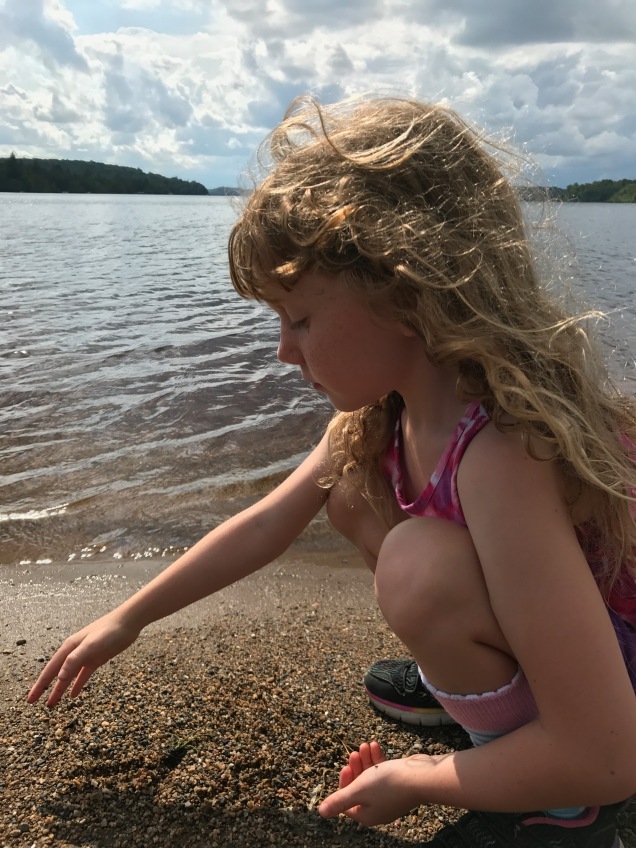 Friday was rainy and made for a perfect laundry day – woo hoo! Although there are some larger RVs that have a small washer and dryer aboard, ours does not. Fortunately. I had read in most places that it’s far better use of limited resources (water and electricity) just to go to a laundromat. Where else can you get five loads of laundry done in the time it takes to do one? Works for me. It offered us the time to knock out our homeschool efforts for the day and gave us another excuse to further explore Marquette.

After lunch at Donckers (couldn’t stay away), we retrieved a lost item from the game store before going to the Upper Peninsula Children’s Museum. Although Keeper was less enthusiastic about this part of our excursion (“Mom, this is for LITTLE KIDS.”), the girls were immediately enthralled. Not unlike its cousin a few blocks away, this museum was incredibly well appointed.   I lost track of how many alcoves there were (and occasionally the girls), each with a different subject to explore and presented in an ingenious way. Curious about digestion? You can pretend to be lunch, scale a climbing wall in the stomach and take a slide down through the intestines.   Interested in where stuff disappears to when you flush the toilet? Take a slide down a toilet into a sewer system where you can learn about the water table. Again, brilliant. While Keeper watched YouTube science videos and the girls ardently explored, I chatted with a lovely Yooper who gave us some good gouge on how to spend our remaining time in da UP. 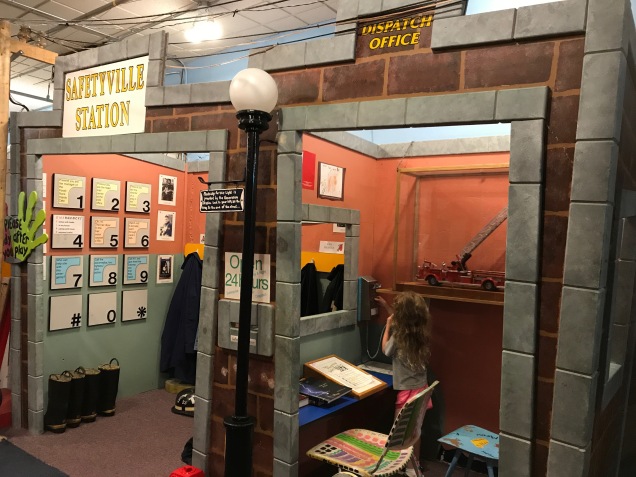 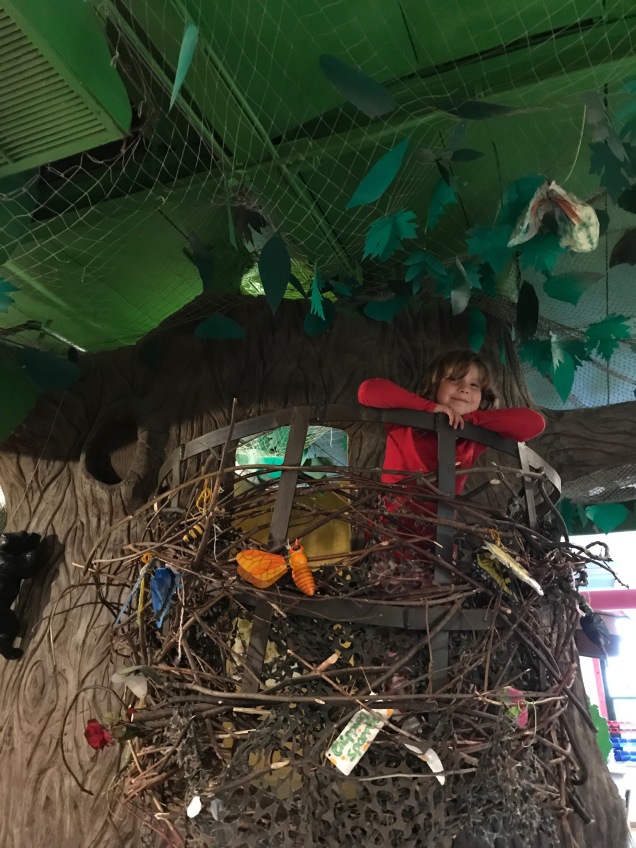 Bribing the girls to leave with a promise to get frozen yogurt, we headed back to W. Washington St. After a quick stop at Taiga Games (Firebolt had left a toy in the game store, which was just where she’d left it two days before), I made good on my bribe.

Our last stop in town was my favorite. The local Co-Op thrilled my foodie self. Having worked our way through much of our last Trader Joe’s run in Detroit, I purchased both staples and sundries to refill our larder and we headed home after a satisfyingly productive day in Marquette.

Our excursion of the day involved a two-hour drive out to Kitch-Iti-Kipi or The Big Spring, which is near Manistique.   The girls had a trickier time of it having lost the privilege of using anything with a screen. To entertain us during the drive, I asked Firebolt to read Little House in the Big Woods aloud, in preparation for a possible visit to the Laura Ingalls Wilder Homestead in DeSmet, SD, should we opt to go that route when we zip out to Grand Targhee to view the eclipse.

Although finding the “Mirror of Heaven” (title bestowed by early Native Americans) was not unlike completing a treasure hunt without a map (have I mentioned the sketchy cell-phone coverage in da UP?) and unlabeled landmarks, the long trek was certainly worth it. The underwater springs feed this gorgeous pool over 10,000 gallons of chilly fresh water every minute. !!! 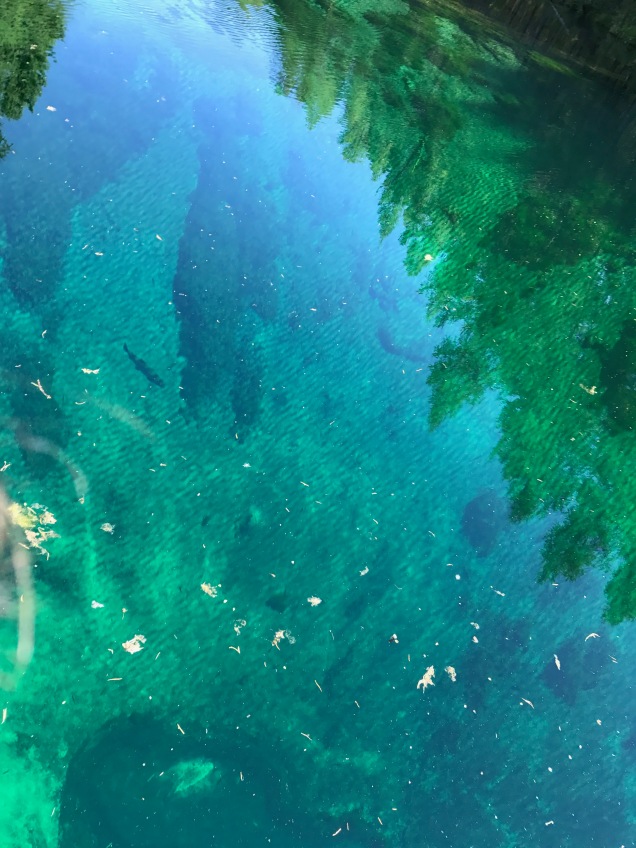 After waiting in line for a stretch (apparently we’re not the only ones who chose to visit the springs on a summer Saturday), during which we were enlightened by a very knowledgeable volunteer guide, we boarded the observation craft. It’s a basic pontoon with a large hole cut out of the center to watch both the vast fish population and the springs as they gush, and it is child powered (= brilliant!) to traverse the pool and return.

We opted not to make our way to the nearby mining ghost town for three reasons: 1) Woodsprite could not be convinced that the vacant town was not occupied by ghosts; 2) “nearby” ended up being 45 minutes in the opposite direction from Van Riper SP; and 3) the day was wearing on and we needed to get back to make dinner before the park hosted Showers and S’mores. The staff at Van Riper had a scavenger hunt (two in one week!) to learn about our solar system and the girls made Sky Wheels to orient themselves to the constellations while they enjoyed their s’mores.

The Perseid Shower put on quite a show and, being tucked away in the wilds of Michigan, there wasn’t a lot of ambient light to compete. Chilled to the bone, we trundled off to bed at 11ish at last. 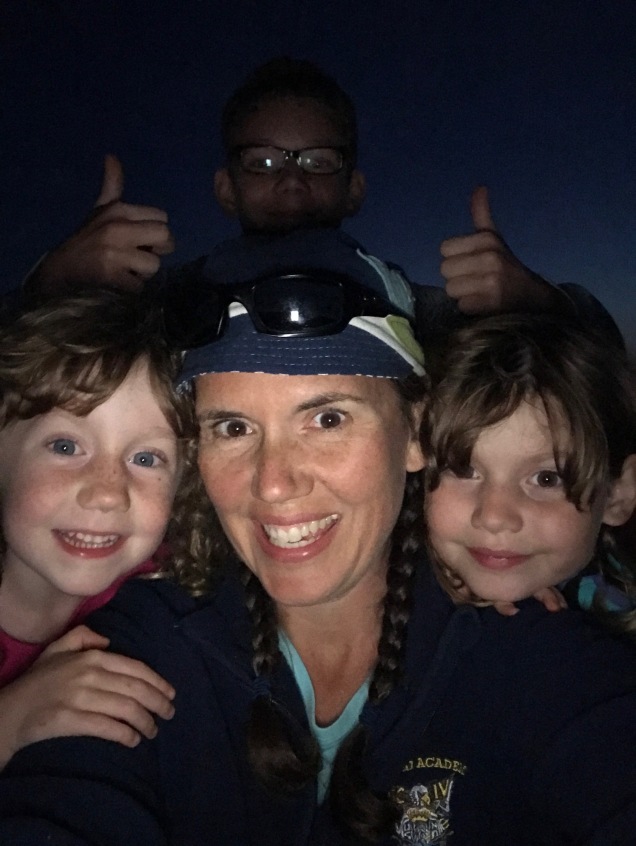 We had a bit of a lie in this morning owing to our late night. This morning I spoke with Flight about his rejoining the family. He is scheduled to land from his last flight into Boston at 6 a.m. tomorrow after a brutal red eye, yet wouldn’t be able to get to us in Marquette until 11ish tomorrow night – and that’s if he made the flight. Hmmmm…

The better options, namely his flying into Duluth or Minneapolis, would have him arriving mid-afternoon. That sounded much better to me, the only problem is either of those more palatable options would necessitate my growing a set of ovaries and driving our 50’+ circus train there to meet him. I think I need to sit with that, maybe review the checklist a few times and do a feasibility study. And drink some scotch. Sorry, Copper Harbor and Isle Royale National Park, we’ll catch you another time, I have to brood…