I have a rare moment to try to catch up on some writing and will try to make the most of it.

Flight well and thoroughly covered our stretch from Spearfish, SD, to Bozeman, MT, including our brief overnight stint in Sheridan, WY, but (as per norm) I will add my two cents on the unfolding adventure. Spearfish, SD, was beautiful and I am very thankful we saw it in the wake of and not during the Sturgis Rally.

The highlight of our trek to Bozeman was seeing Devil’s Tower. Native American stories about the rock’s formation involve variations on a theme of children being chased by a giant bear who then pray for help. Deliverance comes when either a tree stump or the ground grows into the enormous tower, moving them out of harm’s way. Foiled, the angry (and still hungry) bear jumps and claws at the tower trying to retrieve his elusive prey, and the resulting deeply gouged scratch marks are what uniquely define Devil’s Tower. 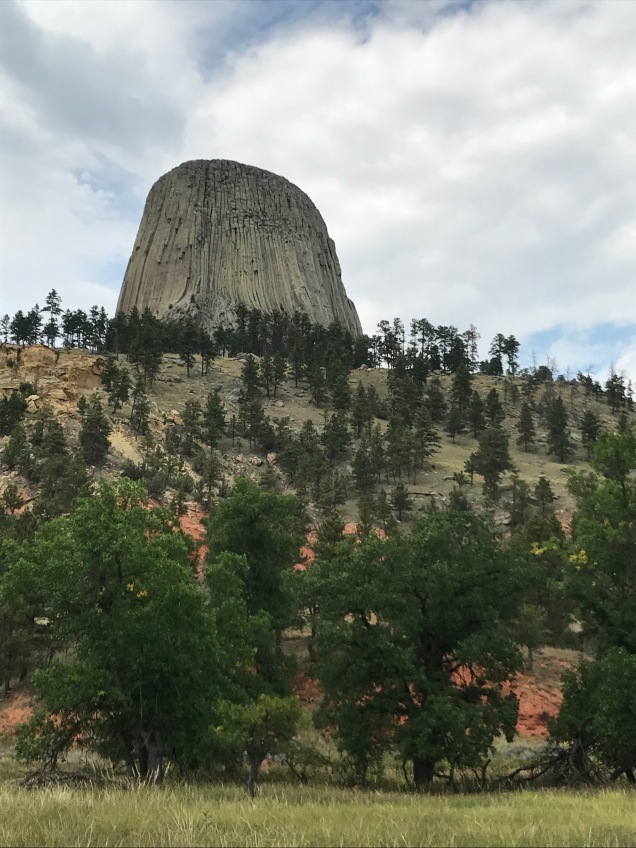 Or maybe it’s an alien mothership embarkation/debarkation point. You choose. Apparently I need to see Close Encounters again, because Flight’s absolutely correct – I remember little about the movie other than the musical exchange. I can still play those notes on the keyboard, if ever needed.

Although this picture is one of my favorites from the stop, I prefer the selfie I took of me and Flight (see his post below) because it almost looks like he’s wearing Devil’s Tower as an offset cowboy hat. If I had noticed that sooner, I’d have more appropriately posed that shot. Ah well, maybe next time…

My experience of Sheridan, WY, was exactly as Flight described – it was a place to do laundry and park Davista overnight, but it didn’t make the Must Revisit List (ever). The managers of the KOA were kind and offered our kids free mini-golf (it was play-by-donation) and I was pleased that our kids insisted on making a donation (from their own coffers) before they played. After our unremarkable stay in Sheridan, we eagerly made our way to Bozeman.

I, too, was really impressed with Bozeman for all the reasons Flight cited. One of the general impressions I have of our country, given the limited exposure to date, is that pretenses tend to fall away the farther you venture from our nation’s capitol. I know that some of the bigger cities, regardless of longitude, may be teeming with pretentiousness, but for the most part folks seem to get easier going as you move west – and that was typified by Bozeman. All whom we observed seemed eager to thrive doing whatever best fed their respective souls and appeared entirely uninterested in anyone else’s thoughts on the matter.  I was tempted to join them.

Our exploration of the main downtown area was after dinner and, unfortunately (or not?), many of the shops were closed. Frankly, I was okay with only window-shopping, as our present storage options are pretty limited, and, after a couple blissful hours of wallowing in the Bozeman Hot Springs, heading directly to the Montana Ale Works and Sweet Peaks Ice Cream Shop was exactly what we needed. Delicious eats and libations (Reverend Nat’s Cider – are you kidding me?!) at the former sated both the inner foodie and beer (and cider) geek and the latter’s dessert offerings were simply sublime.   They have another Sweet Peaks in Missoula, should your travels take you there first.

Our last stop before heading back to the Davista was at the local Co-Op, which was brilliantly appointed. Flight and I had previously flowed out our meals for our impending stay at Grand Targhee where we would be entirely off the grid. We purchased all that we needed for grilling and Instant Pot sorcery (we’ll have to run the generator for that luxury – and be sure to not use the microwave simultaneously lest we blow a fuze) as well as some energy bars in anticipation of our mountain hikes. I’m eager to set eyes on the Grand Tetons, as I’ve not yet made the opportunity to do so.

Unfortunately Bozeman Hot Springs is closed for bathing on Saturday until the evening (apparently that’s maintenance day), so we’ll simply pack up and leisurely head south in the morning.  Seems rather unceremonious given it’s the final stretch of our travels before we arrive to observe THE BIG EVENT.