As Flight described, not unlike being subjected to the Weather Channel’s apocalyptic hype about whatever storm might be brewing, we were convinced that there would be masses of people on top of people joining us to observe the total solar eclipse at Grand Targhee. The lack of traffic during our inbound leg had our eyebrows raised rendering us unsure of what to expect upon our arrival.

The spot we were allocated in the wide-open gravel parking lot was snuggled in between a handful of other RVs, however we were encouraged to park as close as possible to a fairly steep drop off and our newest best friends. There were only two ways to park Davista in our cramped space, the bow facing the drop-off or the stern. Either way, leveling our house was not going happen. “Why is this important?” you might ask. Aside from having Flight rolling downhill and crowd me while we sleep, dishwashing evolutions require considerably more care (usually more than I can manage) lest the tops of the kitchenette cushions get a little damp with runaway water.

We opted for facing the drop off, which meant the front wheels were off the ground entirely and we were resting solely on the forward jacks. That’s just fine when you’ve got plenty of flat ground around you, but it made me less comfortable only 10’ from the drop-off (I know I sound like Nemo’s Dad). When I expressed concern about this observation, Flight reminded me that the parking brake is set on the rear wheels which were solidly on the ground so, even if we came off the jacks unexpectedly (stranger things have happened), we wouldn’t venture too far. I wasn’t convinced by that logic and suggested we park about a foot away from and centered on one of the poles sunk deeply into the parking lot perimeter used to identify the drop-off even when under many feet of winter snow. “That should keep us from rolling off,” I thought to myself. Chances are we won’t budge, but that doesn’t keep me from exploring all unlikely possibilities.

I should back up and describe what’s (I think) at the root of this perhaps seemingly unreasonable fear. Some of the sequelae lingering from the near-fatal car crash Flight and I were in 18 years ago challenge me with vertigo and spacial disorientation.   The human body is an incredible piece of gear that can adapt to almost anything and mine is no exception.  I am very thankful to be as functional as I am, however some of my system’s post-trauma quirks have required further adaptation.

To make sense of where we are in relation to the world, our brains are given three major inputs: visual cuing (meaning anything we see), information from the semicircular canals in the ears (to provide sort of a dead reckoning based on perceived motion), and proprioceptors in the joints (to tell us where our limbs are in space). The way these three inputs are interrelated can be tested when you have consumed too much alcohol. Should you find yourself a little in your cups (and I am not advocating such behavior), crawl into bed (after getting a ride home), and close your eyes. Alcohol reduces your body’s ability to make sense of the semicircular canals’ input, so when you are then at rest and have no visual cuing, you will have no idea where your system is and you’ll begin to spin. If you do get the bed spins, you can continue with the experiment by putting your foot on the floor. The new input from the proprioceptors in your joints should be enough to override the other two inputs and you should stop spinning. Should being the operative word.

I learned so many things studying bioengineering in graduate school.

In the past few years I learned that the neural connectivity between my inner ears and my brain was severed in the Jeep accident and never regrew, so I have been relying on what my eyes tell me to know where I am. Since my semicircular canals no longer provide information to my brain, if I am still and close my eyes, I will fall over. Makes closing my eyes during yoga quite the spectator sport. !!! Usually my visual cuing is enough to keep me steady on my feet, however when that input is absent (especially in the dark or underwater) I will readily lose my bearings, which is uncomfortable at best and can be panic inducing at its worst – all without the benefit of first savoring a good single-malt.

The only way I can think to describe it is this… Perhaps you have found yourself sitting in a parking spot with the engine running? You put the car in reverse and you have your foot solidly on the brake while maybe contemplating whether to go to CostCo or Trader Joe’s next when the car next to you starts to back out. Concerned that it is your car that is in motion, most people have the tendency to apply even more pressure to the brakes but quickly recognize the correct source of perceived movement and easily laugh off the fleeting discombobulation. I get that jacked up feeling all the blessed time. Because I find that disorientation incredibly disconcerting, I don’t like to introduce potential unexpected motion into anything. Knowing that we weren’t going more than a foot should the jacks give way and the parking brake not hold was very comforting – thus my gratitude for the enormous steel pole to keep us from sliding to oblivion.

After we made camp, level or no, we were happy to reconnect with some dear friends and marveled at how well our seven kids played together, even while some of them weren’t feeling so hot.

The next morning, while Flight and Keeper went for a mountain bike ride with some of the other men folk, I went on a short hike with our girls.   The girls responsibly asked for water along the way and the irresponsible adult in the group had neglected to bring any, which was kinda the opposite of Flight’s and Keeper’s provisioning experience for their ride. Also popular was the request for Chapstick, which I also didn’t bring. This omission, however, was planned as instead I brought our own wildly popular (in our family) lip balm concoction. You can learn to make your very own here – highly recommended and way better than Burt’s Bees!

We all met up again as a gaggle at the base of the mountain where Keeper tried out bungie-cord assisted trampoline operations. Witnessing her brother execute double flips, Firebolt flat out said, “no way” was she doing that (!) and WoodSprite suggested she might ONLY consider taking a turn after further observing Keeper’s turn. As there was a bit of a wait, I purchased two bags of mining slurry, which the girls adroitly panned at an interactive flume and uncovered hunks of various gemstones, some quite sizable. $20 well spent.

We headed back to Davista to change into long pants and closed-toed shoes for our two-hour trail ride. A short amble to stables revealed some interesting posturing among the kids. When asked if they’d ever ridden before, both Keeper and Firebolt enthusiastically said yes, I’m sure mentally referring to their recent five-minute (each) stint in the saddle while at the Ingalls Homestead only days before, after which they likely fancied themselves quite the experts. Roger, perspective.

We decided to forego riding helmets as cowboys don’t wear them and in a text exchange Flight noted our Dutch friends would be mortified (Ik bied u mijn oprechte verontschuldigingen aan). The ride was hot and dry (and hot) and I was thankful for the Camelbak I toted.

Keeper and Firebolt easily managed their respective steeds and thoroughly enjoyed their first trail ride, although I’m not sure why they insisted on making crazy faces for the post-dismount picture. If anyone should have worn an unnatural expression it was she who was a wee bit sore having stood a little far from the saddle – and an English one at that – for more than 15 years. 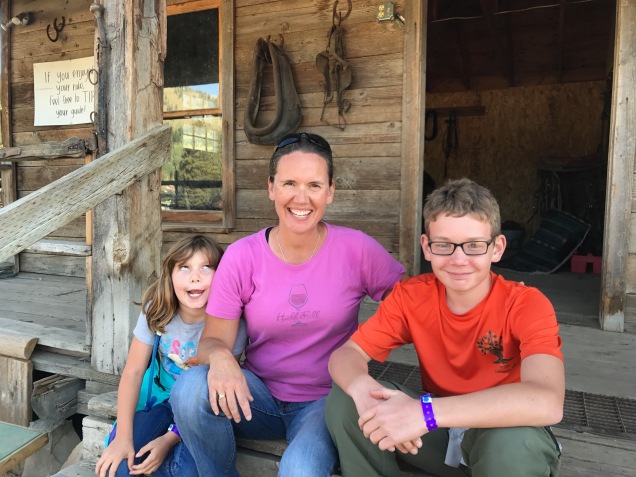 We enjoyed some gourmet burgers en famille and made our way to the other two families to bask in the anticipation bubbling throughout the campsite. A neighboring camper popped over to show us his recent artwork and share in some wine. Even Santa made an appearance to distribute candy – didn’t know he owned a pair of glove shoes. !!!

The kids were comfortable enough to want to ride bikes at all hours and were disappointed when we reined in their enthusiasm after dusk. Actually, we just encouraged them to do a night hike (on their own) instead and they seemed okay with that alternative.

As Flight mentioned, there was ample discussion about picking the BEST spot from which to view the eclipse. Flight’s Dad is notorious for conscientiously evaluating each and every available site at any campground to make sure the best one is found, so as to maximize the potential fun. Good enough simply isn’t. The apple has not fallen far from the tree and Flight has really been struggling with the BEST option. My vista checklist is pretty simple really: 1) hike to somewhere higher than the base (8000’), preferably with a killer view, and 2) be together as a family to observe the eclipse.

I’m good wherever that takes us…