Last week I received an email from Amazon to advise me that they had not heard back from the company who sourced my order of eclipse glasses and, therefore, they could not attest to the protection they may or may not provide were they to be used while staring at the sun. Roger, lawyer-speak for “if you go blind using these, it’s your own darn fault.” Well, shoot. Amazon kindly refunded my money, but we arrived at Grand Targhee without any critical protective eyewear to view the eclipse. Not good.

While I have a feeling I will lose my sight at some point in my life, I’m hoping it’s much, much later than, um, now. Believe it or not, acupuncture is a blind person’s occupation in Japan (I am not making this up), so I should be able to manage if it comes to that, but Flight really does need to be able to see to do his job. I was quite relieved to see that, because the resort was predicting 400,000 people would arrive for the event, they had plenty of proper glasses for purchase. I bought commemorative ones for our family, which we promptly donned and stared at the sun to check their efficacy. In hindsight that may not have been the best idea because maybe Grand Targhee also ordered through Amazon, but the glasses turned out to be just fine (as far as we know…). We did bring with us a couple of the Amazon pairs to potentially serve as camera filters should we try to photograph the eclipse prior to totality.

After exploring all other not-quite-the-BEST options, we circled back to hiking to the top of Peaked Mountain and I briefly wondered whether the mountain peak namers had run out of more creative options. Before we started our journey, we watched an educational video about eclipses, which was neither Panda Pop nor route planning (I’m just setting the story straight, see Flight’s picture below). My college roommate had sent me the link and we gathered around my phone to learn how the movements of the celestial bodies occasionally make totality so.

We took the cat track most of the way up the mountain and then walked the ridgeline near the top. Keeper seemed to have no difficulty with the climb (must be all that soccer…) and easily hiked to the peak.

The girls did reasonably well, but relied on Flight to tote them for a spell once we passed a motivational 9400’ of elevation. They each asked me to carry them at various times as well, but I repeatedly assured them that the offer was extended only by their father as I had brought a whole can of nope sauce for such requests. I did, however, offer encouragement to self-propel, singing “Just keep walking, just keep walking” to Dory’s tune, which was less than enthusiastically received.

As we climbed, the view to the west grew more expansive and breathtaking, both literally and figuratively, as did my anticipation for what we might see at the top to the east. I had no idea what to expect ahead, but WoodSprite did, as she reminded me several times during our trek: “Mom, I sawll (native Maryland pronunciation – we’re trying to expunge that from both of our daughters’ lexicons) these mountains yesterday. You’ll like them.” We were at last rewarded for our hard work with this stunning view:

Behind and below us the mountain valley sprawled out showcasing the town of Driggs and beyond, striations of glacial movements past defined our view to the south, and the Tetons loomed to the east.

Spectacular landscape in every direction, it was ridiculous. I have been referring to that vista as looking at the backside of the Grand Tetons since most people view them from the east side of the range (where the National Park is – and where we’ll be next week – !!!), but, really, who’s to say which is the proper side…

Having carved their own more direct mountain path, Keeper and our friends welcomed us when we summited. I promptly sat down to regroup and tried to take it all in. As I glanced around, the doubter in me offered, “Well, at least the hike was amazing should totality not live up to the hype.” Flight and I have since agreed that, even without the eclipse, that hike landed solidly in our top five favorites ever. 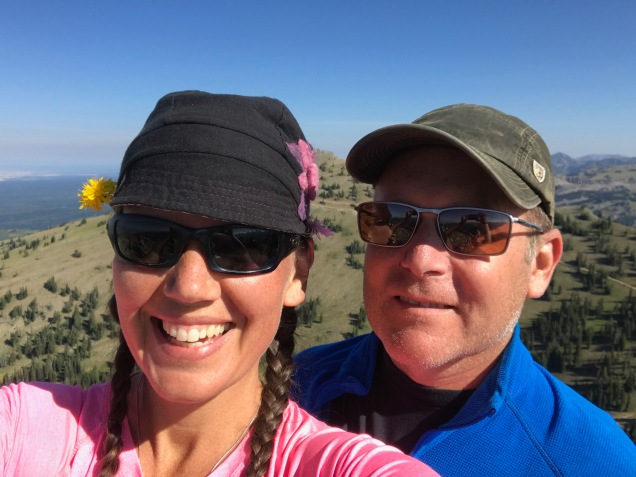 We claimed our vantage point and, after getting situated, we eagerly donned our glasses to check on the moon’s progress. Before the eclipse I was a little fuzzy on the whole event’s time line. I knew that totality was going to be little more than two minutes long where we were, and that I could grasp, but I really didn’t comprehend that the entire eclipsing process would take hours to unfold. More specifically, I got it intellectually, but I didn’t know how that would translate into reality. Initially paranoid about missing any bit of the experience and eager to engage the kids, I immediately threw out “Ooooh, look kids, the sun’s got a little bite out of it.” “Oh, wow. It does.” “Do you see how the moon is moving in front of the sun?” Pause, “Not really.” Hmmmm… Our first few minutes of intent eclipse observation assured us we could relax a little as the main event was going to take a while to manifest. 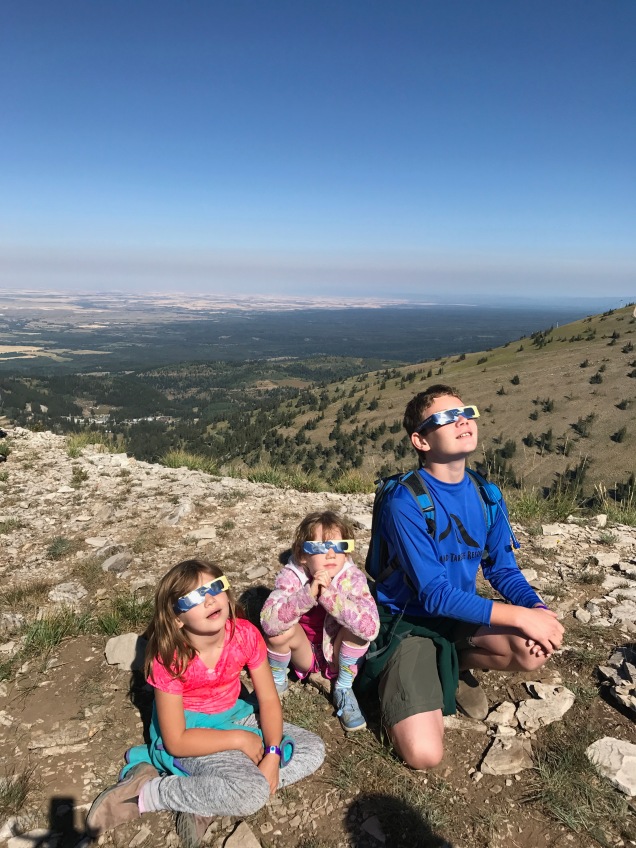 I entertained a passing thought, “I should have brought my knitting – or at least a deck of cards.” Idle time is tricky for me. Being still and listening is especially so – a character trait I hope (maybe?) to soften on this journey. We struck up conversation with a lovely couple from Driggs who briefly gave us a list of local area must-sees. Keeper actually said he was kinda bored. I tried to keep my inner 11 year old (who sits next to the doubter) from echoing his thoughts. “Mom, why is it going so slowly?” Initially exasperated and then, after a deep breath, I replied, “Because it’s the moon. Please try to be patient.” I shifted around to get a few more panoramic shots. “Hey, Babe, you’re standing in front of my (precariously perched iPhone on) time lapse.” Oops. No wonder it focused on not the sun – my apologies, Flight! Eclipse check again. “Hey, Mom, it’s like an orange crescent moon. A little one!” Excellent – now we’re getting somewhere.

As the light started shifting, the temperature dropped. Both the changes in light and the chill were barely perceptible at first, and we kept donning our glasses to make sure the moon was still making progress. The doubter kept downplaying the magnitude of what we might actually see, Operation Expectation Management well underway. At some point, when there was only a sliver of sun visible through our glasses, the light took on an eerie, otherworldly hue and everyone donned the extra clothing we had each discarded on the hike to the summit.

The temperature dropped nearly 40o when we were swallowed by the darkness. Beyond the wispy echo of my breath I could see Venus and a handful of stars. Witnessing twilight barrel across the valley and then engulf us in totality touched in me something very deep and very primal.

I instantly bonded with every person on Peaked Mountain, sharing in something I couldn’t quite name. Simultaneously tearing up and grinning like a loon, I so desperately wished I could open every pore of my being to soak up the experience in its entirety. I’m again riddled with goose bumps as I type this. 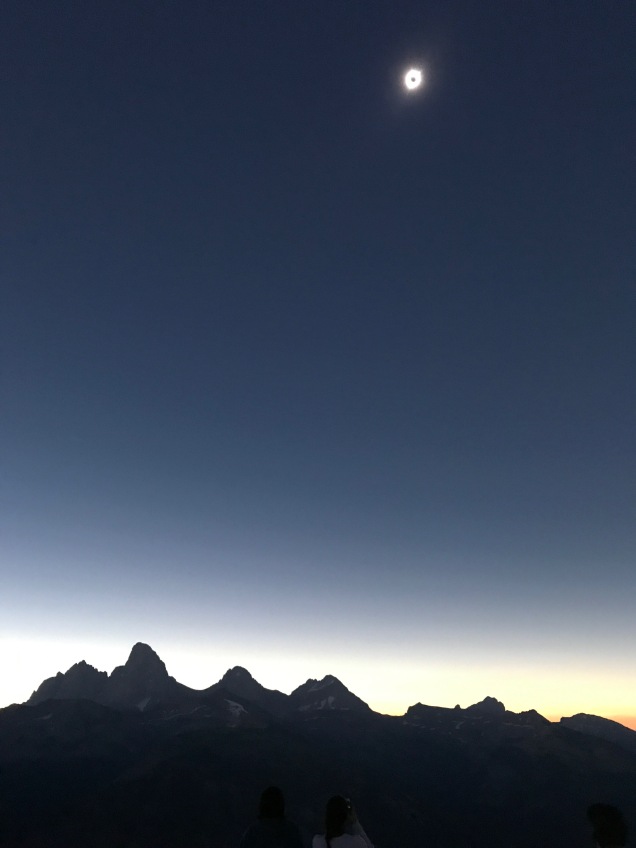 And then it was gone.  As muted daylight returned and steadily grew in its intensity, I couldn’t help but feel the profound loss of something wondrous even though I knew was never mine to begin with.

In preparation for viewing this once-in-a-lifetime event, I’d read about “Eclipse Chasers” and in my mind I had dismissed those people as being something akin to the groupies we met on our Def Leppard cruise (that’s a story for another time…). After seeing totality first person, I get it now. Totally. I may even have already looked up where we might catch the next one (July 2nd 2019 and December 14th, 2020 – Chile anyone?). Although these pictures can’t possibly capture the enormity of the experience, this is the best I could do with a filter-free iPhone.

With the return to some semblance of normal lighting and after a brief moment to gain concurrence among the group, it seemed only minutes later that we headed back down the mountain in a heady stupor. Keeper, Firebolt, and our friends took off at swift clip and Flight tried to ride the middle distance between them and me and WoodSprite before he, too, disappeared on the trail ahead of us. 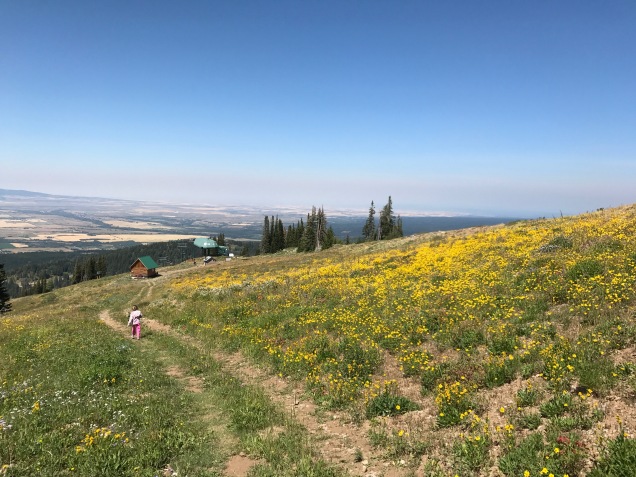 As WoodSprite and I ambled down the mountain, often holding hands so she wouldn’t let me fall, I tried desperately to catalog details of the eclipse in my memory bank. I was thankful her shorter legs made for a slower descent and our progress took longer still because we kept stopping to keep an eye on the (d?) eclipse.

A couple hundred feet above the resort base, we could no longer see the moon through our eclipse glasses, but presumed she was steadily continuing on her path as we progressed down the remainder of our own.