Park City I mean, of course.  Though actually it’s more the other way around – Park City isn’t Utah.  Which is also incorrect, because it’s very much Utah, but it’s always been somewhat of a thorn in Utah proper’s side, even from its early days as a rollicking mining town rife with all the things that tend to accompany a group of isolated, mostly single, hard-laboring men who spend most of their day underground.  Today it’s known more for its ski areas, Olympic venues, and the Sundance Film Festival, but there’s still a (completely unofficial and somewhat speculative on my part) sense that the rest of Utah, Salt Lakers in particular, wish it would just go away or secede, or maybe just pretend it and Utah don’t actually know each other.

I remember when we first moved to Park City and TC was working down in Salt Lake at the University, I would get a lot of vague comments from random people down the mountain along the lines of “why on Earth would you want to live up there?”  When pressed, the reasons for the distaste were never entirely clear, and ran the gamut from “oh, the weather’s just bad” to “the roads aren’t very good” (?), and when pressed even further, I usually got something along the lines of “it just isn’t NICE up there.” 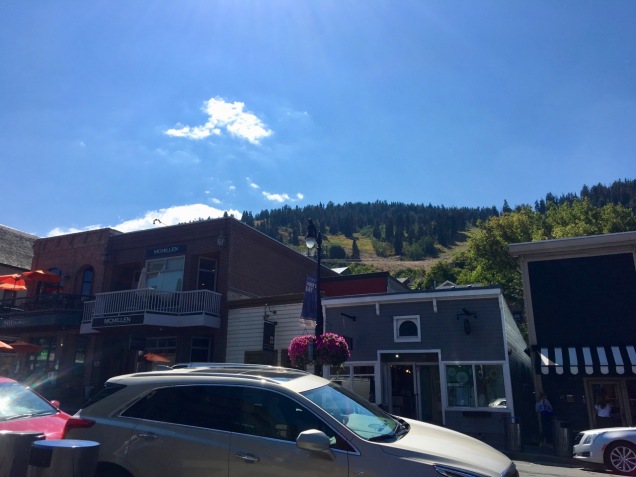 Tacco and I, on the contrary, found it very nice up there.  She lived in PC for 3 years, the last of which I joined her for after I returned from my last active duty Navy gig in The Netherlands.  This was the newlywed / no kids days, so they’re probably easy to idealize for just about anyone, but for me it was enhanced by being not yet employed (I’d interviewed with JetBlue but didn’t start for several months) and being a ski bum in a ski town with a season pass.  What a life.  That was the year I decided I’d get decent at snowboarding, and just about every day went something like this: get up, check the snow report, get my snowboarding gear together, drive Tacco to the base of Deer Valley where she sold lift tickets while finishing off her Masters degree, drive back to the coffee shop at the base of Park City mountain and have a cup of coffee while I waited for the lift to open, then “take a few runs, just to see how it is.”  In quotes because inevitably “a few runs” became the whole day on the slopes.  Why wouldn’t it?

ANYWAY… back to the present day.  Any time we’re in Park City, there’s a point during our visit when we look at each other and say “we could totally live here again.”  This time was no exception.

Our going plan, if you recall, was to stay a couple days and then move on to Oregon via Idaho.  We ended up staying just shy of two weeks, in increments of “just another day or two.”  The first few days were a fantastic blur of family and friend visits interspersed with a bit of relaxing time up at Jordanelle.  Tacco’s got a lot of extended family in Salt Lake whom we always love to visit, though it’s overwhelming when we only have a small amount of time (when we arrived we didn’t realize we’d be staying so long).  Her parents were also in town, which I already mentioned.  On top of that, I have an aunt/uncle and 3 cousins + kids who live there, and we managed to meet up with them on Labor Day evening, which was an outstanding visit.  Brisket, more garden fresh veggies than we could’ve eaten in a week, and invaluable catching-up time. When we lived in Utah 15 years ago, we completely failed to spend much time with them – huge mistake, as they’re an amazing family. 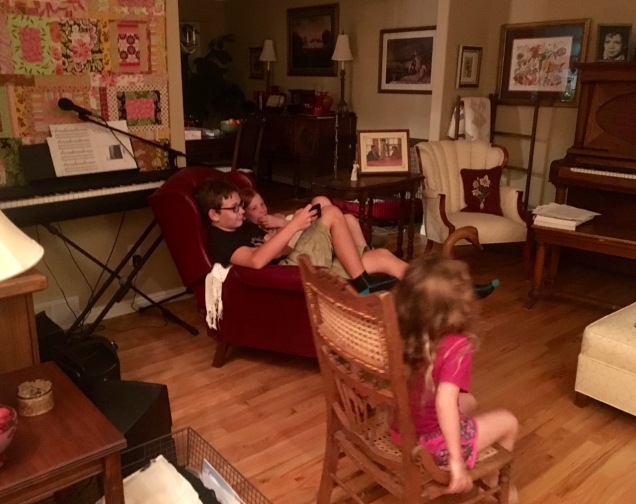 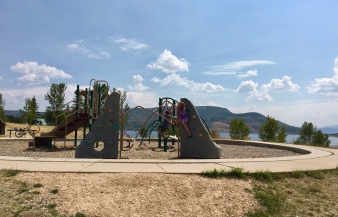 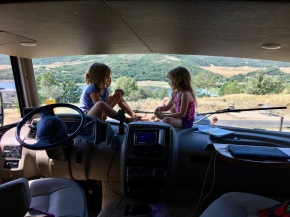 The next few I was away working for, but Tacco will cover that as well as the other family visits I’m sure.

We solved the “no place to stay Sat/Sun” dilemma by booking a hotel room at the base of The Canyons ski resort – correction, that should read The Canyons base area of Park City Mountain since the two merged a few years back creating one mega-resort.  I was surprised how reasonable it was, and the kids enjoyed the hotel beds / shower, as well as the live music at the base of the lifts.  Still no Wal-Mart parking lots! [knock, knock]

We also had dinner with the same friends (minus the dad, who was out stalking a deer near Moab) at a friend of theirs’ stunning house which they house-sit at times.  Check it out. 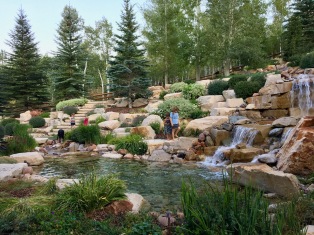 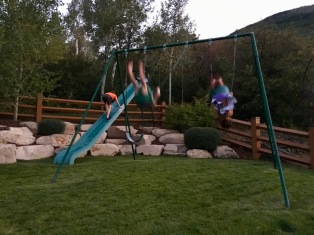 To be clear, we will never, ever live in a house like this in Park City or elsewhere.  This is high end, even for PC.  But there are a lot of these, some of which back up to the slopes.

After I returned from work things slowed down a bit (by necessity), and a combination of the continued burning of the Pacific Northwest fires in our desired destinations and flight convenience convinced us that we’d be better off staying in Park City all the way through the following weekend, when Tacco returned from her Navy duty back in DC.  This put us behind with respect to seeing Oregon, but felt like the right call; we sorely needed some “stop moving!” time.

Keeper broke the fishing curse with a little perch he pulled from the shore of Jordanelle.  It wasn’t the Kokanee we were hoping to pull in, but something is better than nothing.  Firebolt followed with a few even smaller ones.  The hook was almost as big as their bodies – how did they manage to snag themselves on it?  Must’ve been really really hungry. 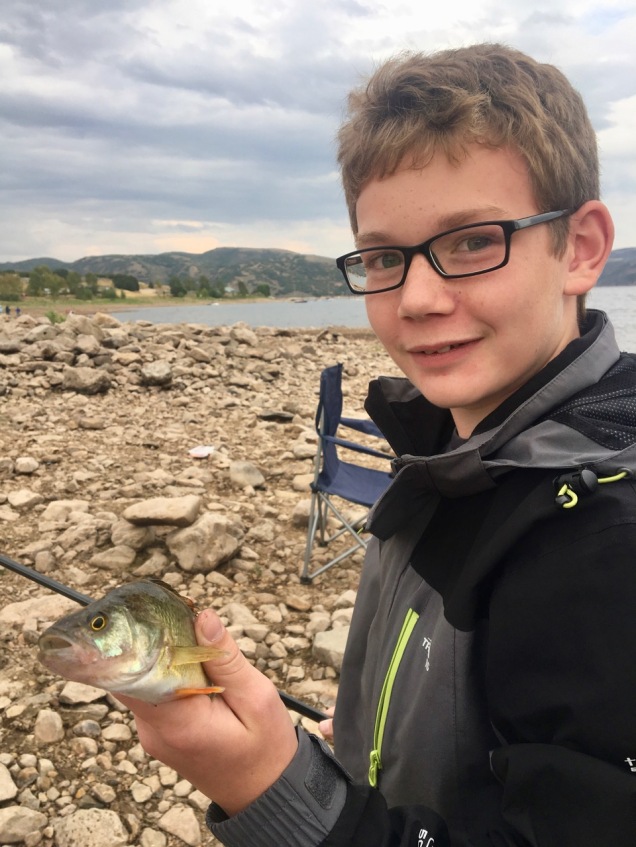 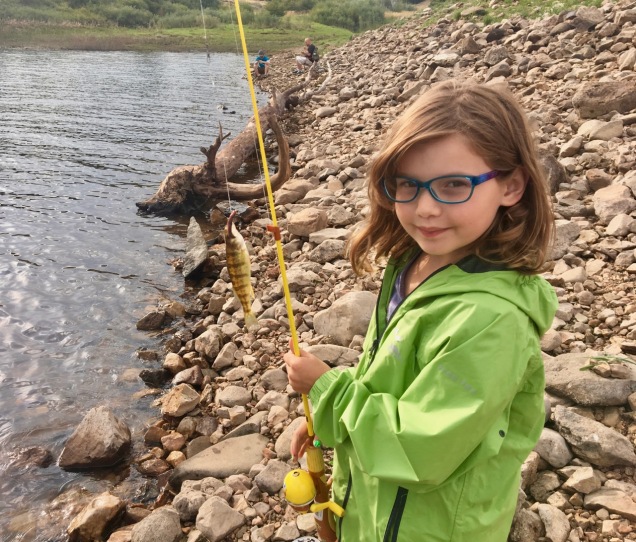 On the second to last day, with TC still away, I decided to treat the kids to all day passes at the base of Park City Mountain, where they have an Alpine Slide, Alpine Coaster, zip lines, mini golf, etc.  I think I prefer this sort of thing to an amusement park.  Though as the sole adult it was tricky to balance the supervision needs of all the kids (and by that I mean “oh maaann, I wanted to play too!”).  I’d have liked to throw the lift-served mountain biking into the mix, but that wasn’t to be.  We did find out that Firebolt is quite the climber – she got the highest of the three kids on the climbing wall!  And Woodsprite swallowed much of her fear and jumped on the ropes course and mini-zipline, which is excellent progress. 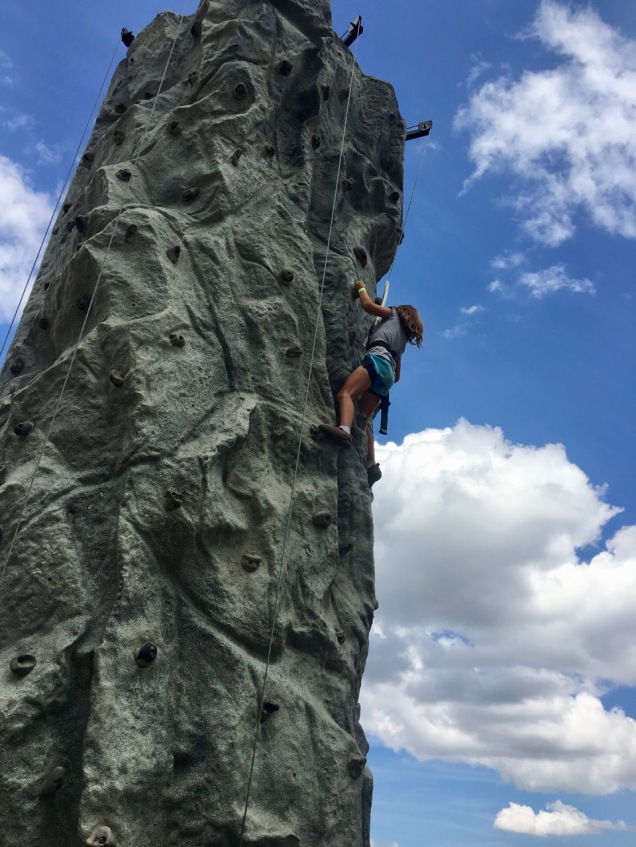 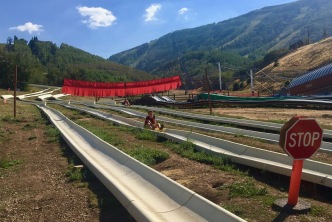 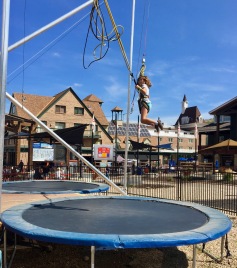 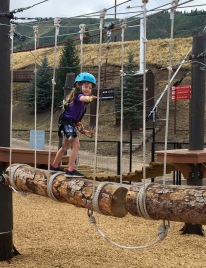 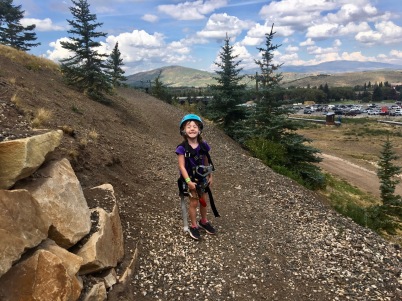 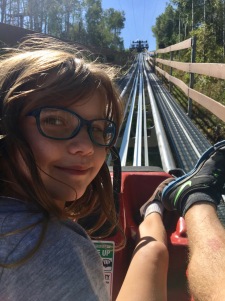 The kids were all very positive about Park City when we dialed them into our “we could totally live here” conversations.  There is a big wild card though – they all profess to not liking skiing.  Which is completely ridiculous since none of them know how to ski yet, but much like lacrosse is a center of gravity for kids in Maryland, winter sports are the same if not more so, I would imagine, in Park City.  It would be a bit pointless to live in PC and not have a desire to get on the mountain, and beyond that I would speculate that the non-winter-sports-loving kids have a harder time fitting in there.  Tangentially but perhaps more importantly, Keeper has yet to master a skill that takes a lot of effort to conquer.  Firebolt, too, but she’s only 8 – she has time.  It took Keeper several years for the light to come on with soccer / team sports – I’m hoping it doesn’t take that long with individual sports and skills.  In his mind he tries something once and if it doesn’t come to him immediately then he’s “not good at it.”  That’s where he is with skiing (he’s tried it exactly twice for a couple hours, 2 years apart – he never had a chance).  Not that I find it necessarily important that he ends up a snow sport wizard, I just fervently want him to experience the pleasure of mastering a difficult skill.  So I guess what this all means is that we need to explore all of this a bit further.  We’re talking about taking a month or two this winter, whether or not our house sells, to park the motorhome and do a month in a ski town.  Originally we were thinking Alps, but we’re now leaning more toward a return to PC in February-March-ish.  If we end that month with 3 slopes-addicted kids, that will change our calculus quite a bit.

Which leads me to what we took most from our Park City time (other than the home-offer story, which Tacco either has already covered or will shortly) — a great set of discussions about where we want to live at the end of this.  It’s a recurring theme of course, and we only approach an end decision through the tiniest of baby steps, but we spent quite a bit of what down time we had reflecting on how much we enjoyed being in a place where we already have a few connections and people we want to be around.  Park City would be near the top of the list without any of that due to its exceptional amenities and the general vibe there, but we’ve got both family and friends nearby, and that is starting to feel like a factor we need to weight more than we have been.  We were fortunate to have family already in Annapolis when we moved there, and I think it’s easy to forget what a difference that made.  Though we’ve both moved to several places where we didn’t know anyone, this was pre-kids and often pre-marriage, and always under the auspices of a Navy squadron, where a support system is built-in.  It’s tough to envision what a move to, say, Portsmouth, NH would look like when we settle in without a name to put in the “In Case of Emergency, call _______” space in the many sign-up forms for the kids.  It’s doable, to be sure, but do we want to put ourselves through that?  I don’t have an answer yet, but we’re inching our way there.

Still trying to work out where in Oregon we go next.  We had three general areas we intended to spend time in: Bend, Hood River / Portland, and the Coast.  We’ve realized that we can’t do all three now and are going to need to pick and choose.  Plus it’s all still on fire, and the weather is taking a turn for the worse, though in some sense we’re staying just a tad ahead of it.   We just learned that it’s supposed to snow all week in the places we just left — chasing mild weather indeed!

2 thoughts on “Utah is not PC”