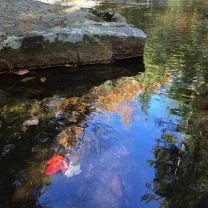 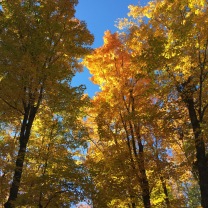 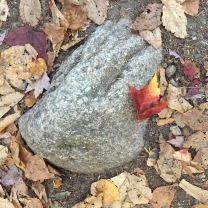 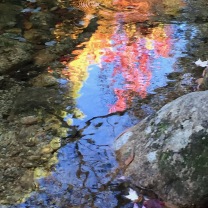 These pictures are from our jaunt up to New England last October and beautifully captured the  season’s brilliant colors.  I love everything about Fall, especially shellacked decorative gourds.

Totally kidding (about the last part).

We only use real ones (even when we’re not in a house on wheels), and ideally those that we grow – or that I pick out at the store all by myself.

Many may appreciate Spring for being the season ripe with possibility (and it is), but I prefer the transitory phase of Autumn. I welcome this seasonal change as a time to reflect (kinda what this whole journey is about), take stock of my numerous blessings, enjoy plenty of hearty meals (I now have many such InstantPot miracles on tap), and savor the last of the garden’s fresh goodies (in previous years we have enjoyed caprese salad made from our garden tomatoes all the way until the Army-Navy game) while preserving as much of the rest as possible before hunkering down for winter.

Truth be told, I do enjoy sampling the season’s newest pumpkin-flavored snackety snacks. There are so many different ways to enjoy the flavor, which really isn’t the bland taste of the gourd itself as Keeper noted upon recently sampling some, but more so how well it can serve as a delivery mechanism for sugar, cream, and butter (and the traditional warming spices of cinnamon, allspice, cloves, ginger, and nutmeg, of course). I appreciate that the stores seem to be marketing directly to me this time of year with all the different ways pumpkin can be packaged.   On our most recent trip to Trader Joe’s I purchased several cans of organic pumpkin in anticipation of the first day of Fall, as that’s the critical ingredient for many of my favorite seasonal recipes, the most notable of which is for Pumpkin Chocolate Chip Cookies.

Based on a Mrs. Fields’ recipe, the dough can support 1.5 cups (combined) of anything you want to add: nuts, seeds, white chocolate chips, dried cranberries, unsweetened dried coconut, dried blueberries (Trader Joe’s are the best – far better cooked than raisins), chocolate chips, or (gag) raisins.  Although, why you’d want to ruin perfectly good cookies with cooked raisins or waste perfectly good raisins by baking them in cookies is beyond me. Sort of a purist in this regard, I prefer this taste of autumn solely enveloping Ghirardelli bittersweet chips, which truly results in a divine combination.  We’ll be making some of those tasty morsels as soon as we can manage it.

I’ll share a few more of our favorite Fall recipes as we make them, but let’s get back to the intent of this particular blog…

We made our way south from the Flarp-covered Oregon coast to be entirely underwhelmed by the campground that, despite being named Del Norte Coast Redwoods State Park, had not a single stately redwood in view – at least none near the campsite where we were parked. This was as close as we got…

After wedging ourselves snugly into a spot (seriously, it was so tight we couldn’t even put our awning out for fear of damaging it or some non-redwood trees), we busted out the Instant Pot for a near-instant pot of hearty goodness (no kidding, we went from pulling frozen chicken thighs out of the freezer to white chicken chili in about 40 minutes) and spent the night.

And one night only.

Being married to a “Best Campsite” seeker has its pros and cons. Sometimes it takes longer than expected to discover said idyllic locations, but the search far more often than not pays off. Once a not-the-best campsite has been identified, however, especially if we’ve already reserved and/or are currently occupying it, the fervent search begins anew. I am pleased to be the beneficiary of such ardent quests, even though I may sometimes mock the process.

Flight’s efforts came through yet again. After a quick brekkie, we pulled chocks a day early and relocated to a much roomier Patrick’s Point State Park by way of the Redwood National Park, where we got our Redwood fix at last. I was still energized by our descent from the Cascade Mountain ridgeline where we were flanked by immense old growth trees, but I couldn’t wait to get a new energetic hit by being among the Redwoods.

We stopped by the Hiouchi Ranger Station to acquire our Junior Rangers’ latest quest books before we took a walk through The Grove. These incredible beings have been around for centuries. I loved this display at the Ranger Station showing when various events had happened throughout the life of this particular Redwood until it was cut down only decades ago.

I had thought that one of the Redwood’s most impressive engineering feats was its ability to move any requisite water from its roots to the far-reaching branches hundreds of feet above, but have since learned from Junior Ranger Firebolt (and other sources) that while the inner bark provides such a water-movement mechanism, the tree doesn’t exclusively rely on this method. Instead, Redwoods appear to have the capability to absorb water from the local environment – AND can transpire as much as 500 gallons in a day. Because they depend on living in a moist habitat, they are capable of contributing to their surrounding microclimate’s moisture content or drawing from it as necessary. Whoa!

If that wasn’t cool enough, I noticed they also tend to grow in rings around the remains of another tree. I had assumed such a growth pattern was due to the close range in which the tiny pinecones (only just larger than my thumbnail!) were dropped and then reseeded. Not so. Apparently they can clone themselves. And, as it would also appear, so can Flight. If you have seen any pictures of WoodSprite, you may have noted that, despite my having grown, incubated, and given birth to that child I seem to have contributed no genetic material to her existence. Except maybe her sass, which does seem to be a dominant trait prevalent both throughout my own family tree and having manifested in all three of our children.   So maybe the maternity test can wait…

Sorry, where was I? So these “faery rings” of newer trees (these were my exact thoughts upon seeing them, but learned that’s actually a valid term) that spring up surrounding an old tree are actually little clones that take advantage of the well established parent’s root system to get a leg up on the growth chart. Pretty amazing – who knew?

We parked Davista at the Ranger Station and popped across the highway (in the Suburu) to go for a walk among these colossal beings in The Grove. I had vague recollections of previously seeing these giants almost 20 years ago and wasn’t sure what I would take away from our next encounter. Sure, they were big, that much stuck with me, yet now with a few more years of being in my own body, some more traumatic than others, I was much more deeply awed by their presence. I repeatedly felt as though I should genuflect as I made my through this sanctuary. Resisting that urge, I instead let the others in our gaggle move on ahead and engaged in some qigong, surrounded by ring of Redwoods. Before I could take my shoes off to better connect with The Grove, I was “Hey Momma”-ed again. Ah, well, at least I got some decent pictures… 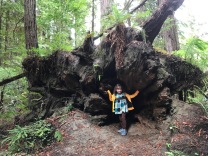 One of the Junior Ranger challenges was to draw a “nursery log,” the term assigned to one of the downed behemoths whose decomposition fuels the growth of other forest flora. In addition to various fungi and countless fiddlehead ferns, redwood sorrel sprouts up from all nursery logs:

And it’s edible. With a tangy lemon-flavor, it perfectly complemented the fish Flight caught. No wait, that hasn’t happened yet. Much to Keeper’s delight, I didn’t learn that redwood sorrel was edible until I am now writing about it or I’d have sampled some in the forest straight from the source.

Savoring the energy of the place, WoodSprite and I fell behind the rest of our crew. Really, you can’t rush sharing qi with a colossal being. 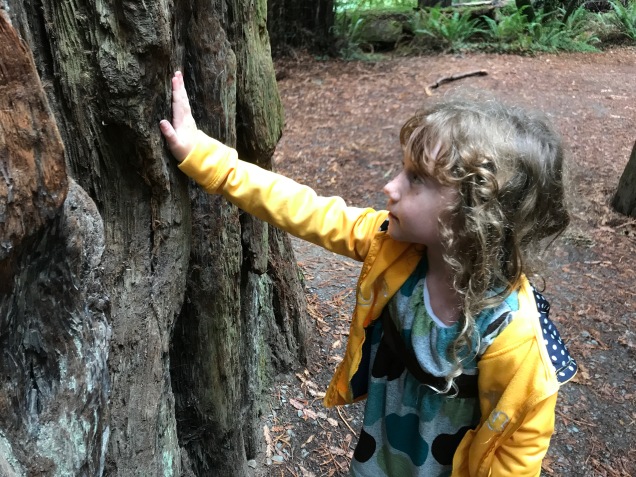 We took a wrong turn and ended up down by the water where we enjoyed a few minutes along side the rambling Smith River.

When we returned to the gang, the path took us between two downed soldiers. For some reason fallen trees always seem indecently exposed, no matter how long it’s been since they tumbled. Massive root complexes that no light of day should touch are disgracefully on display and most certainly should not be. I’m always torn between wanting to stare or avert my eyes. I had to take this panoramic photo so you could ride that fence with me:

I’m still scratching my head trying to figure out exactly how that happened.

Okay, one last fascinating Redwood tidbit before we retire to Patrick’s Point… Contrary to the deep network I had imagined rooting these giants in place, I learned their root system relies more on breadth than depth for stability, meaning their roots rarely dive deeper than eight feet below the surface. So manifesting great strength, yet with enough flexibility to withstand powerful winds, they epitomize the elegant yin-yang duality of the Dao.

I left The Grove feeling a tumble of frail human emotions, but mostly awestruck by these glorious beings and eager to return for my next Redwood energy fix.