When I was in college, I had a vague notion that there was a tailgate “thing” happening there on football game days… that it went further than people setting up portable grills behind their cars in the parking lot.  Don’t get me wrong, I’m not about to try to initiate a battle royale of college tailgate scenes — I’ve never been to an SEC home game, and I’m pretty certain that the huge Midwest State schools throw massive benders on Fall Saturdays.  Just saying there was much more happening on the tailgating front than I knew at the time.  I previously mentioned that the Stanford campus is enormous, and there are multiple “groves” (read: areas with nothing but widely spaced trees) surrounding the stadium and extending to the north and west for dozens of acres.  It (the whole campus) is nicknamed “The Farm” for a few reasons, but all the open space is a reminder of its origins.  Every home game Saturday we’d make the trek out to the stadium and find the groves full of not just parked cars, but elaborate tailgating setups, with major food and drink production / consumption, generators feeding DJ stands, games, etc.

It didn’t leave much of an impression on me because I was 18 and had a very small sphere of that-which-I-paid-attention-to.  What I discovered since, though, is that people plan these tailgaters for months.  And that not only are the groves used for game day parking, but certain areas will let RVs come in, set up, and camp.  AND… camp not just for game day, but for two days prior and one day after.  Of course you need to be a season ticket holder to qualify for that privilege, but secondary markets being what they are in the internet commerce age, those tickets aren’t difficult to come by.  So what a perfect idea for a family who’s living in an RV anyway and needs to park it – hang out at the alma mater, tailgate with friends who do this regularly and promised to save us a spot, and catch a game.  Score!

The plan morphed a bit when we started looking at the no-kidding logistics of boondocking (that’s camping in your RV without water, electric, or sewage hookups – another term I learned relatively recently) on a semi-remote corner of a college campus rather than hanging out at my parents’ house where we had just about everything we needed.  Plus there was the matter of my work trip, which cut into what would’ve been day 1 of campus camping regardless.  As much as I would love to see my kids, over the course of a weekend of campus tours, class auditing, and interaction with students, become enamored of Stanford and resolve on the spot to do whatever it takes academically and extracurricular-ly to ensure eventual admission…  Sorry, I couldn’t finish — that just got sillier and sillier.

So instead, we opted to mobilize before dawn on Saturday, drive down to Palo Alto, set up Davista, catch a few hours of sleep, then do the game day thing, followed by cooking out and spending the night.  This turned out to be an excellent compromise.

Another thing that sticks in my memory of college days is that football Saturdays always always seemed to be hot and sunny, no matter what the rest of the week had offered up, weather-wise.  Saturday, September 30th was no exception.

My good college friend and old housemate had set up the main tailgate event on his mother’s regular RV spot, which we parked a few spots down from.  He had invited several other friends from our old “draw group,” which is (or was?) the Stanford term for the group of people you choose to enter the housing lottery with so that you end up in the same campus housing unit each year.  Basically roommates / housemates.  They’ve all gone on to success in widely varying fields, and every opportunity I get to see them (which are exceedingly rare), I thoroughly enjoy it. 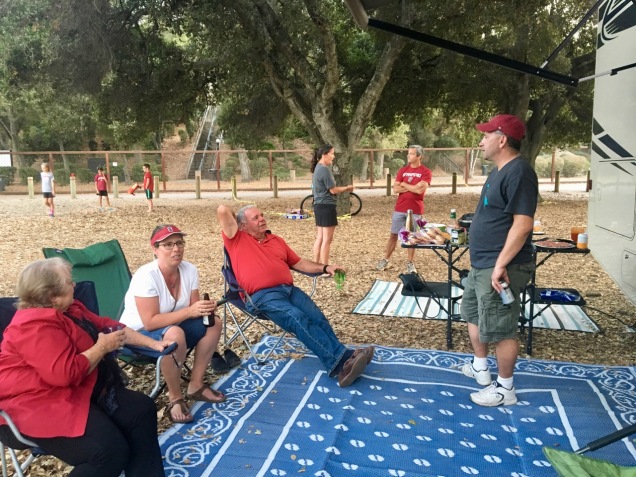 Adding to the fun factor was having my parents there too.  They hadn’t seen some of my college friends since graduation, and my dad made the laughing observation to one of them that he could recognize all of them, but that we were all “a little more grey and puffy.”  That went over way better than it sounds like it would’ve, and is actually reasonably accurate, though most of them have managed to stay in far better shape than I. 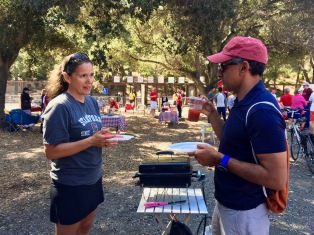 We beat the Sun Devils handily, and the kids gamely sported the school garb and braved the direct sun for about 3 quarters, which was longer than I’d expected. 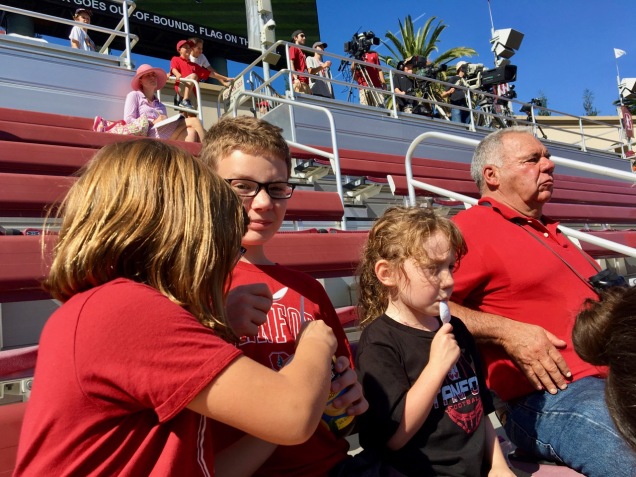 Even better, I managed to drag the kids (with Tacco’s help) post food/sun/game out for an evening walk around campus, just so see what was going on.  As it turned out nothing at all was going on, at least not in the main areas – I’m sure the dorms and fraternities were another matter – but it was a few miles on a warm night and a chance to show the kids a glimpse of what college life looks like, minus the keg-stands.

Firebolt still insists she intends to play soccer for Stanford, so mission accomplished I suppose, though if that’s the case we really ought to get around to having her play some soccer. 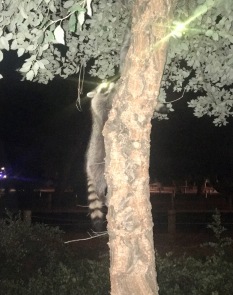 Tomorrow I leave for another trip, and the busy-meter swings back into the yellow-orange-red zone as we have several events and visits planned, as well as multiple campsite reservations down the coast.  But the slow-down time has served its purpose.