It’s a tough choice really… Upon our arrival in Alamo, Flight’s parents had reminded me that it was tarantula season in nearby Mt. Diablo State Park. They suggested an outing to check out the enormous, hideously hairy, burrow dwellers that were out and about in droves. In the recesses of my can’t-unsee-but-would-prefer-to-banish memory bank I recall seeing pictures of my niece and nephews from years ago holding same tarantulas (even the male spiders live more than a decade) against the backdrop of the Mt. Diablo. A closet arachnophobe (maybe my 8-year old self was scarred by this scene from my favorite movie?), I have the heebee jeebees even now as I type this.

Were I to be asked about touching tarantulas on purpose, “No, thank you,” would confidently escape my lips before the question’s second syllable was uttered. However, since I didn’t want to come between my children and a cool formative experience with their grandparents, I remained silent in the discourse. I deferred to the three who would potentially be picking up the wee beasties and posing with them for photo ops because I certainly wasn’t going to do it.  Unfortunately (?), our kids were also less than enthusiastic about such an undertaking and I could not want to try to talk them into going.

After our Stanford tailgate, football game, and overnight on the Farm, we had a small window of opportunity for some girl-bonding time following a late lunch. I had intended to enjoy a lovely outing with our girls during this time, but instead made a debacle of the remainder of the afternoon.

Instead of stalking tarantulas, the girls and I opted to ride our bikes down the local trail to feed carrots to some of the neighbors’ ponies. Okay, so they were actually horses, but nominally downgrading the cute factor associated with our chosen activity doesn’t really change the story. Flight’s parents live along a lovely paved hiking/biking trail that runs for miles, connecting several of the nearby towns. Our agreed upon destination was maybe 1/17 of a mile down the trail, literally less than 100 steps away from Davista’s door. 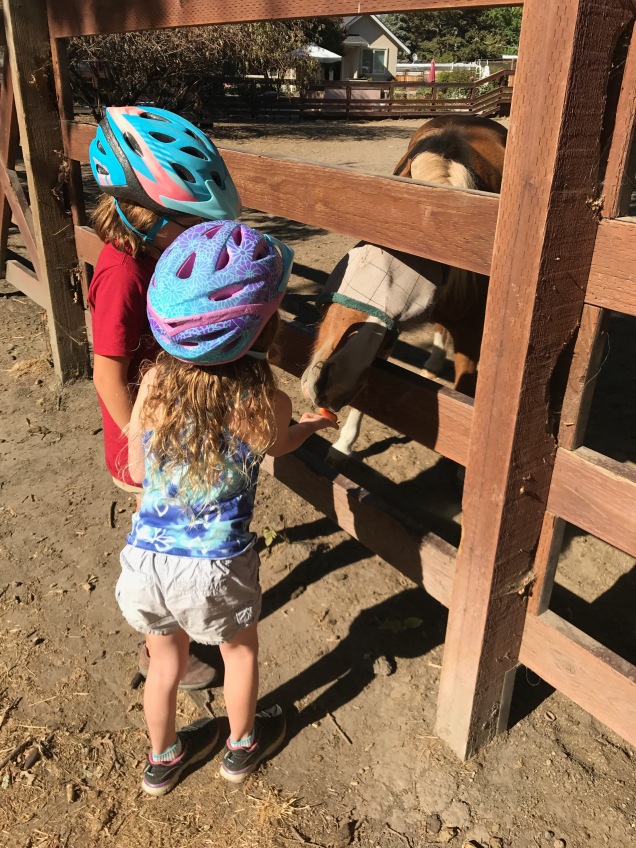 After the horses gobbled up every last carrot the girls offered, I got an idea. An awful idea. I got a wonderful, awful idea. Encouraged by the girls’ enthusiasm to take their bikes out on the trail, I thought we could maybe ride a little farther down the path as I knew one of the houses along the trail boasted a menagerie of farm animal statues and would be a cool thing to see. Great plan, right? Unfortunately, I, um, neglected to get buy-in from either of my fellow riders before extending our excursion, which is what naval aviators would refer to as a “Below in headwork.”

That probably warrants some explanation…

While earning their wings of gold, naval aviators are graded on every aspect of a training flight, namely how well you: preflight the aircraft, can speak to the aircraft’s interconnected systems, brief the weather and its impact on choosing alternate airfields, complete your checklist items, execute any and all emergency procedures, and, of course, preflight, start, shut down, and post-flight the aircraft – and everything in between. Most critically assessed, however, is your ability to think things through while sitting in the hot seat. That overarching aspect of evaluation is called “headwork.”

When Flight and I were in our respective flight training pipelines back in the day, for each of these graded criteria you were awarded an “above (average),” an “average,” or a “below (average),” meaning you outperformed, were on par with, or deemed a total knucklehead when compared to your fellow aviators in training, respectively. Two “belows” on graded criteria in any one flight constituted an event failure or a “down,” which required a performance review board (or PRB = the opportunity for you to own your shortcomings before a host of flight instructors) and, if given the opportunity, an event refly. If you achieved two downed flights, you would be asked to find a new occupation instead of flying aircraft for the U.S. Navy. Ouch. If you chose a less than ideal alternate airfield, that wasn’t nearly as big a deal as not being able to effectively think things through, most especially in self-induced crises. Receiving a “below” in headwork was just plain bad juju.

And I earned mine today.

Selling the girls on biking over to feed the horses was one thing. Asking them to ride almost 34 times as far and uphill (both ways) appeared to go beyond the flexing capability of either sleep-deprived young lady, especially Firebolt since Flight had raised her seat higher than her confidence allowed and, lacking the proper tool, I had been unable to lower it. And I insisted she ride anyway. We’re only going to feed the horses, I had assured her.

Understandably (maybe?), upon being charged with riding further, Firebolt felt as though she had been hoodwinked and, far from tacitly accepting this change in plans, loudly complained with every pedal stroke that moved us farther down the trail and away from relaxing at Grammy and Papa’s. At one point she actually refused to cross the next road, even when I reassured her that the “farm” we were aiming for was most definitely on the next block. While I was starting to realize I had lost all street cred and thought I might never find said “farm”, I truly didn’t understand her misgivings about our quest – I mean who wouldn’t want to see Shawn the Sheep, right?

I finally managed to coax Firebolt across the street, at which point she subsequently flat out refused to move any further. Stubborn as they come, that one. No idea where she gets it… Fortuitously (?), Firebolt had dug in her heels steps away from one of the trail’s few water fountains. While Firebolt had been fighting against making any forward progress, WoodSprite’s accompanying whining harmony had been to the tune of being oh so very thirsty. I thus earned another “below” for today’s evolution, this one for failing to pre-flight and pack our provisions, which currently numbered zero. Not even sunscreen I noted with a glance to the cloudless sky. Crapitty crap, crap, crap.

WoodSprite dismounted and was helped to slake her thirst by none other than her exceptional big sister who held the bubbler valve for her while she gulped down some of the city’s best warm water. Frustrated with Firebolt’s recalcitrance (and my own inability to manage any “averages” on this event, let alone “aboves”) and well past my own tolerance for whining, I mumbled something to the effect of “I think it’s just up here, I’m going to check” and pushed forward on my bike to further investigate. I stopped only about 20 yards beyond the water fountain where the “farm” serenely awaited us, but that short separation was past the comfort level for the girls, neither of whom had heard my explanation for moving on, seemingly without them.

“At last – there it is!” I thought, much relieved, and gave thanks for having the target in sight. My gratitudes for having reached our destination were cut short, unexpectedly interrupted by caterwauling erupting from both girls as they each burst into tears. Firebolt’s angry tears were accompanied by an incredulous littany, “That’s IT?! THAT’s what we’ve come to see?! That’s not even a real farm. Those animals aren’t REAL! You didn’t say they weren’t REAL!” WoodSprite’s alarmed bawling, “Mommy, don’t leeeeeeeeeeeeeeeeeave… Moooommmmeeeeeee!!!” was proclaimed in a panic, as she tried desperately to get back on her bike to catch me before my presumed escape.

Disgusted at having been further bamboozled, Firebolt boycotted viewing the animal statues altogether. WoodSprite, after recovering from her perceived abandonment, did venture forth to check them out, but was similarly underwhelmed by our objective. She placidly communicated her disenchantment in one long, cool, assessing look that, with the candor of the very young, spoke volumes.

I heard her loud and clear, “Three Belows. Hey Momma – that’s a down.”

After a few painful moments taking in the “farm,” all of which I spent wondering just how I had gotten us here, we remounted our rides and unceremoniously cycled back to Grammy and Papa’s, hot, tear-stained, and eager to retreat to our own corners. Exceptional execution of intended girl-bonding evolution. I think, perhaps, holding tarantulas would have been less traumatic…