So I’m a little embarrassed to admit that before we made it to Zion National Park I wasn’t exactly aware of the daring adventure that takes one to Angels Landing.  I was unaware it was a thing and only after seeing it showcased at the Visitor’s Center did I realize what a monumental hike it is.  Many argue it’s the most popular hike in Utah, which shows how much I know, and, now far better educated, I would venture it’s certainly the most harrowing.

Although it is only 5.2 miles long out-and-back, the hike to Angel’s Landing has an elevation gain of 1500’, which became very evident along our trek.  Once you ascend to 1300’, this trail follows a ridgeline only a few feet wide in places rising above thousands of feet of nothingness to either side.  Does this sound like a good idea to anyone?  How about with three kids?!

When visiting in the warmer months, I certainly understand the draw to starting such an undertaking in the wee hours of the day.  Since it was November and we had schooling to complete first, we tackled our adventure in the later part of the day, despite the threat of limited daylight.  Anticipating an early departure the following morning, at least before the Visitor’s Center and other stores would be open, we were eager to add to our wardrobes and our Junior Rangers needed to be sworn at their 6th National Park.

Following WoodSprite’s direction, we made our way into town and loaded up on some new Zion NP gear. 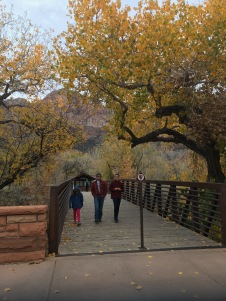 Then our girls raised their right hands…

Mission accomplished, we enjoyed some lunch before beginning our journey.  Just as the previous day’s hike began, it all seemed rather innocuous at the start.

We had plenty of water and plenty of snacks, making sure to stop every so often to keep the youngest members of our Flight fueled and mobile (read: not complaining).  Our first such rest stop provided a glorious view of the river valley.

While we enjoyed our snack safely tucked away from the trickle of other visitors, Flight and I speculated how much more foot traffic there must be during the summer months and gave thanks again for visiting this natural wonder in November.

And the next stop… 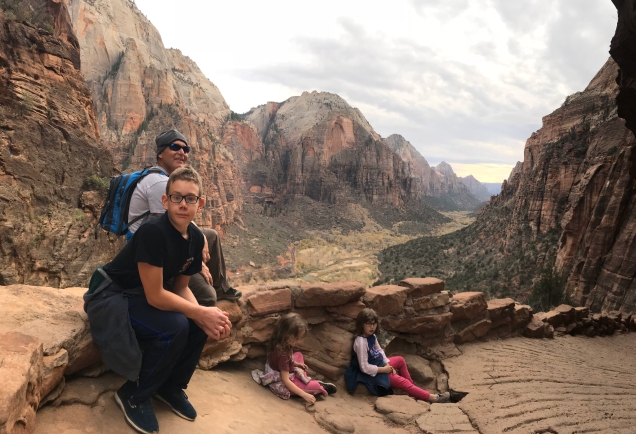 Shortly after this rest, we made our way through “Refrigerator Canyon,” where the temperature noticeably dipped. 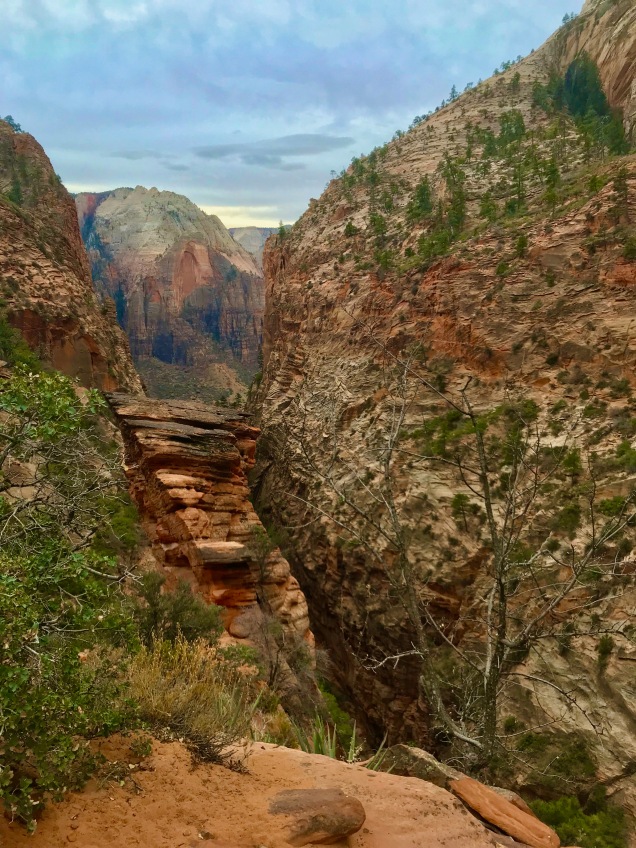 Appreciatively cooled, we made our way towards the bottom of Walter’s Wiggles.  This particular stretch of trail is worthy of its mention.

While my picture might capture only a little of the effort required to negotiate these 21 varsity switchbacks (and this was taken on the way down as I didn’t think to document what lay ahead while trying to climb…), I found this picture online that better communicates the topographical challenges.

There was considerable huffing and puffing as we continued to put one foot in front of the other, but we finally arrived at the point where the views are spectacular and only the truly daring (one, two, three – NOT IT!) go any farther.

Keeper, WoodSprite, and I sat down to enjoy another snack and Firebolt and Flight went just a little further to explore the remaining 0.5 miles to the summit.  They returned from their preliminary scouting trip and Flight reported that we should wait until our team is a little older.  Okay by me.  Firebolt was maybe less inspired…

As is so often the case, pictures fail to capture the incredible landscape.  Let’s just say it was breathtaking – and not just from climbing Walter’s Wiggles.

True to out-and-back hikes, we were favored with all new views on our return, which were enhanced by the waning daylight. 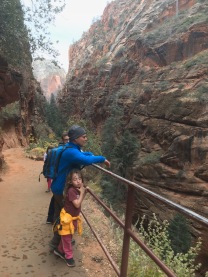 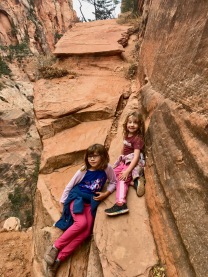 Fortunately, I did some research AFTER our outing and learned that this particular hike necessitated two helicopter medivacs in one day last year.  This vertigo-sufferer felt no shame in not going the extra mile…