[For any who may not know: We’re not using our real names, click here for details]

One of my major concerns about halting our progress back in December, was, as a friend put it, “re-establishing escape velocity.”  Not only had we attained a comfortable momentum in living on the road, but we were really enjoying ourselves.  Bringing it all to a screeching halt, re-integrating into our previous life, and then trying to start all over again a few months thereafter seemed beyond daunting when we tried to envision it.

It turned out to be considerably less daunting than we had imagined.  It helped not to think about it too much.  We basically just set a date and then forgot about it.  Which isn’t entirely accurate, but what we did do was pack our schedule so full with putting-the-house-on-the-market tasks that we really didn’t have time to consider anything else.

I did do some pre-planning and campsite reserving (we learned our lesson last time about staying ahead of that), so I was mentally ahead of Tacco in that particular arena at least.  But two weeks, one week, even down to just a couple days ahead of our departure date it felt absolutely nothing at all like we were about to upend our lives again.  Several times we stopped whatever we happened to be busy with, looked at each other, and tossed out something to the effect of “wait… check me on this, this can’t be right.  Are we seriously leaving this house for good and living on the road again in xx days?”

It was right though.  And if things go as planned, not just the house, but the life.  Everything.  Crazy.

Preparations were orderly right down to the last day – anyone surprised?  Our intention was to fly from DC to Los Angeles via a connection in Boston, leaving early on Wednesday, March 21st.  We had emptied and unplugged our fridge, made reservations for a fun dinner out on Tuesday night, and figured we would have the rest of the night to tie up any loose ends prior to bolting for the airport at 5:30AM.  But I didn’t intend to have any loose ends to tie up.

And then… here’s the weather forecast for our departure — the day we had planned on for the past three months:

Yes, biggest snowfall event of the year for Maryland.  Wintry mix, freezing rain, sleet, then snow and more snow.  10” forecast, and oh by the way that storm was set to move up toward Boston immediately thereafter.

The cascade of flight cancellations began on Tuesday morning, and within an hour or so the entire schedule out of BWI and DCA for Wednesday was gone.  There go plans A through K.  Tacco and I had multiple flip-flopping (and each time conflicting, amusingly enough) gut reactions about how to proceed.  The one general tack was to do whatever we possibly could to get to Boston ASAP, get a hotel for the night, then escape to the West Coast before the storm hit Boston.  The other was to relax, have a nice dinner, watch a movie, and don’t even think about leaving Maryland until the storm cleared and the scads of displaced passengers had worked their way through the system.  We didn’t know how long that would last, but my best guess was Friday.  The latter approach held considerable appeal, given that leaving Tuesday afternoon/night rather than the following morning would force us into crisis mode with respect to getting the house ready to leave, and there was no guarantee we wouldn’t get stuck anywhere along the way, including at the airport in DC (we didn’t have a car), or at the hotel in Boston.  Yet we did have a plan, and people expecting us, and the kids wanting to scramble on Joshua Tree’s rock piles on Friday (no space available next week)… shouldn’t we at least try?

Sparing you the gory details of our pulling off getting the house ready and the MANY interim plan changes, I’ll tell you that we found ourselves at DCA (Washington National Airport – sorry, can’t get used to spelling out airport names) at about 9:30PM on Tuesday night awaiting a flight to Boston now delayed until 12:30AM.  And here I should clarify this process briefly – when flying standby the game is to figure out which flights or combinations thereof can get you to or near your destination, and then to check the “loads” (seats available) on these flights, through various means, so that you can determine whether you’ll actually get a seat.  Flying on your own airline is preferable because it’s free, but other airlines are possibilities too, just less desirable because there’s a fee involved and the means for load-checking aren’t as accurate.  Where it gets hopelessly complex is during periods of cancellations, because all those displaced passengers are re-booking in real time and they all have priority over you.  So a wide open flight can become a fully booked flight within minutes, not to mention the fact that everything gets delayed, so you have to start looking at whether connections will work, and then on top of that you start getting crew availability problems.  Anyway, back to our now-after-midnight hop to Boston.  After deicing the freezing drizzle and ice pellets from our wings and braving the bumpy ride, we pulled into Boston at just shy of 2AM and made our way through the empty airport toward our hotel van, armed with the newfound knowledge that the next day’s flight to LA that we had been banking on had filled up with revenue customers somewhere between 11 and midnight.  So that was now off the table.

Woodsprite had a meltdown in the airport, and I so wish we had pictures, because it was so her…  she was dead tired (of course) and dragging her roll-aboard through the airport like the rest of us, and she just flippin’ lost it.  Just started crying angrily and inconsolably, but kept dragging the rollaboard through the airport.  It wasn’t a minor meltdown by any stretch of the imagination but it was so civilized how she waved everyone off and just kept doing what she was doing.  “I’m 6 years old and it’s 2AM for Pete’s sake, just get away from me and let me cry my head off while I do this bag drag, will you??”

Plans L though Y or so died quick deaths between our DCA time and my extra hour awake in the hotel by the light of my laptop.  But plan Zulu prevailed, and at 10:36AM we jumped (still flying standby, miraculously) onto an American Airlines flight to LA.  How this flight had open seats I have no idea.  It even surprised the gate agent, who advised us, prior to taking a look at our flight’s status, that we shouldn’t bother our checking bags because “everything’s full today.”  Everything except this flight I guess!  We even sat together.  Victory!!

Here’s our (very very) rough plan for the last phase of our journey. 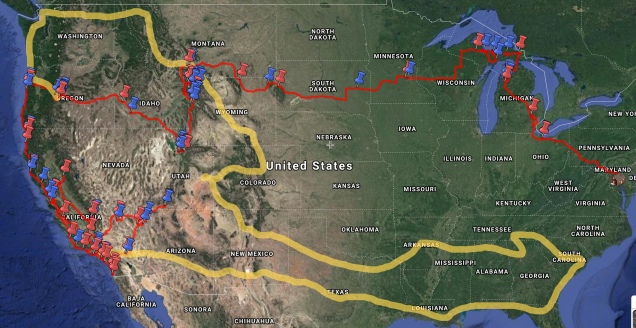 See you from the road.