Departing Phoenix we tried a new version of the dawn patrol, which worked quite well.  Essentially we front-loaded all the work the night before so that Go Time mostly just consisted of waking to my alarm, making a cup of coffee (and taking a quick shower) to get me coherent, and rolling into the pre-dawn.  We had covered quite a bit of ground before things reached their normal activity level in Davista.

While eastern Arizona was quite beautiful, particularly the parts that traversed the mountains, southern New Mexico was less so.  I kept searching for something to find interesting, but didn’t have much success until Las Cruces, where the Rio Grande valley greens things up a bit and a sharp ridge of mountains behind it teases at some more intriguing surroundings.  But alas, the Rio Grande was where we turned south toward El Paso, so we never quite reached those mountains.

I’ve been to northern New Mexico in the higher elevations and loved it, so this stretch of road did nothing to dampen my enthusiasm for our planned return to the state’s mountains later this Spring.

Bypassing El Paso to the north, we joined a two-lane road that led us through barren desert toward Guadalupe Mountains National Park, still in Texas but just, and our jump-off point to Carlsbad Caverns.  I had initially reserved another campsite in New Mexico from which to drive to and explore the caverns, but the more I looked at it, the higher the sketchiness factor appeared.  Comments from the “reviews” section of a website I use to scout campgrounds contained phrases like “not too much trash” and “just far enough from the road so they can’t see you” as well as the somewhat more ominous “felt a little off…”  Nahhhhh.  Out here I would’ve been happy to do a Wal-Mart parking lot, but there were neither Wal-Marts nor parking lots, so expanding our search into TX and finding a national park I’d previously never heard of with a campground that took RVs was a no-brainer, even if it was first-come-first-served.

I just mentioned that I had never heard of Guadalupe Mountains National Park, right?  Yeah, it’s tiny.  Basically a nubbin of a short mountain range in southern New Mexico (the same one in which Carlsbad Caverns is found) pokes into Texas at its southern end, and in doing so creates the highest point in the state at 8,749’.  There’s a small visitors’ center and a campground, which was really just a three-row parking lot with a bathroom, at least the RV side of it.  The tent side looked a little more scenic, but was equally diminutive.  The sole trailhead sat 20 feet from our parking spot campsite, and from there it appeared that you could do some solid hiking.  I will give it that.  Yet… Tacco and I found ourselves speculating on what sort of horse trading might have been involved in the establishment of this place as a national park.  Maybe we’d have felt differently had we done some of the hikes, or if we were from Texas and felt like we deserved to have at least a couple national parks since Utah and California get to have so many.  Kidding!  Mostly…

Regardless of its relative modesty, it was reasonably pleasant and safe, the girls knocked out another Junior Ranger program, and Keeper, who has of late developed an interest in cooking shows, fixed us an outstanding dinner.  A friend of mine once told me she loved guys from Louisiana because “they call you ‘darling’ and they’re all great cooks.”  Keeper will almost certainly never be from Louisiana, and doesn’t have the chops yet to call anyone “darling” (which will probably suit him well even when he does have the chops), but he’s way ahead of the curve on the cooking part!

The next day was our Carlsbad Caverns day, and was something I had been quietly looking forward to.  The idea of a no kidding cavern with crazy limestone formations and underground pools and stalactites and stalagmites all up in your face is something I have always been fascinated by, yet so far I have managed never to see one in person.

The caverns have a natural opening of course, out of which tens of thousands of bats swarm each dusk on their search for insect meals.  We weren’t there at the right time to see them unfortunately, but learning this factoid answered my “how did they find this cavern in the middle of nowhere?” question.

Most visitors, however, descend into the 800’ deep caverns via elevator from the visitors’ center, which seemed like a cop out to me.  I was actually pleased to discover that the elevators were out of service during our visit, taking this option off the table.

Beginning a hike with a steep descent, negotiated via switchbacks, was a first for me as well (clearly I’ve never hiked the Grand Canyon either).  I was surprised, though I shouldn’t have been, at how quickly the light was gone and replaced by the extensive artificial lighting network the park service had installed.  It was only a hundred or two feet down where we read that at this depth, without the artificial light there’s nothing for your eyes to even adjust to.  Just pure black. 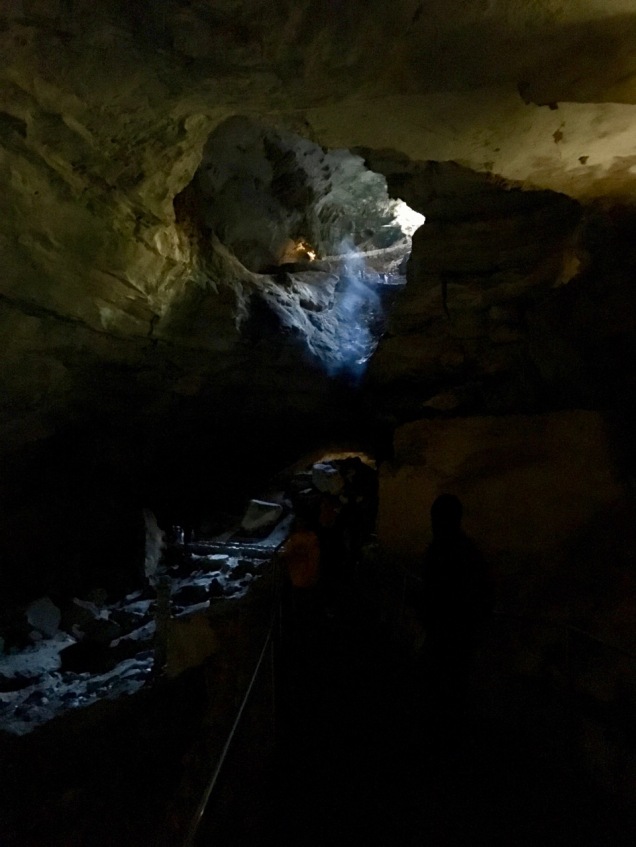 Noteworthy also was the condition of what appeared to be a vast majority of the visitors climbing back out of the cavern.  Bulging eyes, stopping every hundred feet or so to gasp for breath, pale and sweat-covered… I have to admit it made me wonder whether 800 feet was a much greater vertical distance than I was remembering it to be, or whether cave air robs you of your oxygen or maybe just your mojo in some mysterious way.  Not that any of these people appeared to be endurance athletes, in fact far from it in most cases, but their apparent exhaustion certainly seemed excessive.  Was this a more taxing hike than it appeared?  Would I be carrying out the kids on my back?  I filed these thoughts away for later.

The sheer size and labyrinthine nature of the complex of caverns overwhelmed me as we continued to descend.  I absolutely can not imagine exploring something like this armed with only a headlamp and a rope.  Yes, I understand that they have a system for ensuring they don’t get lost, but that would not be remotely enough for me.  It’s easy to forget, when you’re wandering around gawking at everything, that this place is now lit up by thousands of lights (and it’s still only very dimly lit) and that you’re walking on paved trails with handrails.  Safety rope or not, it would be terribly disorienting, and with a constant nagging fear (for me at least) of some sort of malfunction causing me to be enveloped by darkness and hopelessly lost.  Evidently I am not a closet spelunker. 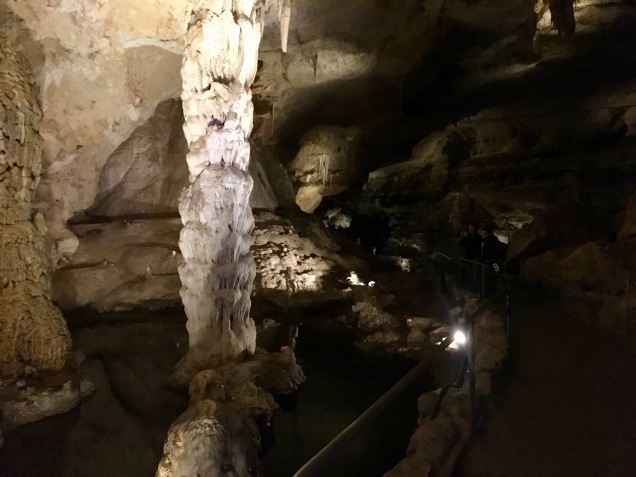 All that said, the caverns were stunning. 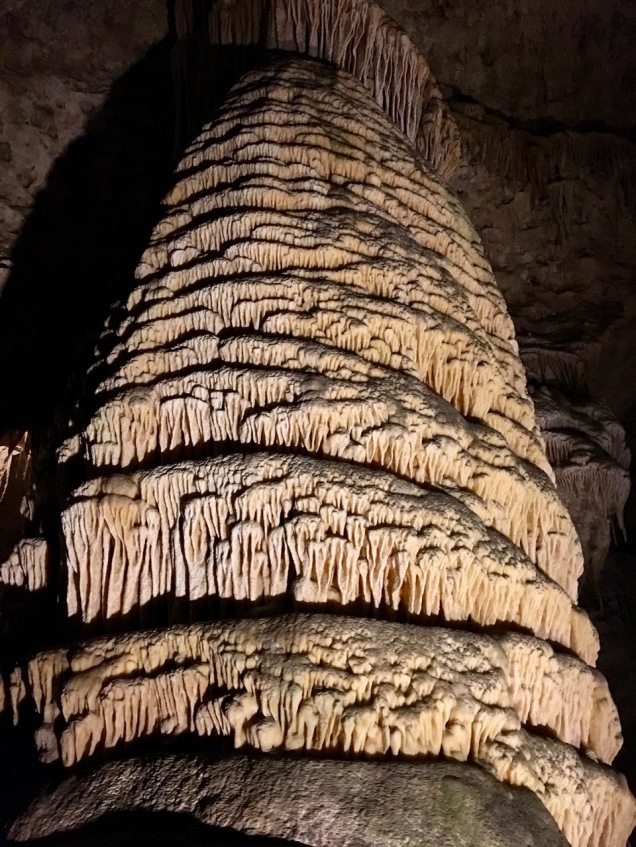 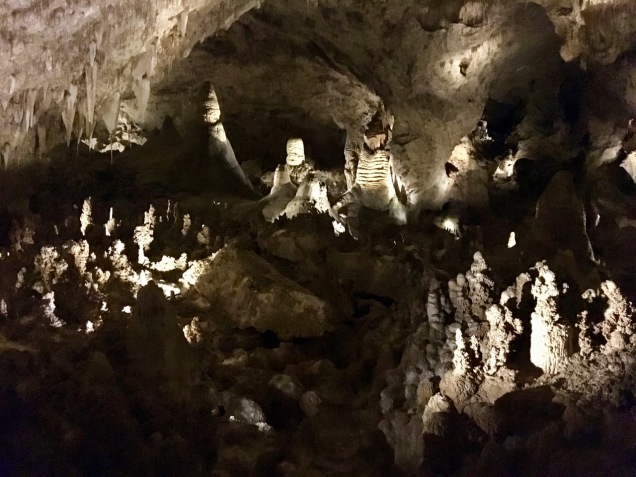 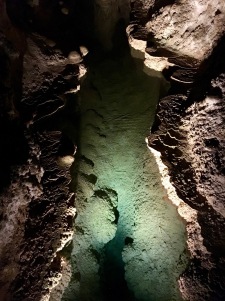 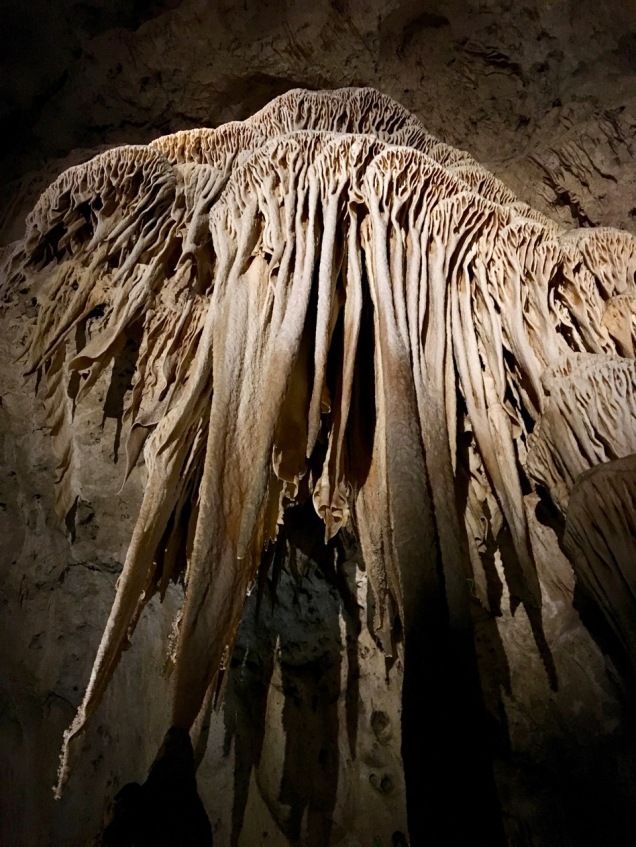 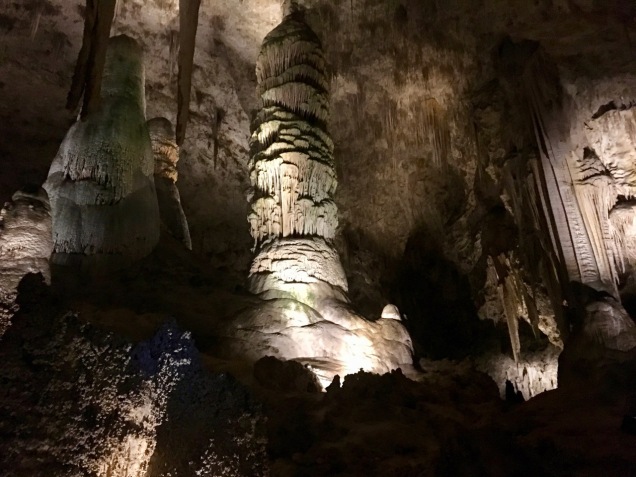 We traversed the entire loop trail and stopped near the “rock of ages” to complete Junior Ranger activities. 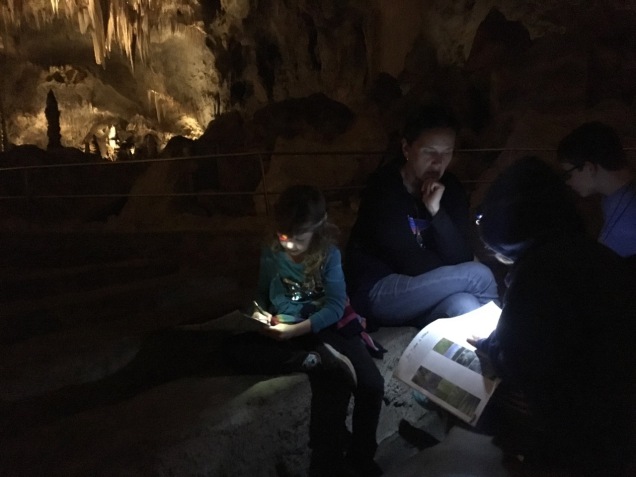 Prior to our own ascent I recalled the sight of the sweaty zombies emerging during our descent and decided to attempt to get ahead of the kids’ inevitable complaints about the climb.  My exhortations about their hiking skills and the fact that they had easily conquered several more difficult hikes may have had some effect, but I think it was my turning it into a “who can complain the least” game that truly pushed them over the edge.  Gamification wins!  They killed it.  As it turned out, 800 vertical feet is just about what I remembered 800 vertical feet to be, and wasn’t particularly tricky.  Keeper and Firebolt blazed the trail and reached the top a solid five minutes before the rest of us, with Keeper declaring that he felt like returning to the bottom and coming back up again, just because.  Even Woodsprite managed not to complain, and we hardly broke a sweat.  I was proud of my family.  I did, however, find myself musing, at about the 2/3-to-the-top point, on the general physical condition of the average American.

After a bit of messing around back in the visitor’s center,

we made our way back to Davista at Guadalupe Mountains NP and set up for another dawn patrol after an early night.  It would be another long drive through Texas to Austin in the morning, and despite our short stay in the area, we felt confident we had seen everything we ought to have.  My post title was a touch snarky, but in truth I’m glad we made this visit and got to dip our toes into this region of the country.  It’s entirely unique and fits well into the whole, even if it contains very little that screams “look at me!!”  It helped us all, I think, to understand a bit better how vast the landscape is once you get outside the cities.