And here we reach the southernmost point in our journey.

Our plans have morphed too many times to keep track, but one of the most major changes was our decision to return to Maryland for the Winter and leave Davista in California, rather than heading deep into Florida for the Winter.  We had originally toyed with getting all the way to Key West before turning around and possibly parking the rig in South Florida while we went elsewhere for a while, then returning to make our way slowly up Florida’s Atlantic coast.  Losing the Winter and staying west caused us to essentially chop Florida from our plans altogether (though we figured we would still hit Pensacola).

But then my cousin and aunt/uncle made contact and asked if we would see them in Tampa, and we thought “why on Earth would we not do this?”  So fortunately we cast aside our feeling of “gotta get back moving west!” and did.

My cousin – she needs a callsign… I’m going to go with ‘FunStep’ – is my only first cousin on my Dad’s side, and we’ve lived far from each other for most of our lives, which is a shame.  We were lucky enough to attend her and her husband’s wedding in Fort Lauderdale back in 2012, and they’ve since moved a few times and had two gorgeous, blond kids, who my kids hadn’t had the opportunity to meet yet.  Tacco asked me about the age difference between FunStep and I, and I instinctively answered “oh, just a couple years.”  She looked at me oddly, and I simultaneously realized I was way off.  “Wait, I remember her birth, and I’m pretty sure I was in High School.  That’s not ‘a few years,’ is it…”  “Ummm, no.  It’s not.”

I assume it’s not just me who sees people far younger than I and mentally pegs us as the same age.  Or at least “pretty much” the same age.  Peers at least.  Definitely not with me as the old guy though.  And then I see a mirror.  Or a picture.  Yikes.  Oh yeah, that’s right, I’m pushing the upper end of middle aged, and you’re in your twenties or early thirties.  Oops.  This phenomenon has only gotten more exaggerated as the years pass.

Anyway, I’ve got about 15 years on FunStep.  Her parents, my aunt and uncle, did figure into my childhood pretty significantly as they lived fairly near us in Southern California.  He’s my Dad’s only brother, and inherited 100% (maybe more?) of my grandmother’s fun-loving and magnetic personality.  He was always the one who made the family gatherings more fun and bought me cool stuff for Christmas.  Tacco commented that FunStep is the perfect mix of her parents in that she mixes her mom’s liveliness and beauty with her dad’s impish sense of humor and play. 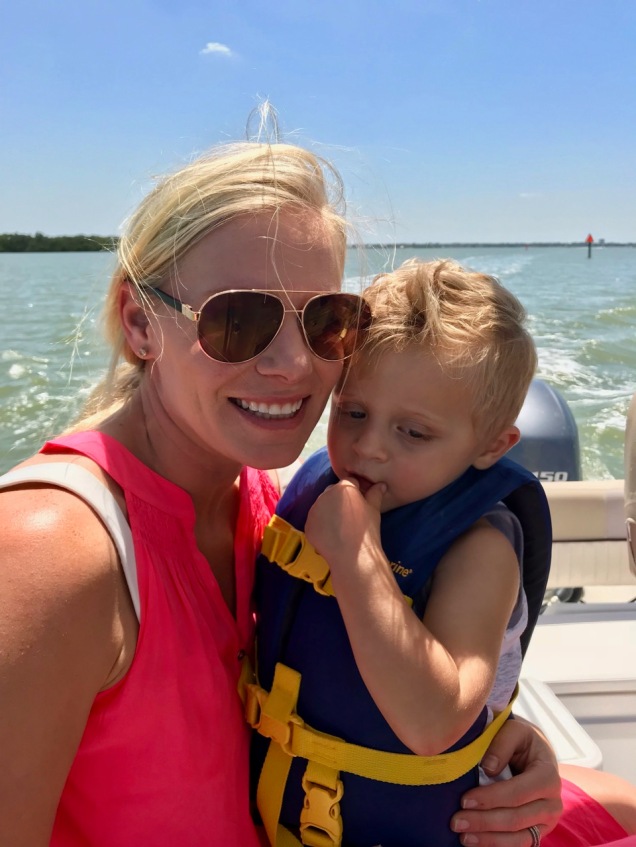 I hadn’t yet had the opportunity to get to know her husband, either, and I always enjoy catching up with my aunt and uncle, who by the way never seem to age. Wait, am I the only one aging around here??

Anyway, as a bonus, my parents decided to take the opportunity to fly out to Tampa and join in the festivities.  Excellent!

The drive from Miramar Beach was a long one, and mostly inland.  I would have been tempted to take the coastal route down to Tampa if that existed; unfortunately beaches on the Gulf side give way to swampland not too far east of where we were, and the coast doesn’t really become “beachy” again until just a bit north of Tampa.  There’s no real coast to drive down!  What there are, and I wish we had had a bit more time to explore them, are lots of rivers and crystal clear spring-fed pools.  Alas though, we had a campsite to get to, after a late start no less, and I had a work trip to fly the day after we arrived.  I still find it almost unfathomable that we often feel rushed on this year-long trip, yet we do.  If we ever do it again (just Tacco and I this time!), we’ll take two or three years… 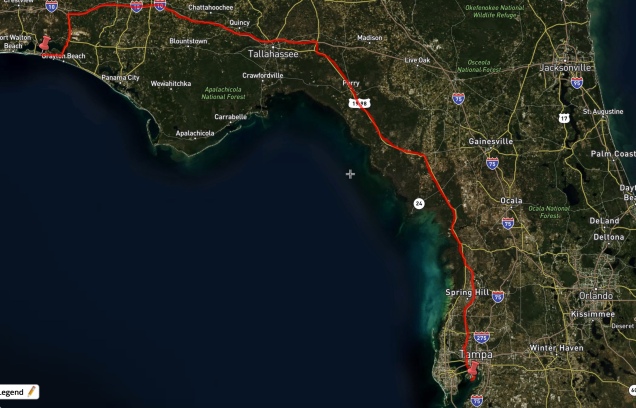 Tampa is huge, and not particularly flush with RV campgrounds, but fortunately MacDill Air Force Base is near where my cousins live and sports a massive “Family Camp” on its southern flank.  When I called to reserve a spot I was told that we would just be missing their high season, and as such would have pretty much the run of the place.  Evidently these are prime overwintering grounds for military retirees.

The gentleman I talked to was correct, by the way.  We pulled in just at dusk and had at least a hundred spots from which to choose.  We took the one nearest the beach, made some dinner, and went to sleep.

I would like to say that the beach there gave the one we had just departed from a run for its money, but, well… It’s probably not a fair comparison from the get-go, as it’s deep into Tampa Bay rather than on the actual oceanfront.  But it was also just a little unpleasant within those constraints.  When we walked over to take a look, we were first confronted with an educational sign that described the importance of leaving the rotting algae and bits of seaweed in place, as they served as a vital habitat for the various insects and crawling things.  Ah.  So that explains the smell.  It wasn’t that bad overall… but it wasn’t really nice either.  The sand’s consistency was closer to dirt than to our last few beaches’ sugar, and the water looked a bit muddy and seaweedy.  Plus lots of little crabs near the waterfront.  Like enough to freak Tacco out a little.  It’s not often you see that many of them skittering away into their burrows when you approach.  I had hoped for another day of beach play there with FunStep and family, but after our morning walk we opted not to suggest it to her.

Also – it turns out it was love bug season!  I had forgotten about these entirely from my time as a Florida resident, but definitely noticed more than the normal amount of bug splatter on Davista’s front (and my windshield).  Once we stopped, I saw them everywhere.  Basically they’re these little black bugs that resemble fireflies without the glowing part, and they fly around in mating pairs, attached at the bug-genitalia.  Not only are they prolific, but they’re far less maneuverable than your normal run-of-the-mill insect due to their chosen flight configuration.

They.  Get.  Everywhere.  And what I had forgotten was that they only come out for a few weeks in the Spring (possibly Fall too) to do their thing, so our timing was impeccable.  But that’s not all!  I was informed by my uncle, who worked at an auto auction for a while, that their innards are acidic and will eat through your car’s clear coat if you don’t clean them off.  So I spent a good 45 minutes wiping and scraping and scrubbing lovebug remains from Davista’s front on one of our first days there, with only marginal success.  It fascinated me, while I was cleaning, to watch new mating pairs land on top of the field of body parts and semi-liquefied remains of their friends to keep on mating.  Seemed kinda hard core.  Goth even.

Tampa is quite a large city, and has an interesting Cuban section as well as a good bit of history associated with it.  I had hoped to be able to do a bit of exploring, but work was of course there ready to thwart my plans again.  That whole paycheck thing…  So I left the family behind to do their own exploring / visiting, and returned to join them a few days later.

They had already spent some time with my family in my absence, but we planned a few more get-togethers upon my return, one of which involved a rented boat, some cruising, the beach, and a yacht club, which FunStep and family had recently joined after their relatively recent move to the area.  We noted that their social strategy upon moving was quite different than ours had been in Maryland, in that they made a concerted effort to “put themselves out there” and develop a friends network.  Tacco is certainly the more social of the two of us, and did do quite a bit of networking in Annapolis, but I always felt like I had one foot out the door during our time there, and never really made the effort to connect.  I like their strategy better, I realized, and made a mental note to remember this when we eventually settle.

One of my uncle’s many talents, aside from cooking in general, is the creation of simple, yet ridiculously tasty Italian appetizer platters.  No matter where he is, he seems to be able to sniff out the best Italian deli almost immediately, and he knows exactly what to buy in order to craft his tasty wares.  Many times I’ve told myself that I needed to pay better attention when he pulls one of these out, and this time, after asking the appropriate questions, I think I might have gotten it nailed – mine have never been as good as his in the past.  Though what I should have done, I now realize, was take a picture… ah well.

The boat / yacht club day was fantastic, and exactly the type of family visit you never get enough of.  We got to see Tampa from the water, the kid-cousins got better acquainted, we did some stand-up paddle boarding, and just socialized.  Such a great day. 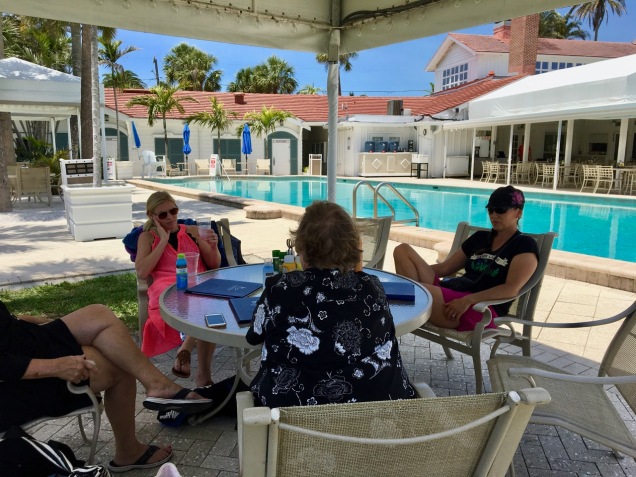 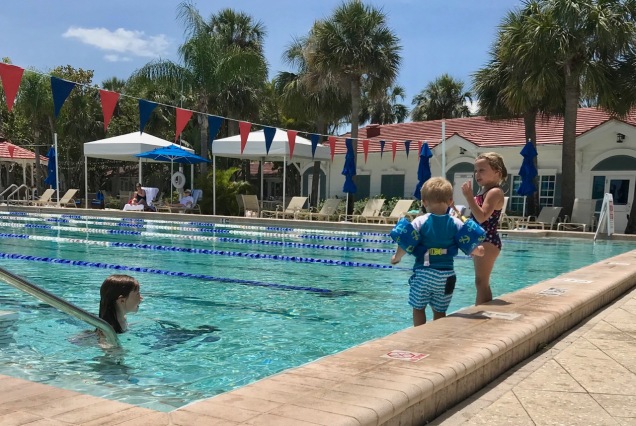 And then we converged on an old-school-ish Florida seafood place on the beach and tied things up nicely with some excellent food.  I realized at some point during the meal that I had eaten more oysters in the past couple weeks than I had eaten in at least the previous five or maybe even ten years.  As a huge oyster fan, that’s a travesty.  But to be fair, west coast oysters, which I do prefer taste-wise, have gotten preposterously expensive.  Long gone are the days of shooting up to the oyster farm near our house and snagging a bag of 5 dozen Kumamotos for $30.  *sniff*  The oysters are still reasonable in the Southeast, though, and I remembered how much I like them.  Chalk up another one for the South!

Overall this has been a fitting inflection point for us as we turn north (and soon west).  It was great to visit loved ones and remember that this is part of why we chose to do this trip, and it felt like it was time to begin our return to our chosen coast.

But we’re not quite done with the South yet – several never-visited cities and at least one National Park still to come this Spring.  Looking forward to it!  Now, would someone please buy our house?