She was lookin’ for a soul to…

Nah, gonna punt on that one, there’s nothing devilish about Davista.  Yet.

Unfortunately for me, Atlanta was one of those destinations that I didn’t see much of, due to its easily commutable airport which allowed me to fly a relatively long trip.  I need to remind myself on occasion, when I’m becoming frustrated by the fact that I miss a significant chunk of this adventure due to needing to work, that my having this job is basically THE thing that has allowed us even to consider traveling in the first place.  Short of extreme telecommuting or being independently wealthy, it’s difficult to imagine a profession more suited to this lifestyle, where I’m able to “go to work” from pretty much anywhere, as long as there is an airport with some scheduled service nearby.  So yeah, I missed most of Atlanta, and in fact never made it into the city proper (save for the airport, which is its own city in a way).

The drive down from Great Smoky Mountain National Park was another stunner though.  It passes through Nantahala Forest, which is essentially the far western tip of North Carolina.  Our road followed the Nantahala River, which cuts a fairly deep gorge through the hills, and is a white water rafting paradise.  I would return in a heartbeat.  In fact, despite my fairly lukewarm assessment of Great Smoky Mountain National Park in my last post, I’m realizing that this entire area of the country – by which I mean basically the southern Appalachians, to include parts of Tennessee, Georgia, and North Carolina – is pretty amazing and worth more exploration.

Atlanta is not the best place to park a motor home, at least not within the city limits.  We did find a military base in Marietta, northwest of the city, but they were full.  And there really wasn’t much of anything nearer to downtown, at least not where I felt comfortable leaving my family for almost a week.  Which led us to Lake Allatoona up in the northwest, about 45 minutes out of town.

This is another fairly unique feature of that part of the country – massive lakes (reservoirs, actually) which are quite narrow, but long and winding, extending thousands of watery fingers into the little valleys.  There are dozens of these lakes (probably more like hundreds), and the houseboating opportunities are endless.  Pontoon boats, too.  You don’t really see pontoon boats in the West, but out there they are the water conveyance of choice, and for good reason.

Our Lake Allatoona campsite was lakeside (and incidentally, we had at least a dozen campgrounds from which to choose up there), and we decided that a day on the lake in a rental pontoon boat would be the best use of our time, at least for a day. 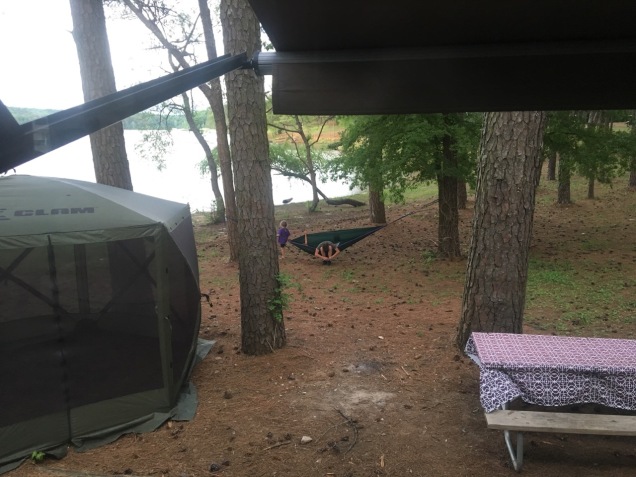 Great call, despite the weather only marginally cooperating.  Hot and sticky with thunderstorms is the summer pattern in the South, and it’s just beginning to take hold.  But the rain managed to hold off for most of the day, and frequent jumps into the comfortably cool water took the edge off of any heat.  I had never previously imagined being able to tow a tube with a pontoon boat, but I was assured by the folks at the marina that it’s SOP.   I was also told that the boat would do 50 mph over the water, even towing a tuber.  That claim I regarded with deep skepticism, but nodded and smiled anyway.  It turned out that by “50” she meant “about 15-20.”  Which was a bit slow for the really fun kind of tubing where you bounce off waves and flop around like a rag doll, but probably just about right for our kids, or at least the younger ones.  Actually what she (the marina worker) did was confuse RPMs for MPH, which I clarified with her afterwards.  All good, we had a blast and got to explore a gorgeous piece of Georgia from the water.

Check out this guy… 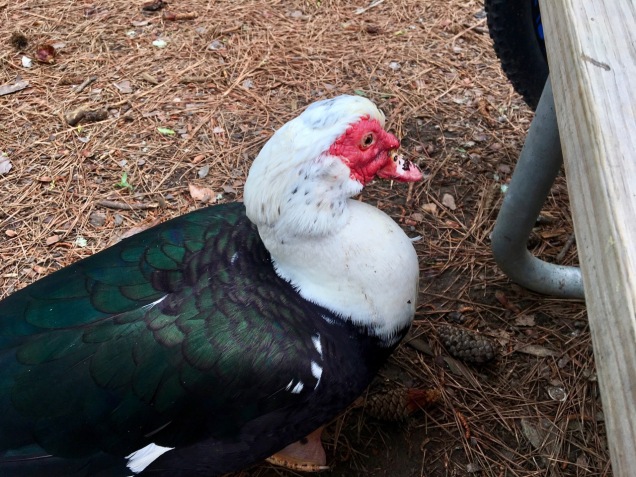 He was one of quite a few unique ducks/ducklings/geese/goslings who inhabited our campground.  I guess technically it’s theirs, and we’re the interlopers.  Anyway, he liked to hang out underneath Davista and then waddle over near my feet when I would sit down.  I wasn’t sure why until I brought my breakfast bar and coffee with me outside to sit and enjoy the morning with.  Seeing what he had evidently been waiting for, he made an aggressive play for the breakfast bar, which I was only able to narrowly keep out of his beak.  He almost ended up in my lap in his attempt to take what he clearly thought was his rightful breakfast.

The other highlight, and really my only experience in Georgia, was a visit with some old squadron friends whom we hadn’t seen since we left the squadron back in 1999 (2000 for TACCO).  They live in a lovely suburb and have two brilliant sons, one of whom is nearing college application time and likely Ivy League or Stanford-bound.  He (my squadron bud) and I, when we first met, had squadron jobs that required us to spend far too much time in a windowless, secure, vault-like room with not much to do other than verbally spar, an undertaking in which he excelled.  We would argue politics (squadron, national, and world) and fiscal policy, quote movies, but mostly we would just talk smack.  He was both better at it than I was and more inclined to just sit and chat, whereas I tended to be engrossed in studying for my progress through the squadron’s plane commander syllabus.  It was fun, though, and I wish I would’ve engaged more, because we had quite a few non-obvious things in common and could’ve become much closer friends through the process, rather than the kind who have a great mutual respect but don’t see each other for 19 years.  I think this is something we both recognize, and we have found it interesting to watch, aided by the tangential contact of social media, our worldviews converge as we grow older.  We’ve become very like-minded and share a somewhat unique combination of introversion and extroversion.  Though being an avid runner, mountain biker, and vegan, he’s in far better physical shape than I, despite having a few years on me.

It really is a shame we can’t hang out more.

Despite his dietary habits, he smoked an absolutely mouthwatering (and enormous) filet of salmon, which he informed us had been termed “My Magic Fish” for our family dinner.  We even had leftovers, which we ate for a few days.  The kids played together in a nearby park and the four of us got to spend a bit of time catching up and reminiscing.  It was over far too quickly, as those types of things always are, but having almost missed Atlanta altogether, I was incredibly grateful that we carved out the time to see them, and hope we’re able to do so again, maybe out West.  We have some mountain biking to do!

From here we head west in earnest, and there are several options on the table for how to do so.  Essentially we need to get to Colorado in time for my next trip, and can take several routes to get there, all of which have much to offer.  We’ve been debating a southern route that takes us through Hot Springs, AR.  And then there’s a northern route that involves a stop in St. Louis to see the Gateway Arch.  But the front runner has us more or less splitting the difference and heading to visit more old squadron friends in Cuba, Missouri, at the northern edge of the Ozarks, which is an area of the country I’ve never seen but would very much like to.  Unfortunately that will require blowing through Tennessee, which was not my initial intent – much to see there as well.  But we have to pick and choose.

My sciatica is becoming more of a factor as well.  Driving more than a few hours is getting excruciating, and only laying down affords me relief.  Ibuprofen keeps it palatable if I know I’ll need to sit, but I really don’t like to ride painkillers if I can avoid it.  Flying (for work) is a concern as well, but I found on my last trip that I could keep it at bay by moving around more and standing up on occasion, options that driving Davista doesn’t give me.  My hope is that I’ll be able to get ahead of it before long – we still have quite a bit of road ahead of us.