There are gators.  On walk about.  In Houston.  I thought gators were conscious of not crossing state lions with illegal porpoises (that’s punch line of a terrible joke I once heard, I’ll spare you…) and mindfully kept to Florida.  Not so. Our accommodations in Houston boasted one benefit, and pulling the kayaks out to paddle about the non-swimming hole (aka “the lake” as in the Willow Lake RV Resort) was not it.  I took a stroll around the lake and learned it was not a place to kayak or swim.

What was befuddling, was the use of the additional signage about a quarter mile down:

I though maybe posting a “Beware of Gators – Please do not feed the wildlife” sign would have been sufficient because the unwritten follow on “with yourself” immediately came to mind. But perhaps the lawyers were unwilling to allow Darwinism to potentially streamline our gene pool, lest any hypothetical survivors of any alleged gator attacks try to sue.

In preparation for our stop at the Houston Space Center, Flight watched Apollo 13 with the kids while I was in DC for my Navy Reserve work.  As we rolled into the RV resort, Firebolt sidled up to the driver’s seat and offered up, “Houston, we have a problem.  We are out of toilet paper.”  I turned around to ask, “Seriously?” when she giggled and said, “Just kidding! I just wanted to say ‘Houston, we have a problem.’”

That kid is as witty as they come.  Meanwhile, her jesting brought about immediate flashbacks to last August when liberal use of that precious resource (specifically created for rapid decomposition in marine and RV usage) had temporarily clogged our black water tank and we had to creatively flush it using a dump station hose fed through the window above Woodsprite’s bed and into the open commode to force out the lingering clumps of yet-to-deteriorate TP.  Fortunately, we were able to unclog the mass of tissue collecting in the tank, which necessitated implementing the general* rule “No more than six squares per visit.  Total.”  (*Okay, okay, wipe until you’re clean, but please don’t us half a roll in the process as you might break our house…)

I had known our RV-specific TP supply was running low and already briefed the kids that we were on ration status until we could procure more, but didn’t think we were yet at General Quarters.  I have come to learn that lack of TP is nearly as mission critical as a free-flowing black water tank.  I wonder how they handle that at the International Space Station.  Do they use Charmin?  Never mind, I saw The Martian…

Our only full day in Houston was spent paying homage to NASA’s efforts, which was the singular benefit to staying here as it was nearby:

Although entry to the museum is free, the thing to do is the 90-minute tram tour that has three stops across the NASA Houston complex and that thing, sadly, is not free, not even for Navy Space Cadre personnel (Flight suggested it’s because I haven’t yet learned the secret handshake).

Before we jumped on the sightseeing tram, we spent some time touring the museum.  We practiced our docking skills at the International Space Station. 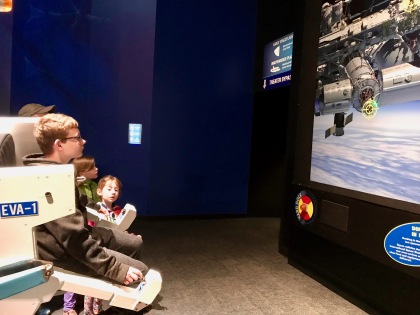 We had a physics discussion and practiced weightlifting on different planets of varying gravitational pull. 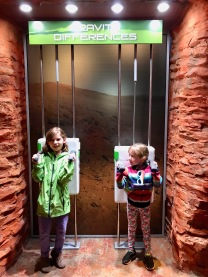 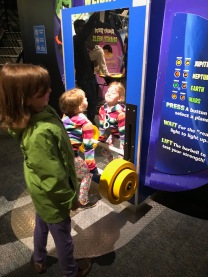 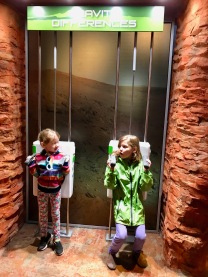 We saw where they faked the moon landing.

Kidding! Everyone knows they used a sound stage in Area 51.

We counted our blessings that my Naval Flight Officer path was cut short before entertaining getting into any of these tiny capsules.

Okay, maybe that was only me.

When I saw the below mockup of a space station, all I could think about was how vertigo inducing space travel would be for me and how it would be about two hours sans gravity before I went cray-cray.

I’m happy to know two astronauts, am glad they are excited about what they do, and even more delighted to know my Space Cadre role relegates me to a desk (I think).

Our budding scientist was equally excited (can’t you tell?) to see the elemental breakdown of the moon’s soil composition. 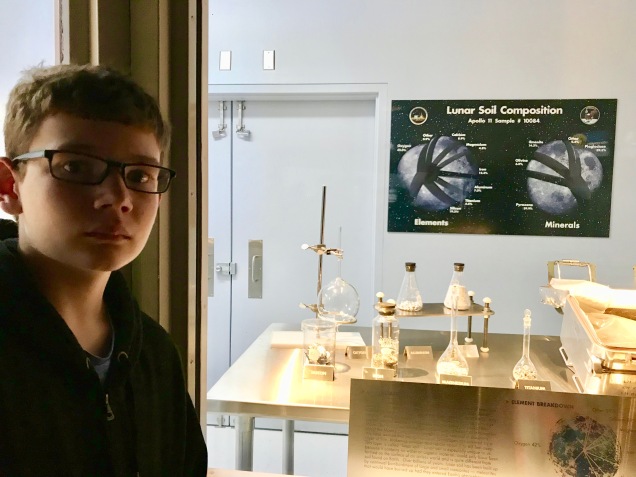 Once we’d canvassed the museum, we made our way to the tram-line and waited through innumerable games of “Cowboys” before we boarded our chariot.

Our first stop was at Mission Control Center.  Firebolt was pretty stoked to see Mission Control, and upon entering immediately observed, “Wait, I’ve seen this before – this was in Apollo 13!”  WoodSprite was less excited about all the stairs and waiting. 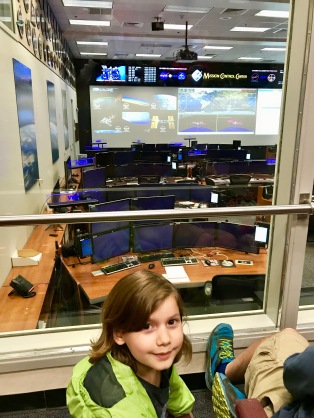 After leaving Mission Control, we were taken to see the astronaut training center full of stationary mock-ups of all sorts of space gear.

Center front was this contraption, which I was pleased to see was named for the mighty hunter, Orion.

The woman who briefed us at Mission Control told us that the Orion was bound for Mars in a few decades and that would be piloted by astronauts who are now six to eight years old (that got our girls’ attention!), whereas the future Mission Commander is probably now 12. Keeper perked up at that tidbit as well. Always keen to support STEM activities, I was delighted to see that NASA was hosting a FIRST Robotics competition at the other end of the training facility.

The last stop on the tour was to see the rocket hangar. 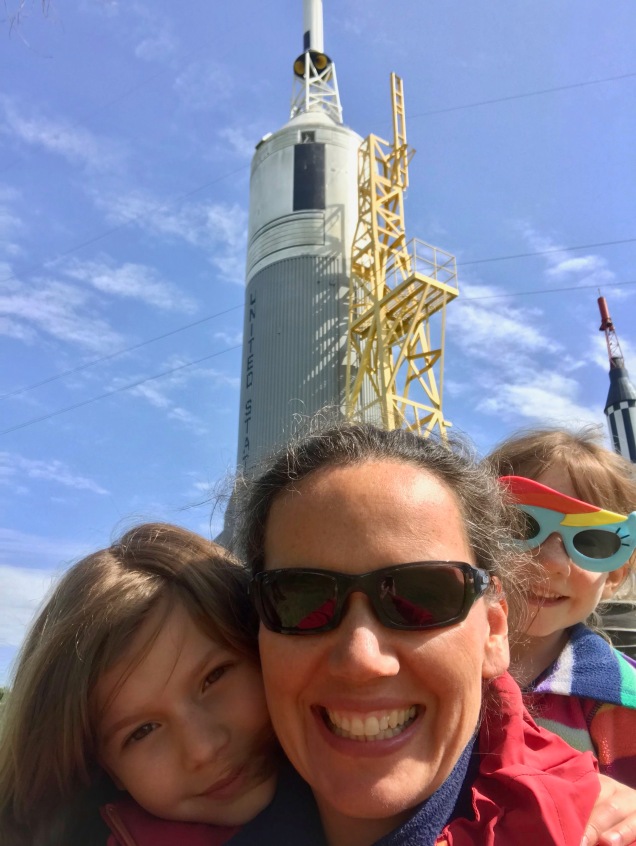 It’s tricky to truly understand the magnitude of these beasts until one actually sees them, and especially mind-blowing to note how small the actual vessels are compared to the engines and fuel tanks that serve to propel them into space.  Firebolt posed with one like the five engines that were used in stage one to get SATURN V into orbit.

Each engine fires for only 2.5 minutes before burning through all the accompanying fuel and separates from the main pod.  !!!

To put it in perspective…  These things are ginormous.

Through our time at NASA’s Houston Complex, I was reassured that I am not a good candidate for exploring the final frontier, as neither an astronaut nor a rocket scientist. Once we got to the car, our kids enjoyed sharing a package of Astronaut Ice Cream and I had a few moments to reflect on our brief peek behind the outer space curtain.  Listening to the kids compare taste sensations while savoring their freeze-dried morsels and wonder aloud about potential culinary choices during space travel, I recognized how happy I am to instead cultivate the grass right here.

One thought on “Houston, We Have A Problem…”