While that may sound like the start to an Irish proverb of sorts, the above turn of phrase is attributed to Albert Camus who was decidedly an outside-the-box kind of thinker, a characteristic I always appreciate.  Although our respective time in Algiers was separated by decades and I’m pretty sure he never made it to Bend, I think he was spot on and I believe I have found where I want to live next. Our whole family loved it as well, but Flight’s commute to and from Bend might prove to be an insurmountable challenge.

Permit me to give some background…

We had visited Bend five years ago over the 4th of July. Our brief stay was nothing short of enchanting. We watched people hefting their flotation devices over one shoulder and sporting some local brewery product in the other hand as they purposefully made their way to the center of town to float the river. We rented a quad-cycle for the family to tour through town. Eight-month old WoodSprite was strapped to me in the red Moby Wrap and Keeper and Firebolt were appropriately garbed in red, white, and blue in the front two seats.

As we were cycling around Drake Park, a local pointed to the way we were headed and told us, “Watch out, The Freedom Ride is coming through any minute.” ??? Apparently hundreds of cyclists make a parade through town on Independence Day and, in seeing the front end of the wave approaching us, we promptly did a 180o just before we were overtaken by the surge. Trying our best to look like we belonged, we simply joined in the parade, our kids high fiving townsfolk along the way and yelling, “Happy 4th!”

After our incredible bike ride, we strolled through Drake Park where there was a market of sorts set up. Local artists and crafters were selling their wares. One of the local bagpipe bands was auctioning off a beautiful SUP board with glorious Celtic knot work artistry. And there was Scottish Country Dancing – seriously, did they know I was coming? If memory serves (and it usually doesn’t), we ate an incredible dinner and retired to our place at Mount Bachelor, basking in the enrapturing day.

I was a bit dazed leaving Bend five years ago, not sure really what happened but convinced that the place is magical. Flight and I spent the next stretch of our road trip wondering what it would be like to be in Bend some other time as clearly the city had donned its holiday finery to woo us. Would the charm then hold?

Five years later we (sorry, Flight, I…) know the short answer to that question is yes, unequivocally so.

The long answer is a bit more nuanced, mostly owing to the requisite (and potentially brutal) commute for Flight, yet our time in Bend was no less enchanting this go around. We spent several days exploring some of the bounteous and wide ranging outdoor activities in the area – and we know we didn’t even scratch the surface of all that is offered.

Unfortunately, we stayed well outside of town, actually closer to Sunriver than Bend. The campsite was fine and offered enough space to sprawl out a bit (see Flight’s picture below), hugely welcomed after our stay in the tight KOA construction site campground, but it meant some time in the Suburu for any outings.

Our first day was a hike along the Deschutes. Starting at the Benham West Trailhead, we followed the path the river had carved out, where it was sometimes gently flowing, sometimes intensely rushing.

It was awe-inspiring and I was thrilled to be surrounded again by the pure energy of a real forest, and by that I mean the centuries of massive growth topping out at more than 200 feet (I can’t wait to get to the Redwoods!). The energy of such old growth seems to streamline my own and being surrounded by such trees is so perfectly centering. Oh, to live so near such a sacred space…

Just beginning our hike, the girls asked why we had to go for a hike and repeatedly wanted to know for just how long we’d be hiking. However, about a quarter mile into it, they left off that line of questioning and were eagerly foraging for their own hike souvenirs. Firebolt collected as many sizable Ponderosa pinecones as she could manage, momentarily depositing them on the side of the trail to explore a downed tree. 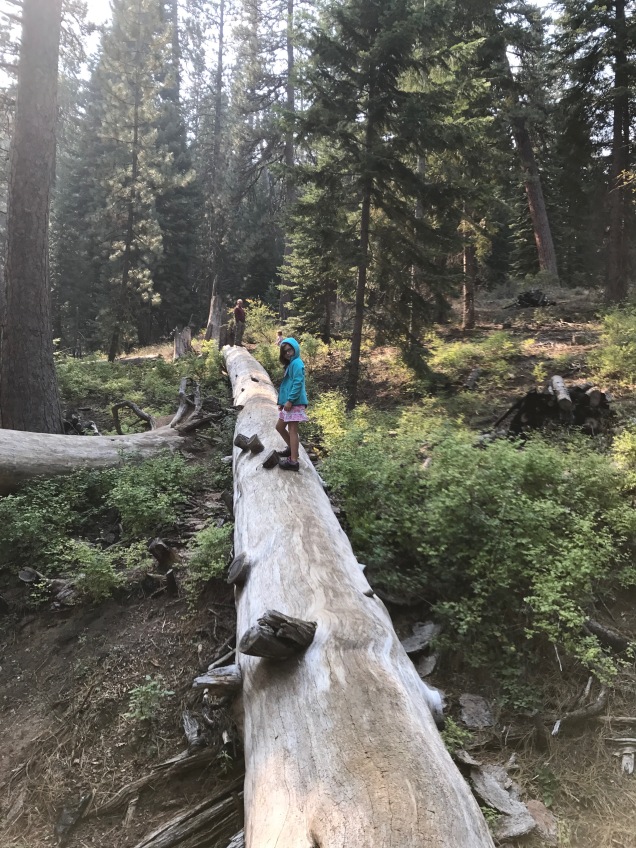 She then deftly retrieved them and surprised me by quickly rapid-fire launching them into the river to assess how fast it was moving. And then she announced she would collect more pinecones to see if the river was moving faster or slower in other places. The whole world is a scientific laboratory when you really think about it and I love that she sees it so as well.

Keeper loved being out and about on the hike, climbing some rocky outcroppings awfully close to the rushing river, which made his mother a little nervous. Flight reassured me that that’s just what boys do and I need to let him do it.  Hoo boy.

The ease by which Keeper has transitioned to thriving outdoors is very welcome to observe, especially considering he’s a far cry from where he was earlier this summer. At one point he called home from Boy Scout Camp to inform me and Flight that nature was attacking him and we should come collect him (which we most certainly did not). Apparently desert mountain climes suit our boy more than tick-infested humidity. Good to know.

We concur.  Is my joy obvious?

WoodSprite was entirely in her element. She found some bark discarded by the pervasive Ponderosa pines and we noted it looked like a computer representation of what bark should look like or maybe thick construction paper cut outs pressed together. Whoa! WoodSprite thought her selected piece would make a perfect umbrella for her miniature princess dolls. 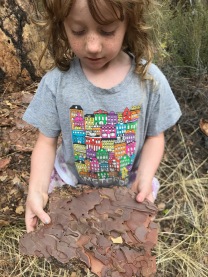 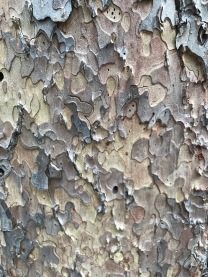 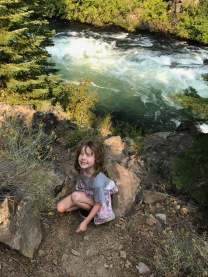 With a nod to Dr. Seuss’ Sleep Book, I admit I didn’t quite, quite understand her vision, but she and Firebolt labored together to make it so when we returned to Davista. Exceptional engineers in the making those two…

After enjoying gourmet burgers (no burger is complete without avocado, bacon, grilled onions, cheddar or blue or goat or feta cheese, maybe some Trader Joe’s sauerkraut, or Pickapeppa sauce or homemade Guinness mustard, or any number of other less conventional condiments – we take burgers very seriously in our family) and fresh corn back at our campsite, I crawled into bed that night feeling as though all was right with the world.

The next day Bend upped the ante. We FINALLY got to float a river and our time on the Deschutes was accompanied by perfect weather and minimal crowds, save a wedding party we made it a point to paddle far enough past to not hear their boisterous renditions of Abba and the like. As he’s posted several times, Flight had been jonesing for this opportunity and I was right there with him. It was glorious to be out on the water and just simply be present while slowly taking in the passing scenery.

Still scarred by our paddle in String Lake, Firebolt announced she was going in the double kayak with Flight. Keeper went solo and I had the pleasure of toting WoodSprite and various princesses, because why wouldn’t you bring them if you have them? 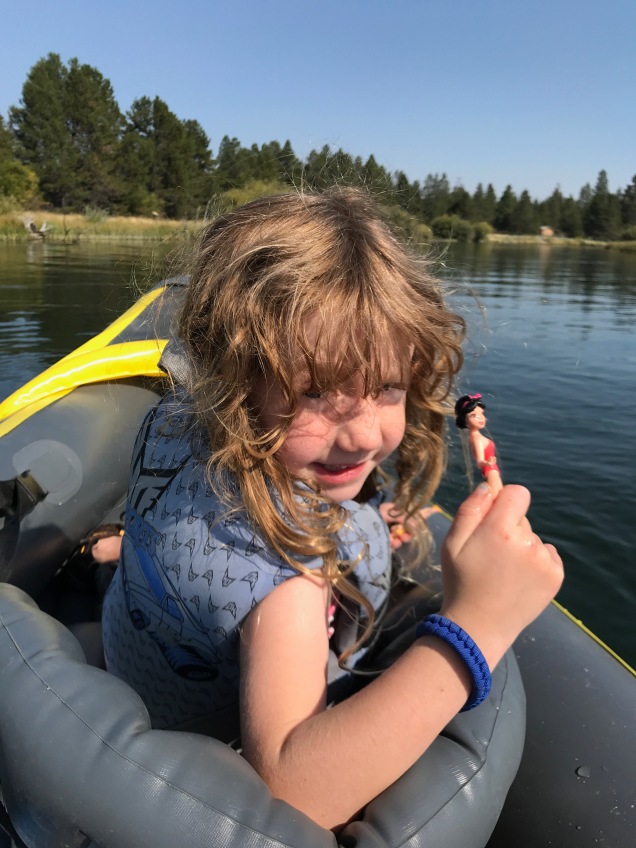 I can’t remember which of the kids initiated the game of tag on the water, but Keeper was the one who became a tad too aggressive in his attempt to tag his sister and ended up capsizing. Doh! After he went in all I heard was a repetitive chorus of, “Cold. Need to get out. Really COLD water. Need. Out…” Ever the good father, Flight braced the Firefly so Keeper could climb back in it without ending up back in the water. Fresh mountain run-off, that’ll wake you up.

Up until we pulled our kayaks out of the river we weren’t exactly sure just how Flight’s retrieval of the car was going to go down as we were batting .000 in such endeavors. Fortunately a fellow who worked for the local community HOA gave him a ride to our put in spot and we were dry and happily bundled back into the Suburu in short order. Our day on the brisk water made for five hungry peeps, which brings me to our first dinner out.

The vast array of Bend’s gustatory enterprises had my inner foodie lamenting we’d only be here a few days. We had to choose very, very wisely with only two days to dine out. No pressure. Crux Fermentation Project is a brewery poised at the top of a hill and won our vote for the first dinner.

As we approached this mecca there was a wide-open field to the right that was lined by several food trucks and dotted with blankets and people enjoying picnic dinners in the retreating sunlight. This looked far too festive a venue for the everyday, so I pointed at this vision and said to Flight, “Shoot, do you think there’s an event tonight? Will we even be able to get in?” “I guess we’ll find out,” and he dropped me off to inquire within.

When asked how long the wait for a table might be, the twenty-something at the register (there’s no host podium at Crux) said, “Actually, it’s open seating, so if you find a table, you can grab it.” “Wow, okay, great. Hey, quick question, what’s going on outside?” “Oh, well, you can order here and eat out there (gesturing to the field), or you can grab anything from any of the food trucks, if you prefer.” “Seriously?” “Yep (big grin), that’s just kinda what we do here.” I love Bend.

From Crux we had a hankering for some gelato and headed downtown to Bonta Natural Artisan Gelato. As we made our way to our destination, we couldn’t help but notice yet another place festively illuminated, this one with streets open only to pedestrian traffic.  To get to our gelato required wending through Bend’s Oktoberfest.  I swear, they must have these celebrations just for us.  As we meandered, we even passed the gelateria’s kiosk, but bypassed it for the real store. Although I was disappointed they didn’t have pumpkin in the proper store (I was drawn to that flavor at the kiosk), Flight reminded me it was still summer and I shouldn’t be enjoying pumpkin flavored anything yet. Fine. Dulce de Leche & Sea Salt it is.  And it was heavenly.

One thought on “Blessed are the hearts that can Bend…”