California’s iconic Highway 1 is, unfortunately, closed in a few places along its most scenic stretch between Monterey and Morro Bay.  Last year’s abundant rains, though sorely needed in the severely drought-stricken West, led to massive landslides along the coast, one of which not only buried Highway 1, but essentially changed the shape of the coastline.  After some deliberation, the powers that be decided not to dig it back out, but to re-build the highway over/around it.  This project, however, won’t be complete until 2018, which is inconvenient for us (and it’s all about us!), but at least forced us to choose our coastal drives and rugged oceanfront campgrounds wisely.

The stretch through Oregon was one such drive.  The other was the drive from Patrick Point to Caspar, near Mendocino.  Much of that stretch pulls away from the ocean at a section of coastline known as the Lost Coast due to its (the coastline’s) almost complete inaccessibility.  Highway 1’s northern end/start, however, is at its intersection with Highway 101 at Leggett, near the southern end of the Lost Coast, and the section of Highway 1 between there and Muir Beach just north of San Francisco runs a close second to its south-of-San Francisco stretch for spectacular coastal views.  Here’s our route.

I’m going to zoom in on that little stretch of Hwy 1 between 101 and the coast.  It’s about 20 miles, give or take a few.  We’ve done quite a bit of driving this trip, and spent the better part of the first month and a half between 6,000’ and 8,000’ in the Rockies, cresting multiple passes and snaking along with river after river through various canyons.  None of it came remotely close to that 20 miles for sheer driving brutality. 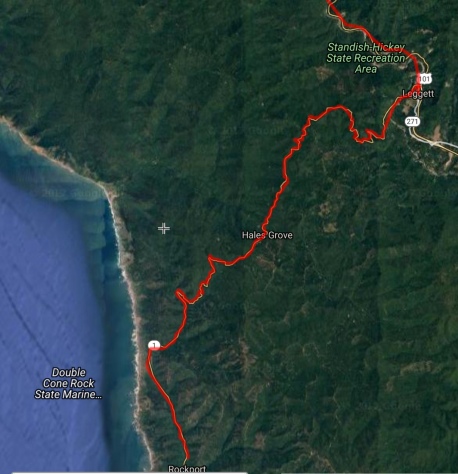 We’re doing quite a bit of talking about geography with the kids on this trip, and one of the things I’ve been trying to get them to notice is the general difference between the East Coast and the West Coast.  Specifically, most of the East Coast is flat for miles inland.  Generally you have a flat, narrow barrier island made of sand, then 10-20 miles of lagoon or marshland.  On the West Coast you have the Coast Range (technically the Coast Ranges) stretching most of the way from CA to WA and plunging directly into the ocean.  Though not especially high in most places (although it does reach over 8,000’ in CA), it’s very rugged.  It makes for great scenery, but also tough driving, particularly if you happen to be, oh, just for example, driving 30+ feet of rickety motorhome near its max weight and towing 15 or so feet of car and bikes behind you.

You’ll often see the yellow signs giving a recommended speed for a portion of road that’s quite a bit lower than the speed limit.  Completely unofficially, I tend to ignore those when I’m in a normal car.  They should not ever be ignored in Davista.  On this particular segment there were multiple recommended 15 mph zones, and even a 10 mph zone for a hairpin curve that I don’t think I could’ve negotiated at 15 or even 13.  Narrow, very steep, and insanely curvy – the entire way.  Near the end, where we were almost at the ocean, I smelled our hot brakes for the first time this trip; I intend it to be the last, as it was extremely uncomfortable.

The next day at Caspar Beach I struck up a conversation with our neighbor, who had clearly been RVing for years and was driving a much smaller rig.  He was headed north (the way we’d come), but wasn’t intending to take Highway 1 across the Coast Range.  When I told him we just had and it was tricky but we managed it just fine, his eyes widened as he looked behind me at Davista / Toad and exclaimed “IN THAT?!?”  Our conversation petered out shortly thereafter, and upon further reflection, it’s possible I should’ve replaced “we managed it just fine” with “we dodged a bullet and are lucky to be here.”

At any rate, disaster successfully averted, we arrived at Caspar Beach in the afternoon, and found it a very cool little beach campground.  As most of the coastline up there is rocky cliff, the vast majority of the beaches are small, hemmed In by rocks, and formed by a river or stream’s meetup with the ocean.  That’s exactly what Caspar is, with the campground on one side of the small road and along the stream, and the beach on the other.  Here’s an aerial shot. 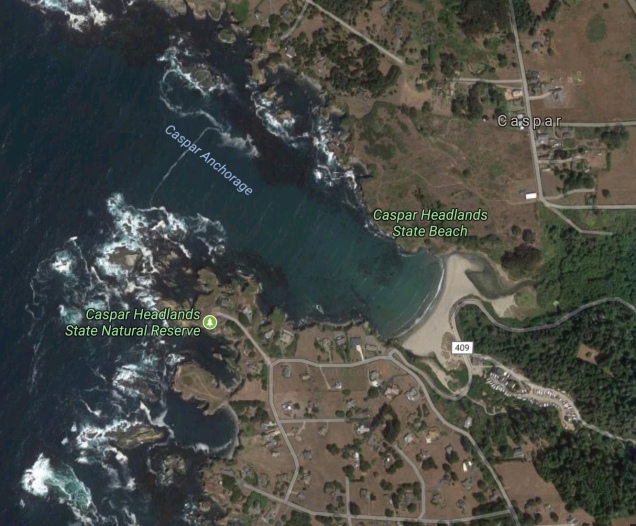 The campground has a little store with kayak, surfboard, and diving gear rentals – evidently all three of those get a lot of play on Caspar Beach, and it’s an especially good spot to dive for abalone.  While there we saw several divers cleaning their catches for cooking that evening, presumably.

The further south we go, the more swim-friendly the beaches get, and so we wasted no time getting swimsuits on and checking out the water.  We found it to be still a bit chilly for full-immersion swimming and not wavy enough for Boogie Boarding, but low tide exposed an enormous shell, critter, and bullwhip-sized kelp hunting area that kept the kids interested until nearly dark.

The next day was a weekend and therefore a no-school-all-play day, so we headed back to the beach, this time with kayaks in tow.  I had wanted to see how they did in small waves for quite some time and this seemed the perfect opportunity to find out – 1-2’ surf breaking gently over shallow sand seemed about as benign as we could hope to find, conditions-wise.

Unfortunately the Firefly (Keeper’s preferred single kayak) met us with a familiar hissing sound upon its inflation.  Suspecting a re-rupture of the hole we had repaired back in Grand Teton, we were surprised to find that patch intact and a new hole along the seam right next to it.  Not promising at all — that seam goes all the way around.  Momentarily undeterred, however, I talked Keeper into going tandem with me in the Sea Eagle, which is technically a single kayak, but can easily handle our combined weight.  Plus it’s self-bailing, which I figured would be a good feature in the surf.

I discovered quickly and to my surprise that Keeper and I had very different ideas about what constitutes fun when maneuvering among waves on/in something that floats.  After pushing quickly through the surf line, checking things out a bit, and getting used to the handling of the kayak, I turned back toward the breaking waves, only to have Keeper inform me, more than once, that he was “very uncomfortable” with my intentions.  It took his telling me a few times, with increasing urgency, for me to realize that he really meant it.  Unpacking it a bit later (after discovering, incidentally, that an inflatable kayak is a terrible thing to ride a wave in and essentially wants to either swap ends or turn sideways to the wave and then invert – fortunately we were in two feet of water so none of that mattered much), he told me that his last two attempts at Boogie Boarding had ended in him grinding his forehead into the sandy bottom due to the nose of the board being too far forward and digging in.  Furthermore he informed me that he was “two seconds from passing out and drowning” each time this happened, as he hadn’t had a chance to take a breath prior to going under.

Huh.  This may put a damper on my master plan to get him to learn to surf with me this trip.  We may need to revisit.

In the afternoon we drove down to Mendocino to grab some dinner and take a stroll there, but not before seeing a group of decidedly beachy-looking 30 or maybe 40-somethings hanging out in low chairs with towels and a snack-filled mini table on our beach, a couple bottles into a cooler of wine, with one of them diligently shucking fresh oysters and passing them out to the group.  It looked like they were getting ready to build a fire in order to press well into the evening.  So cool.  And so very California.

Mendocino is pretty much picture perfect, and has been deliberately preserved as such.  The picture below is from a bit too much of a distance to get the full effect, but it sits compactly on that spit of land jutting into the ocean and is as walkable as it is picturesque.  We opted for some pizza in a restaurant that had been converted from someone’s house, and we ate up in their loft, where they still had couches and toys for the kids to play with.  There was also gelato – bonus! 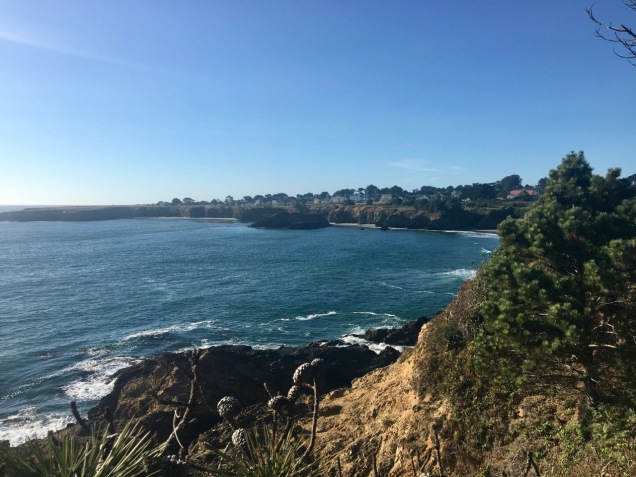 I know that Tacco has previously written about her semi-obsession with sea glass collecting.  Well, when I told her that Fort Bragg, which is a few miles north of Caspar, has a famous “Glass Beach,” she chalked that into our “absolutely must visit” column.  Not deterred by my telling her that the actual collection of glass there was prohibited, she read more extensively about it and learned that there are actually several “glass beaches” in Fort Bragg and only the officially named one prohibits collecting – so off we went after dinner, in a race with the sunset.

We turned out not to be the only ones with that idea, but it didn’t matter at all – there’s such an abundance of sea glass there, you could collect as much from a square yard or two as we’d collected on all the other beaches on which we’d searched, combined.  We now have several bags of multicolored sea glass awaiting Tacco’s deft crafting hands.  I’m eager to see what she comes up with. 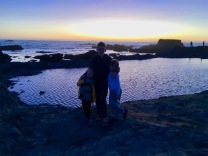 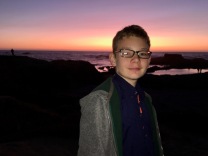 Tomorrow we leave for my parents’ house in Alamo (SF Bay Area), which we’re all really looking forward to.  Primarily because we get to see them and my sister’s family, of course.  But it’s more than that – I think there’s an element of “taking a breath” that we all need.   We’ve been going going going since we started, with our average stay someplace being about 3 days.  Only in Park City did we stay longer than a week, and we packed our schedule quite full there too.  The plan in Alamo is to park in my parents’ driveway and stay awhile.  The girls have, for weeks, been asking “how many days until we get to see Grammy and Papa?” even though they’re quite capable of counting for themselves, and have expressed their intentions to immediately set up camp in one of their bedrooms, in order to sleep in a “real bed” for awhile.  Keeper has similarly talked about having an actual bedroom with his “own space” to stretch out in.  We need to pay attention when they say such things, it strikes me.  Actually I could’ve stopped that sentence at “we need to pay attention.”  Seems solid and overarching.

I’ll be flying a trip for work while the rest stay behind, but even that sounds to me like a throttling back for a bit rather than an imposition.  We have no plans, or at least very few, and evidently that’s something we could all use a little dose of.

2 thoughts on “Drivin’ and Cryin’ (The Mendocino Coast)”