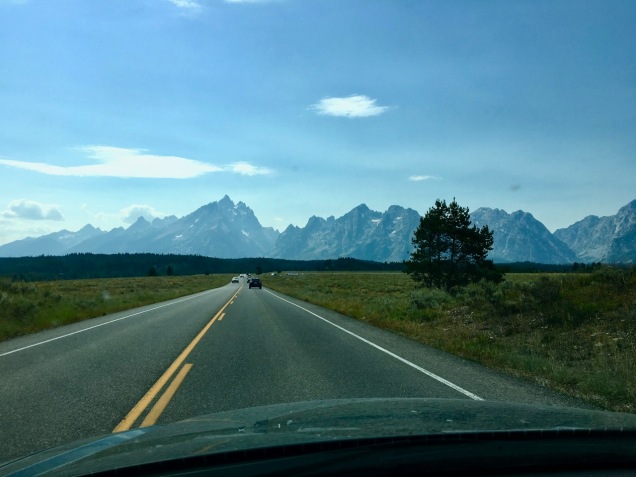 This is a place I could really get into.  There’s a big “but” once again though, and it’s similar to Yellowstone’s big “but.”  It’s not an RV place.  Which, OK, I suppose it’s no surprise, if I really think about it, that the places I really resonate with aren’t particularly RV-friendly.  Living in an RV now, though, it affects us.  Of course.

So we drove down from Yellowstone to Flagg Ranch, where we’d reserved a spot for the next few days.  Flagg Ranch / Headwaters RV park actually isn’t in Grand Teton NP proper.  There’s a chunk of land in between Yellowstone and Grand Teton that isn’t National Park per se, but is administered by the National Park Service, and that’s where we ended up.  First impressions were mixed.  It’s in an area that has had several forest fires in recent years, so the scenery isn’t especially stellar for the area.  And one of the hallmarks of Grand Teton National Park, I think, is the view of the Tetons you get from pretty much anywhere, which is uniformly breathtaking.  We didn’t have that view.

Still though, it wasn’t a bad campground, with the Snake River easily accessible and a decent amount of space, particularly compared to our Yellowstone campground.  We went a little large with the setup, and not only hung both of our hammocks for the first time, but put up the LED lighting in the Clam as well, for after dark card-playing (disco lighting optional, but encouraged). 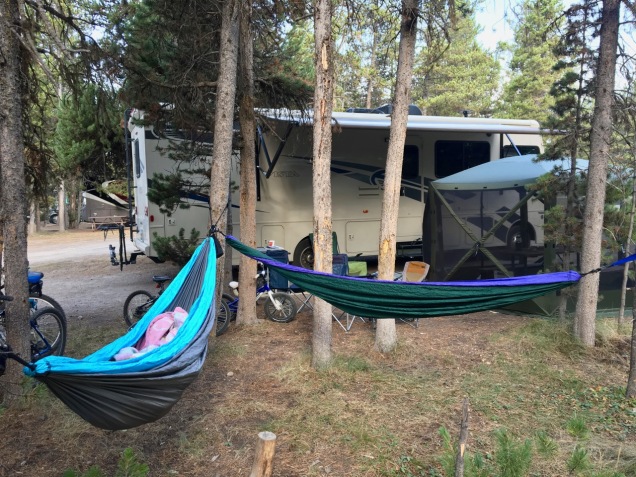 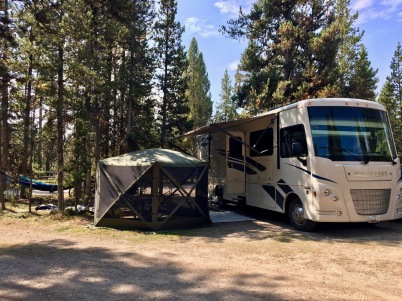 One again neither internet nor cell phone coverage, so a bit tricky for us and trickier for Keeper.  We even received an offer on our house (deliberations thereover covered well and thoroughly by Tacco in her post), so that dominated both our thoughts and our immediate location planning, bars of even 4G signal being difficult to come by.

As all of Grand Teton’s destinations involved a 20-30 minute drive to the south, we jumped in the car after setting up and headed toward Colter Bay, the park’s main center of activity.  What we found there set up a major semi-internal conflict for me.  Tacco has previously referenced my need desire to always be set up in the best campsite available at any given place, which I inherited from my father.  Proudly, I might add.  Well, there were better campsites in Colter Bay.  They were first come first served, so I hadn’t been able to browse or set us up in them prior to arrival, but they were well wooded, near the lake, and even had a bar or two of cell coverage if you contorted your body and the wind was right.  They didn’t, however, have electricity or water, so we’d need to run our generator if we wanted power.  I recruited Keeper to beat to death the pros and cons of transplanting with me; fortunately he was game, so I didn’t have to deliberate in silence.  Ultimately we decided that the slight satisfaction we’d gain by being in the best campsite wasn’t worth the time and effort involved in uprooting from our current spot at Flagg Ranch.  This was progress for me.  In the past either I would’ve subjected the family to a move or brooded about the fact that we hadn’t moved for at least another day.

Junior Ranger duties and short hike complete, we returned to Flagg Ranch for the evening.

We (especially I) had been very much looking forward to getting the inflatable kayaks out of their storage bags and putting them to use.  They were one of our bigger purchases prior to the trip, with the thought behind them being that we’d often be near water and they would become our primary mode of recreation, along with the bikes.  Unfortunately they hadn’t gotten as much play as I’d envisioned, as the effort involved in removing, packing, inflating, deflating, etc proved just daunting enough to keep them in their Davista storage compartments.  But in Grand Teton I was determined to change that.  Not only was there the Snake River to float, but the mountain lakes there are legendary.  If we weren’t going to use them here, we probably never would.

We opted to drive to String Lake the following day, between Jenny Lake and Leigh Lake.  We had hoped to float them down to Jenny Lake and back (or maybe carry them back?), but a quick Google Maps view, which I couldn’t do due to lack of internet, would’ve told me that the two lakes are not only farther apart than I had envisioned, but separated by several log dams and some serious rapids.  So we stayed in String.  And it was glorious.  Clear, not-too-cold water, scenery forever, wildlife all around.

It was a bit of a learning curve getting our flotilla out of the RV, into the car, out of the car, to the lake, and inflated, and as Tacco mentioned, we had some puncture mishaps.  But it was so worth it. 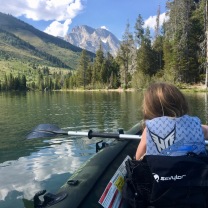 While my appetite was whetted for much more Teton scenery, much of it is unfortunately (sort of) only accessible via hike, so we’ll be experiencing it from a distance.  Tomorrow we float the Snake! 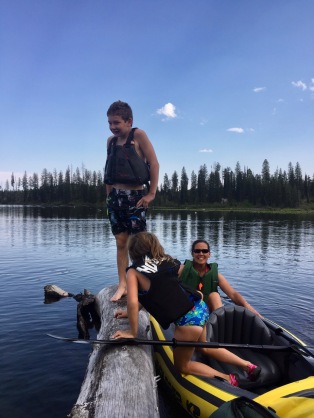