If you’re departing by air out of Long Beach to points North, your flight path takes you over the ocean just north of Palos Verdes, and then into a right turn that takes you back over the coastline at Malibu.  One day few years ago when I was doing just that, we were flying this departure as usual, and my mind wandered toward the normal “where do I want to raise my family?” dilemma.  I mentally hopscotched through the “near a JetBlue domicile would be great, but most of the places we’d want to live aren’t near JetBlue domiciles” squares and landed on “is there anywhere in Southern California we could live?”  Mind you, I hadn’t said a word up to this point – this was all familiar terrain for me, and I generally assume my mental meanderings aren’t of interest to my copilots.  But looking down, I saw the clear water sparkling in the sun, the gorgeous coastline with the Santa Monica mountains rising behind it, the waves breaking, and the huge green lawn in front of Pepperdine University (this is where we generally cross the shore).  Absentmindedly, I tossed out “you know… I could live in Malibu…”

He turned and looked at me blankly.  These being the first words I spoke in flight since “After Takeoff Checklist complete,” it was probably a bit jarring, but more than that, it was random and ridiculous.  Similarly nonsensical things I could’ve opened our flight with:

“you know… I could drive a Lamborghini.”

Is there anyone who couldn’t live in Malibu?  Sure, there’s the extra twenty or thirty million burning a hole in your wallet you’d need, but details…

There’s something very old school LA about Malibu when you peel back the veneer of fame and fortune.  Gidget was filmed there, the beaches are quite small and have a remote feel to them, everything looks a bit retro…  I picture the Beach Boys lip-syncing to Surfin’ USA in striped suits while people on longboards twice their height pretend to ride waves in the background.  Our choice of RV accommodation did nothing to disabuse me of this image.  The Mailbu RV Park sits on a bluff right above the Pacific Coast Highway with views of the ocean from every site and palm trees scattered throughout.  Unexpectedly, we landed there in the middle of a “rally,” which turned out to be a grouping of people with retro travel trailers dressed up and polished to the nines.  Sort of like an old car show, but with everyone staying the night to party in their cars and a pirate theme to boot.  If we were more ambitious we’d have attempted to mingle more with the rally-goers and taken part in the pirate parties, but we already had a somewhat full evening schedule [read: we fall asleep early].

Chief among our priorities was seeing our nephew, who was recently recruited to play water polo for Pepperdine and had a match this weekend.  As the RV park is about 2 or 3 miles up the coast from the campus, it was easy to visit and catch his match, for which he’d arranged getting our tickets.

There’s a funny family anecdote about Woodsprite on one of the first times she saw him at a family gathering.  She’s a bit tentative by nature, and he’s 6’7” with longish hair and a beard (though he may not have had the beard at the time).  When she first met him, he playfully chased after her, angling for a hug, and she came unhinged.  She was terrified of him the entire Thanksgiving weekend and hid whenever he was near.

This hug, however, lasted for about a minute or two; clearly she’s over that now. 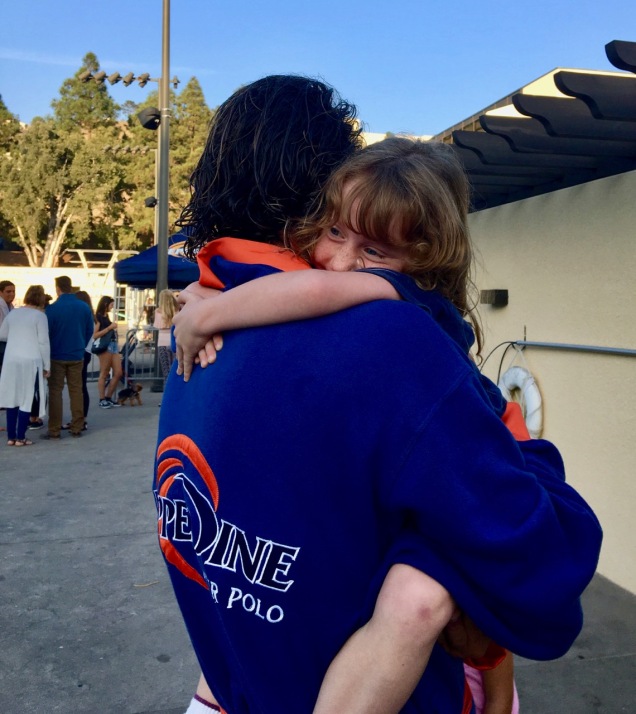 Tacco has covered her impressions of a collegiate water polo match previously – I was at least as surprised as she was.  It’s brutal.  I now understand why so many Navy SEALs come from water polo playing backgrounds.  We saw a bloody gash over a player’s nose, another guy come out of the game with a bite wound on his hand, and brawl upon brawl in the water, with multiple “hold downs” where someone’s forcefully keeping an opposing player under for much longer than would seem prudent or legal.  Sure, it’s easy to hold your breath, but not while you’re maximally exerting yourself and don’t have the chance to inhale prior to being yanked under.  I’m surprised there aren’t more incidents of needing to stop the match to drag someone floating face down out of the pool to perform CPR.  Seriously, I am. 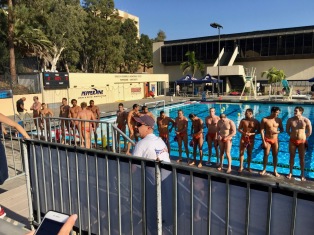 At any rate, it was an exciting match and Pepperdine defeated Long Beach State soundly, after which we were able to treat our nephew to dinner at Duke’s right on the water.  It happened to be parents’ weekend there as well, which made the stroll around campus after his match even more pleasant.  Hard to beat Pepperdine for campus location / beauty. 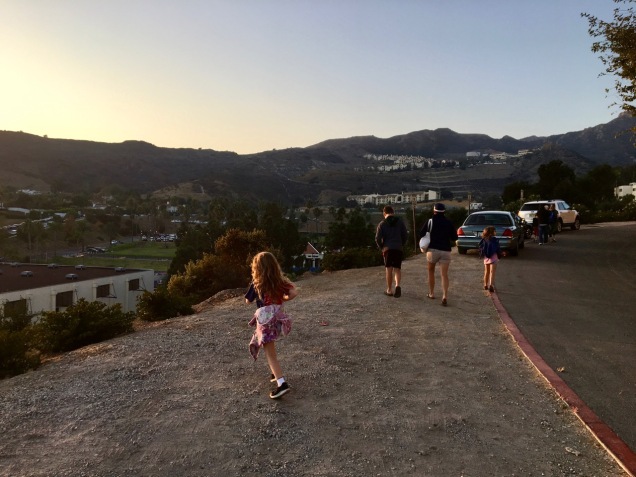 We drove up to Calabasas (through surprisingly rugged and remote Malibu Canyon) to visit some more family on Tacco’s side, but other than that it was a beach / rinse off / repeat type of weekend.  So relaxing, and Keeper built on his body boarding skills.  He still ignores his dad’s efforts to coach him on paddling into waves rather than staying in no more than waist-deep water and pushing off the bottom to get his forward motion, but it’s at least partially an 11-year-old’s job to ignore Dad’s advice.

The beach right below the RV park was excellent and sparsely visited.  It struck me how incredibly much beach square-footage Malibu sports when compared to the rest of LA – it really benefits from its remoteness.  We toyed with the idea of checking out some of the other beaches in the area, but ultimately decided we had a great one right at our doorstep, so why venture afield? 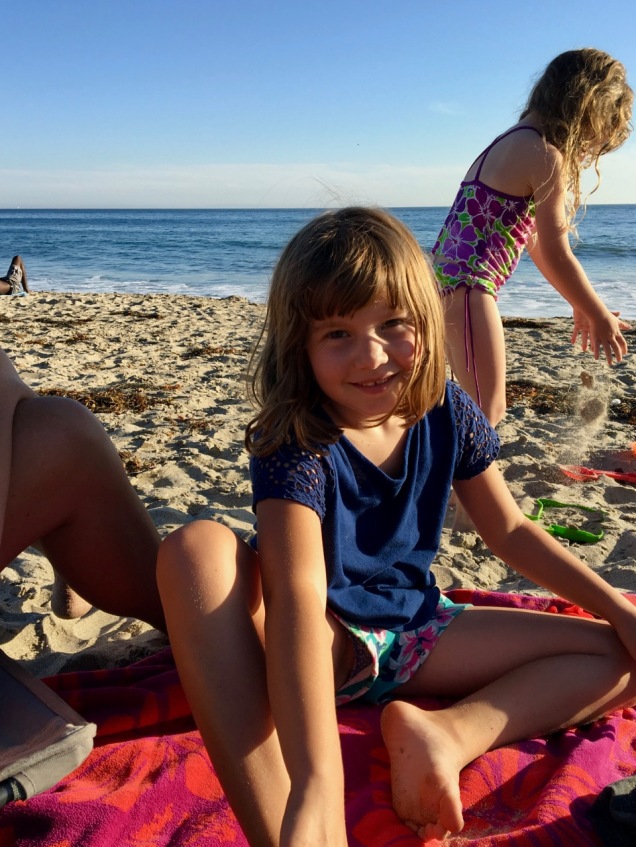 Perfect weather too, did I mention that?  It was.  LA folk are fond of telling outsiders it’s always like this, but I know from experience it isn’t.  It’s mild much of the time, that’s certainly true.  But crystal clear with perfect visibility and 85 degrees?  No, that’s a great day.  And we had three of them.

Everyone seems chilled out by it all, and we’re looking forward to our next stop in Crystal Cove, just south of LA on the border of Newport and Laguna Beach.

The only negative I can manage to toss in here is that on our drive out, we passed Surfrider Beach in “downtown” Malibu (which doesn’t exist, but this seems to be sort of the center of gravity of the place).  Looking out Tacco’s window I saw perfect, and I do mean PERFECT learner waves breaking off the point in a glassy sea, with what were clearly student surfers doing what I had been hoping to do.  If we had only ventured afield the day before, I could’ve joined them.  Maybe even the whole family!  OK, maybe not.  But if that’s your biggest complaint… 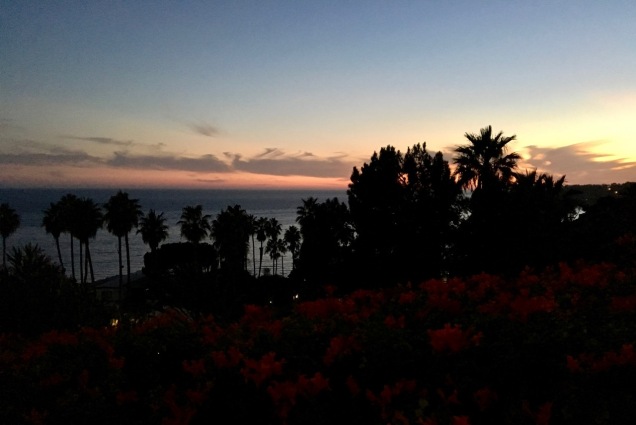