Not sure there is one, but that got your attention, no?  Having never been to Malibu, I really had no idea what to expect. In retrospect, what I guess I had envisioned was a little something like this… Mad Pacific Ocean views that go on and on, dotted by surfers bobbing in wait for the perfect wave and with the near-ground taken up by cozy retro beach cottages boasting price tags in the obscene category. On the rare occasion my preconceived notions come close to mirroring realty and this was such an instance.

Here is the view from our bedroom window. 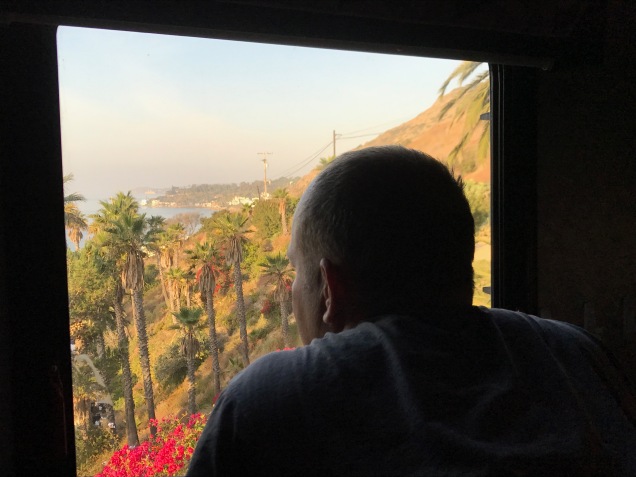 And one later on without Flight blocking the scenery.

We pulled into the Malibu RV Park, home of these rock star views, with about 30 minutes to spare before we had to race to our oldest nephew’s water polo game. If my high school memories of this sport’s controlled violence had been refreshed when watching our youngest nephew play earlier this season, they were blown away by the barbarous execution of plays at the collegiate level. There seems to be something rather unsportsmanlike to have dozens of legit (sanctioned – !!!) plays with the intent of drawing a foul to remove a player from the opposing team specifically to press the numbers advantage. Good gravy.

Our nephew plays Center (or Hole Set), which is where the majority of the match’s skirmishes seem to unfold – or maybe that’s just where my concerned aunt’s focus was. While I’d like to think the other team’s center was responsible for the lightly veiled fisticuffs (he is a dainty 6’7” and 285 lbs and performed many an obvious gator roll just outside the 2-meter mark), I’m aware that our sweet nephew is quite capable of same calculated episodes of brawling. Over dinner both Flight and I observed to our nephew that his counterpart seemed especially brutal in the match. Our nephew flashed a grin and assured us, “Oh, he is, but when you get him out of the water, he’s the nicest guy ever.” I’m still not quite, quite sure what goes on underwater, but I am certain I want no part of it. 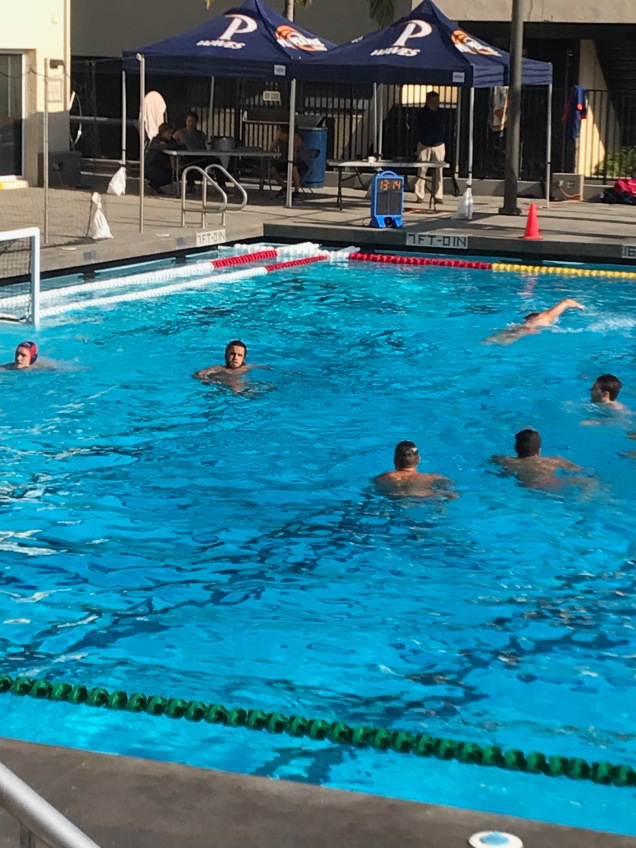 Intent on taking it all in, I had been mesmerized by the preview thrashings during warm up. My reverie was broken when I heard that this match was in part funded by the Calabasas something or other. I turned to Flight and asked, “Are we that near there?!?” “Yes, we are, so if you’d like to see your cousins, you should contact them.” As I have previously mentioned, my sense of California geography is rather, um, lacking. I thought we had one or two drives ahead of us before we neared this particular outcropping of Los Angeles and had it on my mental calendar to contact my cousins later in the week with plenty of time to schedule a leisurely visit. Well, shoot. I immediately sent a quick email and fortunately made impromptu plans to get together late the following morning. More on that shortly…

After considerable hand wringing (by me), the Pepperdine-Long Beach State game came to its conclusion with our nephew’s team the decided victors. We took him out for a celebratory dinner at Duke’s. This restaurant chain holds fond memories for me as Flight and I spent one of our first non-date dates hanging out in the Waikiki original comparing our respective minimal grasps of the Dutch language. While growing up I had been yelled at firmly spoken to in Dutch by my father and Flight had previously dated a Dutch girl, which meant we were then on equally poor footing with our vocabulary. Flight has since become fluent in the language (lucky!), having studied Dutch at the Defense Language Institute prior to his posting as an exchange pilot with the Dutch Navy, whereas my familiarity with the Dutch language has not advanced noticeably. I have often marveled that while some men might take up a new sport to get in good with a future father-in-law, learning my father’s native tongue and living in the fatherland really goes above and beyond. Good man. Both of them.

We parted ways with our nephew hoping, but not really, to see him over Thanksgiving. If his team performed well for the remainder of the season (WOO HOO – GO WAVES!) he’d be stuck in the pool with his teammates over the holiday (Um, yay?). If they didn’t do as well as they hoped (boo!), he’d join us in Grass Valley at his Dad’s parents’ place, which is truly a special gathering (YES!).

The next morning we had a delightful, albeit it far too short, visit with my father’s brother’s daughter and her family. Of all my first cousins, she’s the one with whom I have spent the most time – and I think the world of her. She lived with us for a summer in Algiers while I was four and my sister was newly on the scene to help my folks as we all adjusted to becoming a family of four – pretty cool gig for a high school summer. She also stayed with us for a stretch while getting her feet on the ground in the professional music scene in Chicago. She is a classically trained orchestral flutist and was on the soloist circuit for a while before she packed that in, moved to LA and started a now very successful television film company. No drive, that one.

Because our short time together was so precious, Flight and I acknowledged our bad parenting before permitting our kids unlimited screen time so we could catch up with minimal interruptions. Their oldest is away at Texas A&M studying Ocean Engineering (because that’s what all the cool kids do) and the youngest was off taking the SAT before his high school water polo tournament later that afternoon. Obsession with this ruthless sport must be a California thing, not unlike Maryland’s Lacrosse Madness (that’s a story for another time…). Although neither my cousin nor her husband is officially retired yet, they are both spending less time working and have become involved with several community projects, not the least of which was starting a local youth orchestra. Good for them.

We were so busy visiting that I neglected to take any pictures to prove it actually happened, so you might be thinking I’m making this all up. As expected, I had a fantastic time with them and am still wondering why we haven’t made it a more regular occurrence. When last we connected I was solidly pregnant with Firebolt and I’m hoping it won’t be another nine years before we see them next.

My heart replenished with all the great family time, we headed to the beach for a leisurely afternoon. We each assumed our standard positions: Keeper and Flight were boogie boarding, Woodsprite was frolicking at the shoreline, and Firebolt was engrossed in a book. After twenty minutes or so of baking in the sun, I decided it was time to cool off in the waves, where I pulled a total rookie move.

For those of you far savvier than I, this needs no explanation, but for the rest of us clowns residing in a big top, I offer this observation. Although I may have earned my undergraduate degree studying Ocean Engineering and might even have taken a course on Wave Dynamics, it was somehow lost on me that in practice, despite our best efforts to quantify her actions, the ocean really just does what she wants. For example, should one be nanoseconds tardy to the wave riding party, she has no qualms about running said dawdler through an aggressive shoreline wash cycle, complete with sinus cavity flushing. While I have previously experienced such aggressive drummings, it was never while sporting brand new Oakley sunglasses perched on my nose. Flight and Keeper both looked at me quizzically as I prepared to body surf, but neither of them said a word about the new glasses adorning my face, perhaps operating under the incorrect assumption that I knew what I was doing. My angel similarly remained silent. Perhaps she was too busy shaking her head…

In case you were wondering, Oakley Fives have a float time of about three seconds (Flight briefly had eyes on them when I resurfaced, spluttering) before they become one of Ariel’s trophies. Since my back-up pair looks as though the girls have repeatedly used them as an American Girl doll-sized skateboard (they haven’t), it looks like I’ll be running to the Navy Exchange to replace them when we get to San Diego next week.

Flight already mentioned that the Malibu RV Park was pretty incredible, which it was, and that we’d arrived in the midst of a vintage camper rally boasting a Pirate Night shindig, but he neglected to mention our neighbors. We got to talking with the lovely family in the next spot over. They were visiting from Denmark and doing an aggressive tour of the Western US before flying to New York the following morning.

When asked where they had traveled so far, they mentioned they’d been in Oregon for the wildfires and Las Vegas for the shooting – not exactly the best taste of the good ol’ US of A. I further cringed when they told me they, too, had stopped in Solvang. While the Disney-esque town little resembled their homeland, they pronounced the Danish pastries as being both dead on and delicious. I guess we will have to try them our next pass through – Denmark, that is, not Solvang. Leery of compounding whatever assessments of our country and her inhabitants they might be making, I chose not to share to my favorite (and only) childhood memories of Denmark, which, sadly, include nothing from outside the gates of the original Legoland.

Speaking of Legoland, we’ll be abstaining from that park on this trek through Southern California. WoodSprite is eager to pay homage to the mouse and, as it will be for her birthday celebration at the end of the month, we’ll just go with that. But first, to Crystal Cove!