I have been very fortunate to have travelled for much of my life and, ever the armchair sociologist, I have always delighted in noting how people choose to live in various locations as well as how they observe and perceive their local lifestyle compared to those enjoyed elsewhere. No matter where I am, I find people interesting. Seriously, they are downright fascinating, especially when observing them in their natural habitat.

Early in our relationship, a very telling conversation with Flight delved into our respective motivation to attend global airshows. When I admitted my interest was much more focused on the opportunity to interact with those who fly their respective nations’ defensive gear than on seeing the actual hardware itself, Flight then incredulously asked, “You mean you have no desire to crawl all over other countries’ aircraft to learn more about them?!” Before I could check my reaction, I blurted out, “Oh, dear God, no!” And with as much disdain as I have ever heard expressed by Flight, he pronounced, “Shame on you. You need to turn in your wings.”

When I was a junior officer based at NAS Whidbey Island, I was designated the Squadron Mining Officer, which meant I had to leave the pristine beauty of the Pacific NW to go to Ingleside, Texas, for a week of mine warfare training. Truth be told, the week-long escape to warmer climes away from the semi-oppressive relentless January rain sounded not unlike an all-expense paid vacation courtesy of Uncle Sam. A fellow in one of our sister squadrons was similarly tagged for the same boondoggle, so we traveled to Ingleside together and shared the cost of a rental car, to learn the best strategies to employ the U.S. Navy’s proven air delivery mining strategies.

Have you ever been to Ingleside, Texas?

It’s a different kind of place, as are most places I suppose, but Ingleside was unique compared to anywhere I had ventured to that point. Our daily training evolutions were held at the Mine Warfare Command, housed at Naval Station Ingleside, while our lodging accommodations were in Corpus Christi, where a large percentage of Navy pilots receive flight training. Although I could wax poetic on the distinctions between the various warfare communities in the Navy, I’ll just say there were many reasons we gladly stayed among the aviators in Corpus and drove daily to school in Ingleside.

Making the first of our morning transits to attend our course, we drove through a landscape in stark contrast with Whidbey Island (see stock photo of Whidbey below). 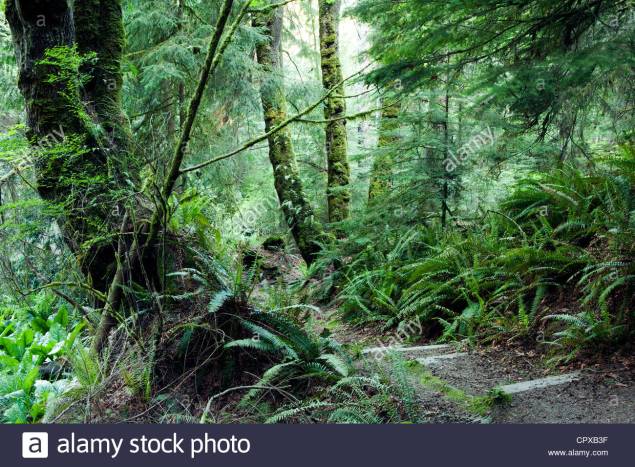 Where Whidbey topography is defined by at least as many striking shades of green as the Irish countryside (likely owed to similar precipitation patterns), Aransas Pass (the major water thoroughfare to cross between Corpus and Ingleside) was dully monochromatic in a pale burnt sienna crayon kind of way. The closest I had previously been to this part Texas was in my own advanced flight training in San Antonio. I had once traveled down to Corpus to visit some friends and, as transit took place at night, I had no idea what I had missed. Recently spoiled by the omnipresent beauty of the Pacific NW, I cynically thought to myself, “Not much, apparently…”

Out of the corner of my eye I caught sight of the sign heralding our crossing of the waterway before it zoomed by entirely. It took me a moment to sort out what I thought I had read and, laughing at myself, I shared with my fellow traveler, “I thought that sign said, ‘Rancid Ass.’” He whooped, “HA! Rancid Ass, Texas. That’s about right…”

Imagine my surprise when, hours later, we made a stop at Commissary to grab a few goodies for lunch. When I presented my check for payment, the kind woman at the register inspected my check and drawled, “Is this yer courrent ah-dress?”

She further commented, “Well, I gyess not everyone’s luckeeenough to live in TEXes…” Like I said, people are interesting.

Flash forward a couple of decades to our next stop on the Davista adventure: Mission Bay’s Campland on the Bay, where, upon our arrival, the spunky reservation agent piped, “Welcome to Paradise!” Paradise, huh? Hmmmm…

Although Flight captured the dismal surroundings quite accurately here, there are a few aspects of our stay at Mission Bay that I would like to highlight. While Flight was away, there seemed a dearth of immediately local activities for our Flight-less gaggle to explore. Having reinjured my neck, my range of motion was limited, as was my patience.

After spending the day squirreled away in Davista, following a 30 minute reprieve at the Park’s arcade (see below), and having heard enough of the dueling alternating bouts of “offensive” (Keeper’s word, not mine, although I certainly agree) rap and equally unpalatable country music, I pronounced, “Okay, pack up. We need to leave. Now.” And we trundled into the Subaru to explore the local National Park Service Memorial out at Point Loma.

“But, Mom, why do we have to leave?” I was asked as we were driving away from paradise. “Well, my friend, you know how Mom loves bagpipes? I know that not everybody does.  In fact, believe it or not, some people find them downright annoying. Because I understand that, I would never play my music so loud as to bother others. It’s just basic courtesy, which our neighbors are not demonstrating, and I can’t be around that any more right now. Let’s go check out Point Loma.” Which we did, sadly only 30 minutes before the Ranger Station closed and we had to vacate sans Junior Ranger Badges. We were there for so short a time, I didn’t even take any pictures.  Bummer. And somehow on par for the Mission Bay experience.

However, there was one shining experience I have to note. Before commuting out for his trip, Flight had shown the kids the RV Park’s expansive arcade, which was on the scale of a Chuck E Cheese pizza joint (another of my least favorite establishments), and promised they would have some time to spend their money playing games. After many requests to go, I finally acquiesced and we wandered over to the arcade.

This particular arcade has advanced far beyond quarters or tokens and instead uses a card system to keep track of both your funds and your winnings so you can spend and “cash out” your prizes on your own timeline. The catch is that each card costs $1. However, if you put at least $5 on the card, you get your money back. Ever since learning the system with Flight, the kids had been scheming and came up with the following plan. They decided they would get only one card to share in order to minimize the cost. Furthermore, they would each put different amounts of money on the card based on what they had and wanted to spend, and then keep track of who spent what as they went. I’m pretty sure they hadn’t even considered how they’d divvy up their winnings at the end of their arcade time.

Imaging all the ways this could go horribly wrong, I thought, “Hoo boy, how’s THIS going to go down…”

Getting the card was pretty straightforward and they easily loaded it with their money, but what happened next was the first of my surprises. The older two walked WoodSprite around the arcade to help her identify all the games she might be interested in playing and, based on her fund contribution, which ones she would want to play and in what order. 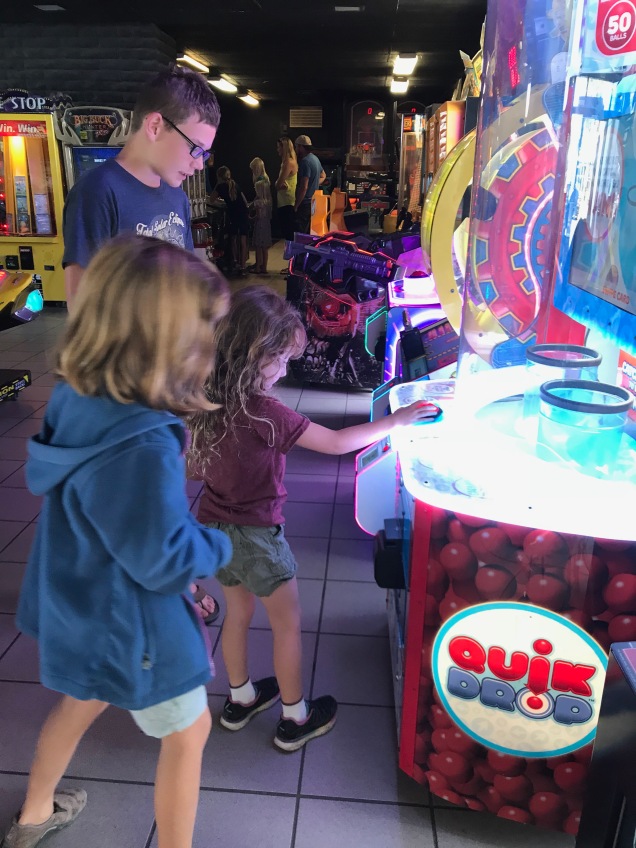 Had I been more cynical, I might have thought this was a ploy to get her to waste her money and/or time to allow the other two more of either, however it was actually the demonstration of two older siblings truly wanting to help their little sister get the most enjoyment from her share in the entertainment. Surprising me further, they then graciously took turns and played only the games whose fees exactly totaled what they each respectively put into the pot, cheering each other on and offering consolation after any less than satisfactory performances. 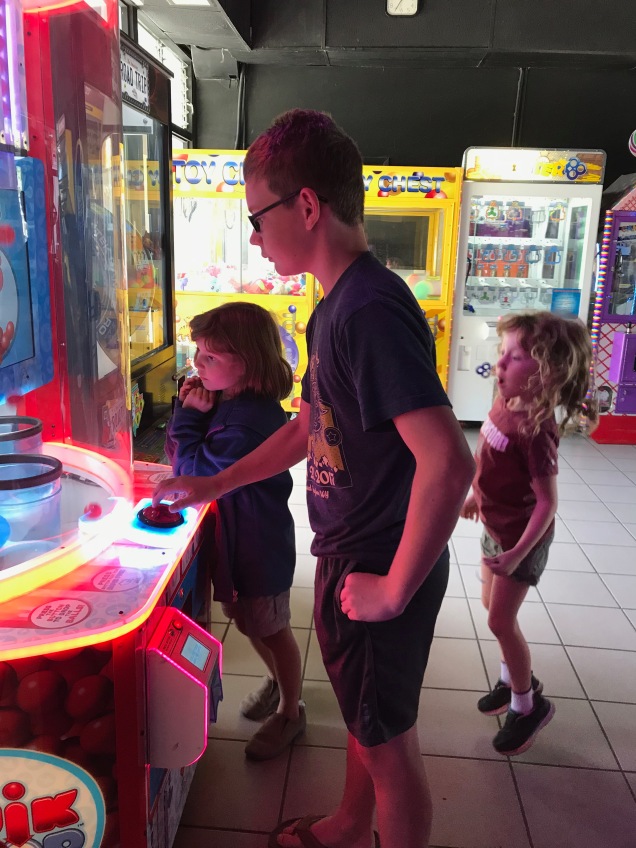 And then they were out of funds.

Knowing I would not serve as an ATM and happy to call the experience complete, they joyfully took their collective, albeit meager, winnings to the prize-dispensing machine. Armchair sociologist hat on and observing the unfolding events as a non-participant, I thought, “And here’s where it breaks down…” Before they inserted their card to cash out, I witnessed the three of them peruse all the options and then engage in a well though out discussion of the pros and cons of each potential prize before coming to a decision. 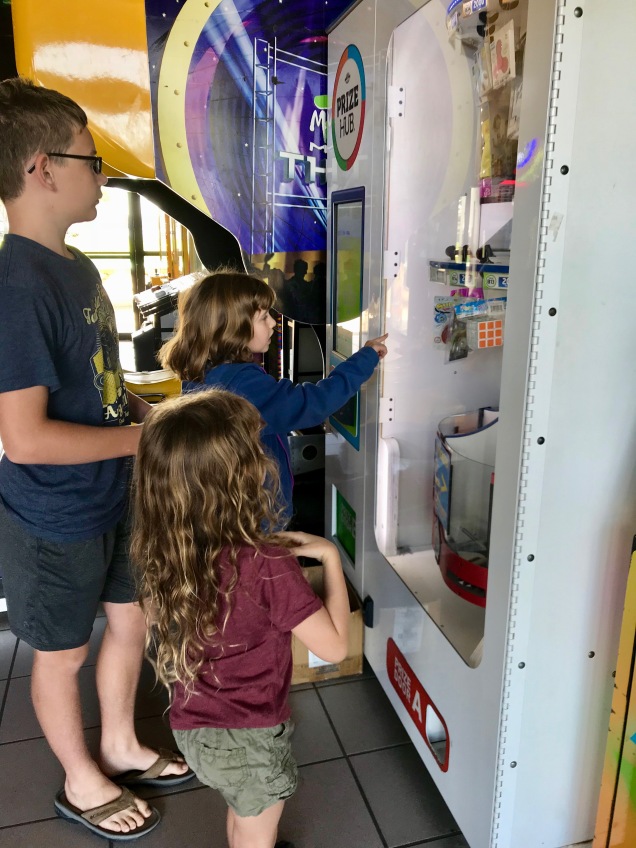 “Well, if we get the candy, we couldn’t get something else and I don’t think we need the sugar.”

“I think we should get something so we can remember our time in the arcade.”

“Well, we could get one finger puppet, but that means only one. Is everyone okay with that?”

“WoodSprite, would you take care of the finger puppet?”

And to my delightful surprise, their follow through was perfect. I’m sorry, what just happened?!

When Flight returned from his trip, I couldn’t wait to share what I had witnessed. It was very encouraging to observe how close our kids are becoming through our travels and how they truly and mindfully look out for each other. Losing a wallet, dueling music at obscene decibels, tweaking my neck, one fewer Junior Ranger badge, Spring Break in PB in October, and planning to pack out of Davista for several days while her roof is repaired, all fade to a far less egregious hue when basking in this shining moment. And, we are the proud owners of a new finger puppet to remind us of the best of our time in paradise.