Although our experience bar may have been set at all time low coming out of Campland, Coronado tends to even exceed the loftiest of expectations. And we were not disappointed this go around. Hang on, let me back up…

First, let me describe our departure from “Paradise” (simulated) and the rigmarole associated with packing out Davista and transitioning to a non-mobile residence while she had a roof lift. Most fortuitously, Flight had foreseen our Carpenteria Crunch before we even got on the road and booked a few days’ stay at the Coronado Beach Cottages at Naval Air Station North Island. Okay, maybe he’s not as fey as all that, but he had correctly reasoned we could use some time under a sticks-and-bricks roof a few months into our travels and miraculously there was room at the inn over my birthday. Good man

We rented a minivan to facilitate the transfer of our necessities (an impossible enterprise in only a bike-laden Subaru) from Davista to our Beach Cottage. Our transfer happened at the shop out in Poway, only a 20-minute drive from Paradise, if you’re from LA. If you’re not from LA, it took a brutal 45-minutes of winding through residential areas and over innumerable “speed humps.” I was happy to be driving our rental and observing the satisfactory (?) performance of Davista’s shock absorbers from a healthy distance. A far cry from the back roads of Montana, still likely less comfortable than my sweet minivan’s ride.

After transferring all we might need, along with all of the food (temperatures were going to be in triple digits for the next few days), to the Subaru and minivan, we caravanned to Coronado to check in. As it was nearly 2 p.m. by this time (and our kids informed us they were STARVING), we thought we’d stop and grab some eats on the way. We pulled into a strip mall and headed for In-N-Out. This was as close as we got: 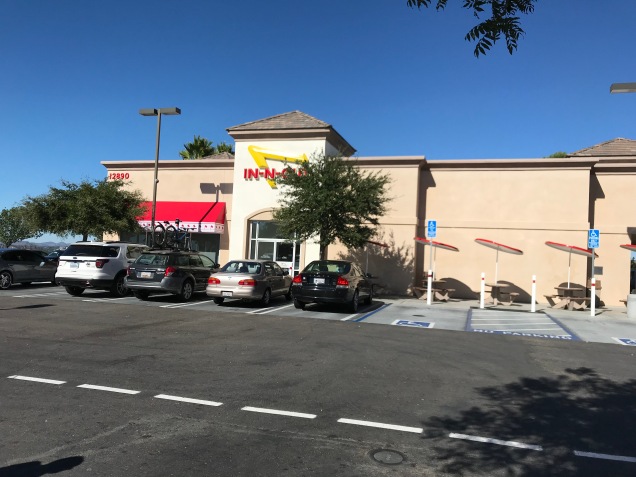 Our kids REFUSED to get out of the car. Apparently we have raised our children to abhor the notion of fast food. Keeper even said, “I can’t believe you want us to eat fast food. I’ll wait until we get to the cottage.” Of all the fast food establishments out there, fresh ingredients and a cook-to-order practice means In-N-Out floats at the top of all the greasy spoons. Ever since Flight and I have known each other, a trip to California has not been complete without a stop at In-N-Out. Although, truth be told, as the years pass Flight and I have both realized we feel not unlike garbage after consuming even their fresh creations. We looked at each other and chuckled. Okay then, everybody get back in the cars.

We checked in at the nicest Navy Lodge I have ever seen and were given keys to the most expansive 1000 ft2 I have ever enjoyed. As Flight mentioned, we have become accustomed to considerably less space and living without many luxuries afforded most Americans. Although liberating in many ways, we were all very eager to take advantage of long hot showers that required no quarters.

Our first night in Coronado, we went out to eat at Stone Brewery. I may have mentioned that Flight is a Beer Geek and, as a result, we tend to steer towards such local establishments. Although the food and drink were certainly tasty, the setting was surprisingly gezellig. The Dutch use gezellig to describe anything that, for lack of a better turn of phrase, feeds the soul. It can be applied to gatherings, places, food, drink, clothing, experiences, etc. as a means to identify the intangible feel associated with sharing in all of those with good company and yet not solely linked to any single aspect. As my inability to succinctly capture it demonstrates, gezellig has no direct translation to English, but you’ll know it when you feel it.

I say Stone Brewery was surprisingly gezellig in that its walls, along with those of the surrounding establishments, had served for decades to contain the painstakingly arduous and necessarily transformative training of new Marine Corps Recruits. Try as I might, I was having a very difficult time envisioning the grinder that was buried beneath the patio tables covered with craft beers and enjoyable eats.

While I knew it was seasoned with the blood, sweat, and tears (literally) of our nation’s warfighters, the joyful gatherings presently underway belied its angry history and I marveled at how the energy of a space can be transformed…

Although one day premature and despite all the befuddlement and fodder for future ruminations that our Stone experience provided, I opted to call our dinner at Stone my birthday celebration. In truth, Flight and I had already decided to call our excursion to Single Thread our collective birthday presents. Despite record breaking late October temperatures (104o in San Diego – seriously?!), I enjoyed my birthday immensely. I started my day watching the sunrise over the Coronado Beach while happily blogging away.

Once I was satisfied with my early morning’s work, I tucked my computer away and enjoyed a delightful brunch with the family that Flight had prepared. I say again, good man.

To celebrate gaining another year of seasoning, I continued to pepper my day with activities to feed my soul. Eager to make use of our en suite laundry facilities, I took the enormous Dumb Donald-worthy hat of Fat Albert fame I had knit and thrice ran it through the wash with boiling hot water to shrink it to a more appropriate size.

After seeing these beautiful felted creations by Carrie Cahill Mulligan the previous fall in New England, I knew I wanted one for myself:

Flight easily picked up on my coveting and, knowing I’d rather create my own, ordered the pattern from Carrie and gave it to me, along with some appropriate yarn, the previous Christmas. Although I have knit and felted several projects, there is always a leap of faith when throwing a labor of love in the washer to be distorted, albeit intentionally so. Initially apprehensive, especially using an unfamiliar machine, I set the washer to work and went outside to do yoga.

Bikram’s got nothing on beach yoga in a San Diego heat wave. Aside from the slow slide in the sand to find my footing for each pose, my body easily elongated, welcoming the dry, furnace-like calefaction and soaking in the oddly unrelenting October sun. It was glorious, and made only better still by dipping in the ocean at its conclusion. The remainder of the day was filled with a run to the Navy Exchange to replace my Oakley’s, boiling more water for hat felting operations, luxuriating for hours on the beach and savoring an easy dinner of grilled burgers and zucchini, providing the perfect opportunity to take stock of my blessings (including my new felted hat!), say my gratitudes, and get excited for Grammy and Papa’s arrival the next day.