Probably my favorite gear is that put out by “Life is Good.” I have likely referenced my standard summer uniform several times, namely that of Tranquility skort ($9.99 each at CosctoCo – WOO HOO!) paired with a Life is Good t-shirt and flip flops or hiking shoes, depending on the day’s activities. One of my favorite Life is Good hats is shown below and mine was worn to being unpresentable. 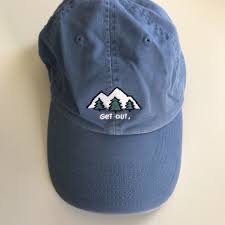 This witty, outdoorsy “Get Out” is not at all the one to which I am referring.

If I could boil my Joshua Tree experience down to two words, it would be “otherworldly” and “unsettling.” The former descriptor is hardly a new assessment of the random boulder formations creeping out of the dry desert floor. I’m typically one who likes to scope out and perfectly frame any images I can capture, but I was so blown away by my initial impressions, I started shooting from a moving Davista before we even got to our campsite. I’ll do my best to capture the unsettling aspect in what follows. 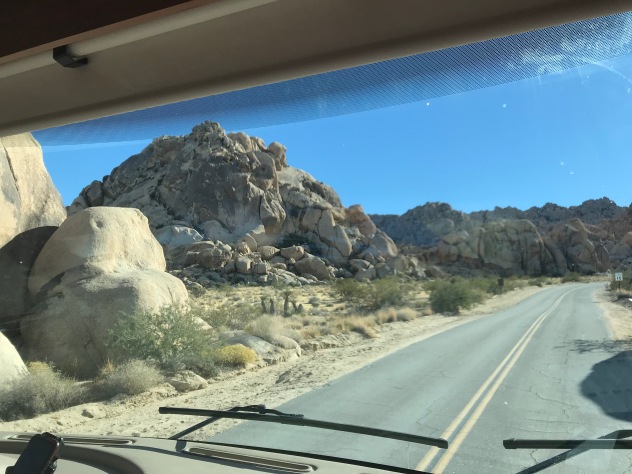 After attempting to check in with the Ranger Station (a stickie note advised of their impending return), we moved on to snug into our Indian Cove site where we were surrounded by what looked to be haphazardly strewn smooth boulders. Instead these enormous drip-castle worthy rocks proved to be of ideal traction for bouldering, which, after a cursory set-up, Flight spearheaded with the kids. While they explored the immediately local rock formations, I was happy to just settle in and be present in our surroundings, so I claimed a camp chair and took off my shoes to soak in the energy.

It was as though my skin was strangely insulated from earthing in Joshua Tree.  ???!?  For as much as I have traveled, there are some places where I have felt entirely at home (e.g. the Scottish Border Country) where others have rendered me mildly uninspired (apathetic even?). Furthermore, I know that this connection, or lack thereof, is entirely unique to the individual. For example, I know the Badlands wholly resonate with my cousin, whereas, even after taking my shoes off and standing solidly on the Earth there, I felt nothing, no movement in my being, not even a tremor. I find there’s something primal about our wiring that really ties us to some places and not so much others, but what is that really about?

Curious as to whether there is any scientific evidence that might demonstrate the why behind our being linked to specific places, I did a little research. I was intrigued to learn that there actually is a “wanderlust” gene that has been tied to feeling the restless urge to travel. Perhaps a cousin to R2D2, the DRD4-7R gene is only present in 20% of the population and linked to a need to move. It would appear that this gene has manifested strongly in both me and Flight (and hopefully our kids!). While I was delighted to learn that my biannual itch to relocate goes beyond being inculcated by the Navy’s demands to do so ever few years, I could find no scientific references to shed light on humanity’s connections to specific places.  I guess I’ll just continue to wonder as I wander…

A sense of belonging or no, never have I felt an outright, “This is not your place,” that is until I got to Joshua Tree. Hidden deep within the roots of the ubiquitous cholla and beavertail cacti seemed to pulse a low-frequency, uneasy buzz as if to say, “Leave. You are unwelcome here. Disperse. You do not belong here. Go away. Leave…” Fortunately, I didn’t hear the sentiment formed into the actual words, “Get out,” or I would have gladly listened and obeyed.  Nonetheless, Joshua Tree’s unvoiced repulsive chant was incredibly disconcerting.

And I was not the only one who heard its silence so speak.

While Flight found great solace in Joshua Tree’s quiet, Firebolt, WoodSprite and I all had wicked nightmares peppering our first night’s sleep in the Park. I awoke feeling edgy and not at all rested. However, since we were only going to be in Joshua Tree for two nights, we had to rally to make the most of our only full day in the National Park.

As the girls have become keen to earn as many Junior Ranges badges as they can on our travels, our first stop was at the Visitor’s Center where they collected their Junior Ranger books and we attended a Ranger-led talk about Search and Rescue (SAR). Since four of my five best ever P-3C flights involved SAR operations (you can read my post-mission summary of these events here), I was captivated by the Ranger’s discussion on how desert SAR is necessarily similar and different from similar evolutions in the water. Firebolt, our growing survivalist, was equally inspired by the talk.

A quick tour through the Visitor’s Center shed some light on the Park’s namesake.  In case you were wondering, Joshua Trees are not even trees – they are a type of yucca.

Nor are they found within the boundaries of the Joshua Tree National Park as the elevation is too low.  I have to say I felt a little bamboozled.  It reminded me of a stretch of the Oregon coastline that was similarly riddled with misnomers…

The Visitor’s Center also houses the history of the Park. Although given that the Marine Corps oasis (HA!), Twenty-Nine Palms, is just outside the park, I was still surprised to learn that the surrounding desert hosted more than one million service members as they trained for deployment to North Africa in WWII. Also a surprise was how much WWI gear has been found throughout the Park, meaning perhaps military training may have occasionally encroached upon the Park property. Apparently, the older gear served to outfit the WWII warfighters of the day for training purposes. We in the VP Navy fly a variant of the 1953 Lockheed Electra and are fond (proud?) of saying that we’re all about “Protecting Tomorrow With Yesterday.” Glad to see not much has changed…

In addition to learning about the varied history of the area (e.g. local mining was largely unsuccessful with only two of 300 mines proving to be profitable – !!!, military training operations in preparation first for North Africa deployments then to the Middle East decades later, Hollywood’s filming efforts necessitate the management of over 100 filming permits every year, etc), we became acquainted with the area’s cacti.

Armed with our new cacti knowledge, we headed out into the park for a hike or two. But first we had to stop to check on our stinky clutch. All seemed fine, but the Outback is not to be trusted…

Our first hike was a short amble from parking to “Skull Rock.”

The kids had a great time climbing all over the “skull” and insisted on taking pictures from every perch. 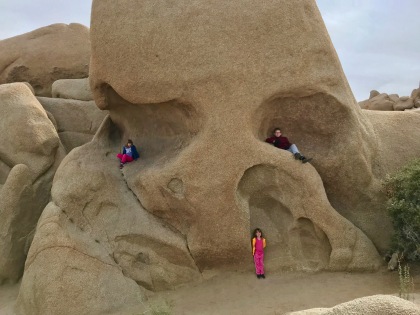 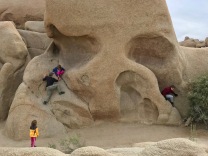 We moved on to another trail, this one a “nature trail” with placards explaining some of the geological and botanical finds we might see. Some days my vertigo can easily be overcome with the mindful placement of (and thus anchoring) my limbs. Other days, especially in the wake of a poor night’s sleep, even the most attentive grounding can’t keep my world from spinning, which means being atop great heights on rocks haphazardly strewn with deep crevices gaping beneath seems to be entirely unwise. As such, I was happy to keep a low profile and capture the experience in pixels.

Keeper in his Zen place… 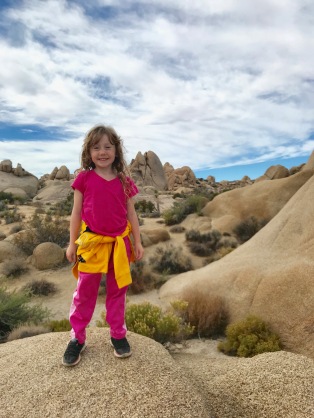 The girls tucked in… 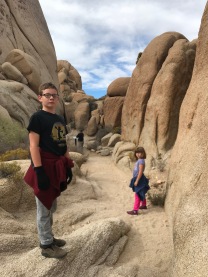 Keeper especially took advantage of scaling every sizable rock he could find, but my favorite place on the hike was through a carved canyon where he struck an unusual pose.

This stroll through the canyon inspired a discussion about flash floods and how to best get to high ground should it start raining.  And, on that positive note, we rounded out our hike and headed back to camp for a grilled dinner.

That night there were fewer nightmares in Davista, but I still awoke eager to depart Joshua Tree (as requested) and, unbelievably, to seek refuge in Las Vegas.

We stopped by the Visitor’s Center on our way out to swear in the family’s newest (repeat) Junior Rangers before making our way to the original Sin City.

One thought on “Get Out”