At last I saw a Joshua Tree – on our transit through the high desert to Sin City.

Upon our arrival at the Las Vegas Motorcoach Resort, it felt as though we were let in on a little secret. Or that we got to peek behind the RV first class curtain. As Flight described, this particular RV resort boasted hundreds of campsites that were built up with variations of permanent outdoor kitchens and/or cabanas/bars, mostly catering to overwintering snowbirds. Our site was one without any of the additional trappings, but a strangely lush and most welcome change (for me) from the haunting and subtly vituperative silence of Joshua Tree.

Somehow as I was saying grace before our first dinner in our fancy new digs, giving thanks for our blessings and asking God to watch over both Flight as he travelled and came home safely to us and the remainder of our clan as we explored locally, I lamely finished by blurting out “as we head to Hoover the Dam tomorrow.” There was a collective pause as we each silently questioned my never-before-heard turn of phrase and then choked out a borderline irreverent “Amen” before rather unceremoniously dissolving into giggles. Flight assures me he and Keeper only chuckled.

Hoover the Dam? Where on Earth did that come from? Hoover THE Dam – who even says that?! No idea, but I guess I do. And I would say I’m by myself, but my entire family has now adopted the new title of this behemoth structure. I think it may catch on…

I called to check in with my parents to let them know we’d relocated to Vegas and I mentioned the kids and I would be checking out Hoover the Dam the next day after we dropping Flight off at the airport for his next trip. My father reminded me of a project he had given his students while teaching architecture at the University of Utah. He tasked them with converting the unused space on the face of the dam into a hotel with killer views and easy access to Lake Mead above for watersport recreation.

Pretty interesting assignment. However, as I am trained as an engineer and not an architect, my awe at (read puzzled by) being required to come up with the appropriate allocation of space on/within such a beastly structure stayed with me and steadily grew throughout our visit.

I (and hopefully the kids) learned a ton, not just how the structure was built (and I’ll show just how deep my enginerdiness runs shortly) but what necessitated its development. The electricity provided by the proposed hydroelectric plant was certainly a draw, but management of the water flow was probably even more critical. Not having grown up in the Southwest US, I had only a basic intellectual understanding that water shortage was a constant concern for Arizona, Nevada, and Southern California. What I hadn’t realized was that it was more so the unpredictable flooding of the Colorado River that made agricultural endeavors in that region extremely challenging. The dam served to regulate and manage the river’s surging tendencies in addition to providing electricity. Win-win (except maybe for the last 80+ years of restructuring the downstream ecosystems…).

Before construction on the dam could even begin, four tunnels had to be cored out of the surrounding canyon rock walls to redirect the river while the massive structure was being built. Once the river was diverted, the critical foundation had to be laid. All the squishy mud and silt at the river’s bottom had to be removed all the way down to bedrock, located up to 40’ below the muck’s surface. !!!

Now this is what gets me… The dam had to be poured in concrete bricks, with each one using pipes of river water running through it, supplemented by an on-site refrigeration unit, to cool it safely through its curing process (concrete releases heat while it cures). If they had poured the whole dam at once, the concrete would still be curing through 2070 or so. By using these bricks, the concrete (enough to pave a two-lane highway from NYC to San Francisco – !!!) could be safely in place and cured in just under two years. This gargantuan structure required the skill sets of many able-bodied men (and it was all men) and they were paid quite handsomely for their efforts:

Check out the aerial cableway in the background of this photo: 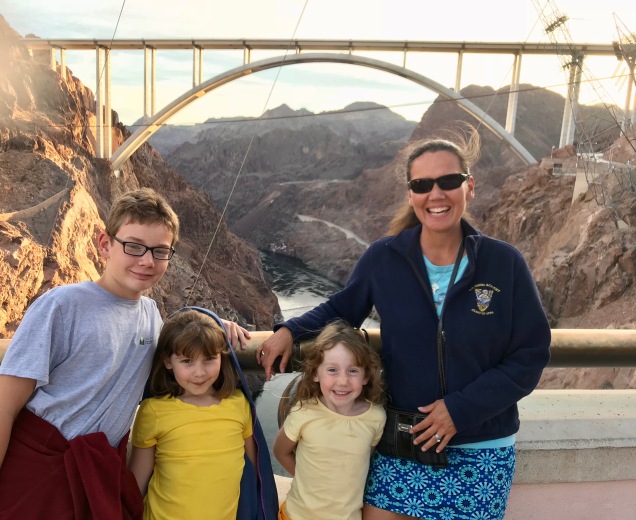 This network of cables (actually it was ten interwoven cable networks) was required to move equipment and materials across the chasm during construction. The largest of these cables (3.5” in diameter) was capable of supporting up to 150 tons (or, um, 19 school buses – !!!). These were used to lift supplies at 120 ft/s and zip them to where they needed to be at twice that fast. I’m not making this up, it said so on a posted placard.

We opted to forego the additional tour of the plant spaces deep in the bowels of the structure. Truthfully, I have not gained significantly more interest in Electrical Engineering since I performed very poorly in those classes in college, but I was happy the museum spelled out the workings of the hydroelectric plants housed in the dam’s structure so that even I was the kids were able to break it down to: higher water above moves lower and the controlled flow of water turns a turbine whose shaft is connected to a rotor whose magnets spin by surrounding wires to generate electricity. And, if you do that on a large enough scale, you can energize all of Nevada, Arizona, and Southern California.

Duuuuude. That’s all I have to say about that.

Beyond the engineering feat of safely constructing the dam and the follow on magic of generating electricity, I was impressed by how the people-aspect of the project was managed. By contract, 80% of the workers were promised nearby housing, so “Boulder City” (a town of 5000 workers and their families) was developed out of the unforgiving desert. At the height of construction, Boulder City was the most populous town in Nevada at 7000 peeps and boasted churches, schools, and recreation facilities – WHOA!

Okay, okay, the last nerdly tidbit I found fascinating was that regardless of their size, dams are rated based on their “head,” or the height difference between the forebay (the reservoir above) and the tailrace (the river emerging below the dam) and that Hoover the Dam is only a medium head dam. That’s it.  Great googlie mooglie! 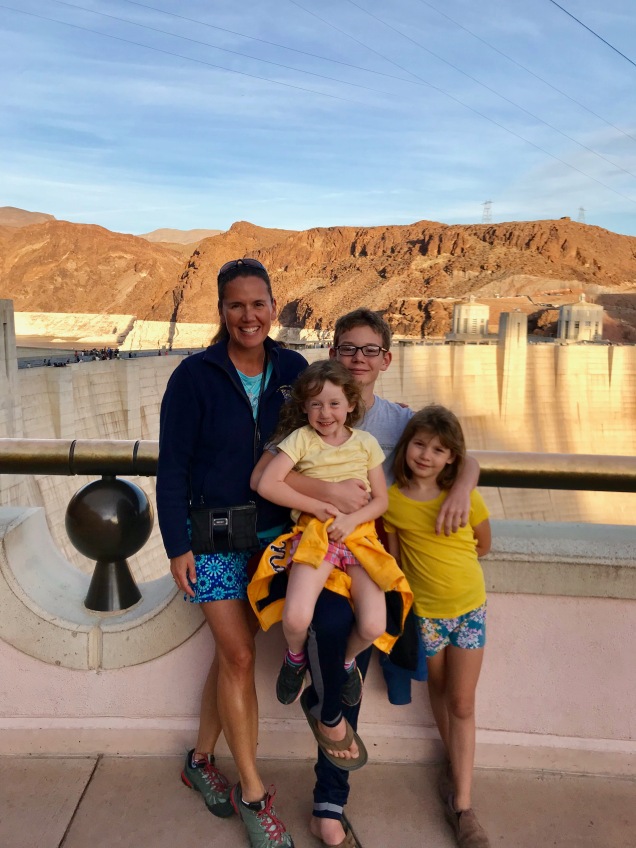 Overall, we had an awesome field trip to get our STEM on. A bonus was that Flight’s trip would be bringing him right back to layover in Vegas, which meant we could plan our next local exploration to include him before he needs to crew rest (nap) to fly the redeye back to Boston tomorrow night. After we collect him, we’ll check out The Valley of Fire…

One thought on “Hoover the Dam”