I guess seeing Death Valley immediately after Zion was hardly setting the stage favorably for this, our 6th, National Park experience.  On the plus side, it was unexpectedly toasty when we rolled into Death Valley.  Yes, I recognize that this place is touted as being the hottest on the planet and temperatures will routinely soar into the high 110os Fahrenheit in July and August, but I wasn’t expecting that just before Thanksgiving. Summer, yes, but almost winter? In fact, there is a reason the campground and Visitor’s Center is called Furnace Creek as records hold it reached 134oF there in July 2013.  I can’t even imagine how that searing air might have felt on inspiration.  Fortunately, on our short visit in late November, the temperature peaked at reasonable 94oF.  I tried to catch that in pixels, but just as I shot, the temperature dropped to a tepid 94-1oF. Dang it. 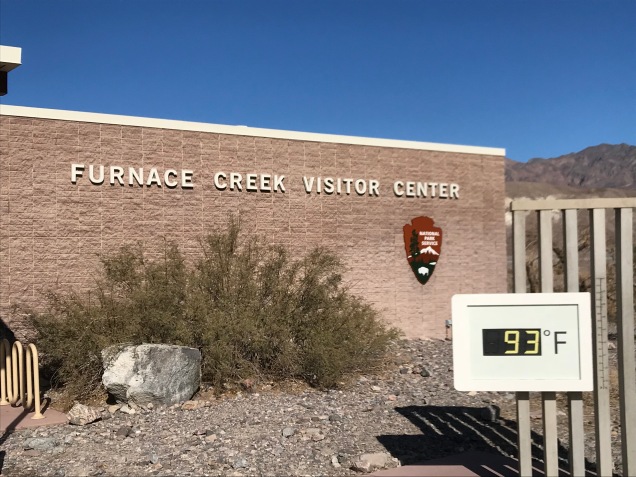 Our visit was short and sweet (sort of), aside from the clown show put on by our fellow campers. As Flight alluded to in his post, we slept often throughout the night with periods of slumber punctuated by obnoxious neighbors, a roaring desert wind easily batting our house about, and a nearby yip yip dog protecting I’m not sure what exactly.  I was most disappointed by our lack of seeing a starry night as we were driven in by the aforementioned cacophony before the clouds dissipated.  Sigh…

Our afternoon arrival allowed for the Junior Rangers in our clan to pursue yet another badge, which they successfully accomplished at the nearby Furnace Creek Visitor’s Center. 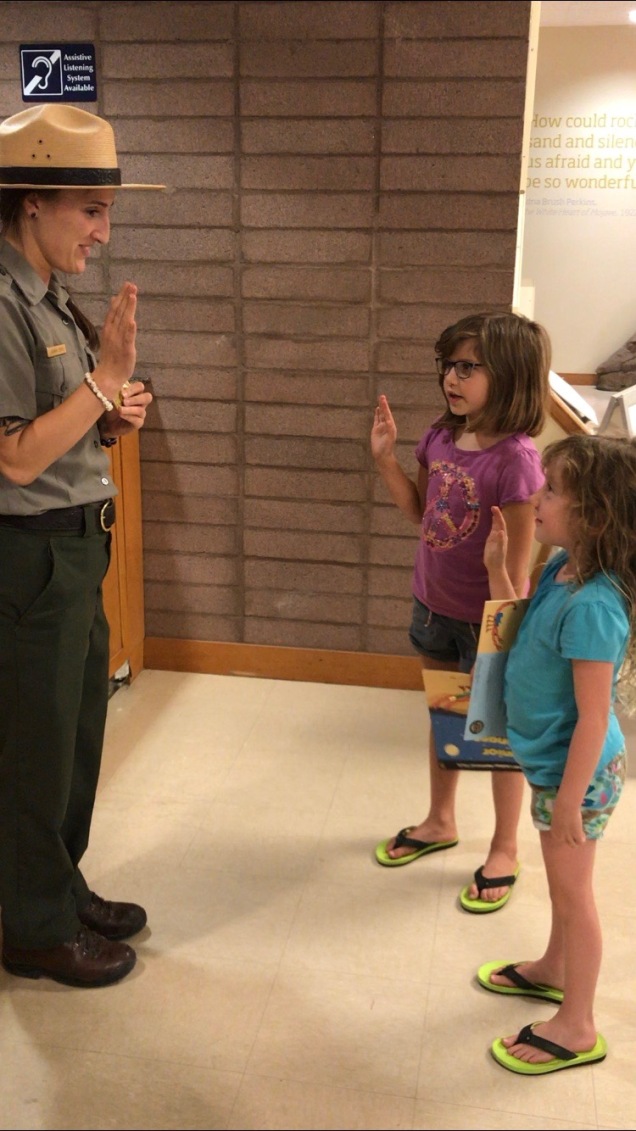 Flight and I evaluated all that we could see within Death Valley based on our very limited timeline.  I had heard about the rocks that move on their own, leaving a carved groove in their wake to indicate their unexplained travels.

While some scientists have proposed and demonstrated a plausible mechanism for their unique existence, I prefer to embrace the mystery.  Although I was keen on seeing the Sliding Rocks, when I learned they were located a scant 3.5-hour drive from our campsite, one that should require a sat-phone and a high-clearance 4×4, I became far less interested and was happy to rely on images I found online.  Maybe next time…

Instead, we chose to see the Devil’s Golf Course, which was covered with jumbled, low-lying salt formations almost as far as the eye could see.

We saw only one other car on our way out to the fairway and its occupants scuttled away shortly after we arrived to leave us truly alone on the expansive salt flat. Very eerie and certainly not where I’d want to skin a knee.  Here’s a close up view of all that dirty salt: 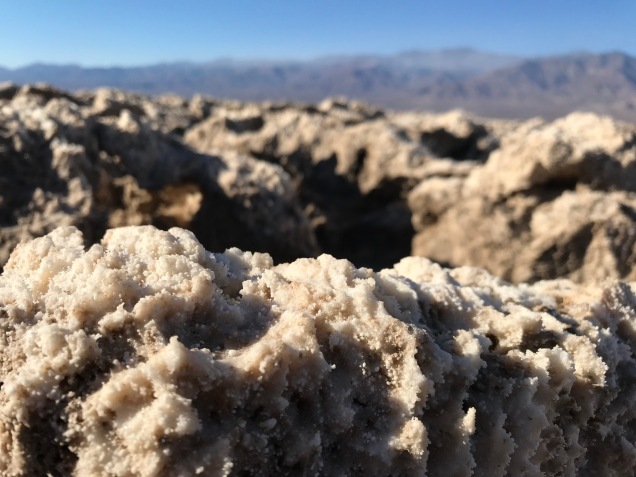 Although I lined it off the list for possible summer cottage locations, I’m glad we saw it. 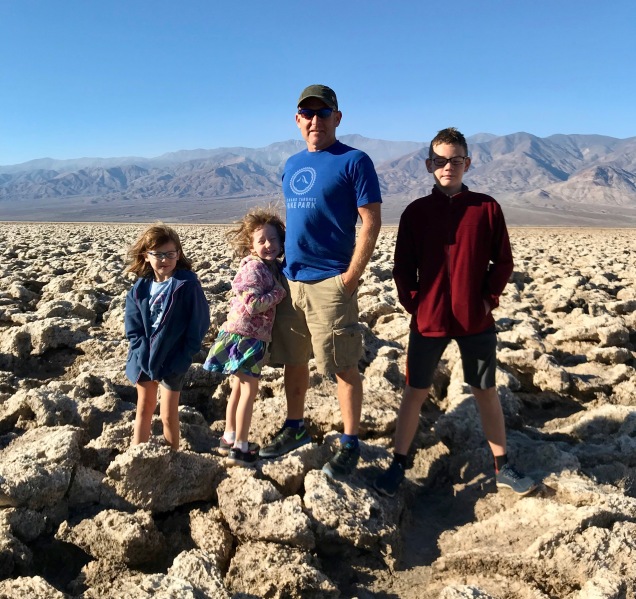 We drove back to the campsite, all a little subdued, maybe a little perplexed by what we had seen.  We broke camp and bid Furnace Creek adieu. On our way out of the Park, we drove through Artists Drive and stopped to take in Artist’s Palette where the hills are alive with the patina of aged minerals. 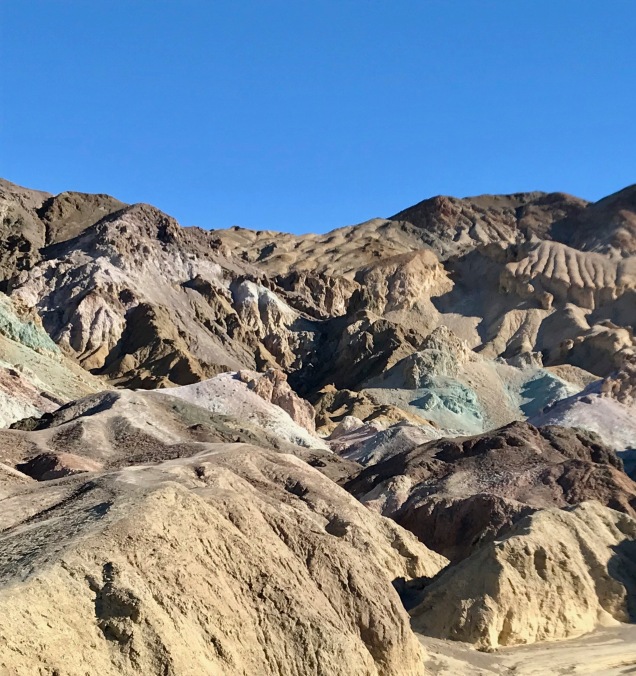 I know, that doesn’t have the same lyrical ring to it, but the mounds of muted colors were indeed awe-inspiring.  Although they didn’t exude same siren’s call for me as my red rocks, I was glad we made the opportunity to see them as well.

While seeing the lowest point in the US was one to check off the bucket list, the highlight of the trip was our brush with a runaway vehicle.

In all my years of commuting up and down Parley’s Canyon to take me from Park City to teach at the U and back home again, I had always wondered about the highway’s offshoots labeled, “Runaway Truck Ramp,” as I had never seen one in use. Apparently they’re pretty handy when a massive hunk of metal achieves an inertial state that can no longer be overcome by its braking system.   Especially on steep grades (9% in this particular case, although I’ve heard it may be more), the scale often tips to inertia because the frictional load on the brakes heats them past their functioning temperature window.  In Utah, these well-placed ramps allow gravity to take over and bring a barreling mass back under control.  Despite looking in earnest, especially once our brakes started smelling hot, I didn’t locate any on the steep slope.  Hmm…

So here we sat for a stretch to allow our hot brakes to cool enough to gently nudge them back into the safe range of temperature operation.  As Flight likes to say, it wasn’t yet an emergent situation but we could easily see disaster from our parking spot at the side of the road, IR thermometer in hand.

I have since done some more research on that stretch of road and learned that RV brake failure and/or brake fires are not uncommon, so much so that State Troopers refer to late spring and summer as “Towing Season.”  !!!  The RV-capable towing companies based near Death Valley must be nearly as lucrative as those in Pismo Beach, and I, for one, am most thankful that we didn’t provide an additional data point to stretch the season into November.  Onto the cooler climes and greener (and maybe less steep?) slopes awaiting us in Sequoia National Park…