I had never even heard of Pismo Beach, aside from a brief informational exchange with my friend whom we saw in Spearfish, ND, on our mad dash to catch the eclipse. She had previously RV’d about the country when she retired from active duty and mentioned how much she enjoyed Pismo Beach, especially the sand dollars, which (she made it seem) littered the beach. “Awesome,” I said and wondered to myself, “But would there be any sea glass…”

When Flight first suggested we go to Pismo Beach, I immediately piped up, “Ooooh, so we can collect sand dollars and sea glass?” Apparently my own musings had been transformed to fact in my mental files. He seemed a little surprised that I knew about this little beachfront camping getaway (I haven’t seen much of California) and asked where I’d heard about Pismo. I professed I had only two tidbits of information entering into our stay here: my friend told me about the sand dollars and I reminded Flight he had previously shared with me that he camped on the beach here occasionally as a kid. He went on to fill in some of the gaps and described the beach camping as being, no kidding, drive right up on the beach and pitch your tent in front of your impromptu bonfire site. Other than that, I had no idea what to expect. However, based on the data I had collected from these two savvy sources, I hadn’t expected this for our journey’s first “beach front” experience:

Aside from the impressive congregation of pelicans (never have I seen so many in one location!), my initial survey of “the beach” yielded a noncommittal, “hmmmm….” (I learned that from WoodSprite). On our return to Davista, my estimation dropped a few notches every time I paused to remove a spikey native burr from the bottom of a foot, mine or the girls’. We immediately proclaimed this a “shoes required” beach, at least until we embarked on Flight’s kayak ferry service to go across the sketchy water (aka “Pismo Creek”) to get to the real oceanfront beach. Fortunately, that was a headache to medicate when we later returned with swimsuits and beach gear and I happily banished all thoughts related. Keeper, however, was compelled to swim for it and vowed to set out across “Pismo Creek” when we returned. 11-year old boys, and ours in particular (at least at this location), seem entirely unflappable by questionable water quality (unless he’s drinking it straight up, then it’s filtered all the way).

When we returned, appropriately garbed and with appointed beach toys, Flight brought along the kayak shuttle service gear and Keeper made good on his threat to swim across the Creek.

I happily awaited the final ferry run and disembarked to find the kids already chasing down seagulls and playing in the sand. 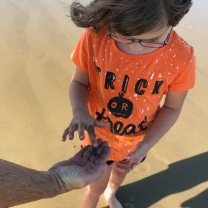 After getting set up we took a stroll to investigate the shoreline, which yielded little bounty (a few clams and some sand dollars, but zero sea glass), and Keeper then requested that his sisters bury him in the sand, and they happily obliged. No, thank you, it makes my skin itch just thinking about it.

Our departure from Grammy and Papa’s house that morning hadn’t been remotely tearful, mostly because they departed earlier that we, even before we awoke – and we’d see them later in the day. Their dawn patrol took them all the way to Pepperdine to see one of our nephew’s water polo games, after which they were planning to drive back up and meet us at Pismo Beach. Papa was at least as excited as Flight to get out on the beach and recreate some memories from decades ago.

After our afternoon at the beach, we came back to Davista to set up for dinner, Grammy and Papa’s arrival, and the Utah football game. Sorry, Flight, I meant the Stanford game. Usually, I will wholeheartedly cheer on my husband’s alma mater, that is unless they happened to be playing one of mine, then all bets are off.

Flight’s folks rolled in just before kickoff with their own bed on wheels. God bless them, they planned to sleep in the back of their 4Runner even after we offered our additional foldout beds in Davista. That evening we became those people I had previously made fun of – I mean who goes “camping” only to sit outside gathered around an outdoor cable-fed TV to watch whatever they could see at home. Strangely, I felt compelled to justify our doing so to whoever might be similarly  judging us, as right now this technically IS our home. Interesting observation, one I fleetingly thought I should sit with before the following rationalization quickly drowned it out “Well, maybe any (fictitious) judgers will see our Maryland plates and draw the appropriate conclusion.” Fortunately, I went no further down the justification rabbit hole (never a good place to explore) as I, too, became caught up in the football game. And my ongoing knitting project.

Having completed the entrelac band (the centerpiece around which I am building my next uniform sweater) while at Flight’s folks’ house, I cast on more yarn for the bottom portion of the sweater and began to knit the ribbing (hem comprised of repeated knit two, purl two) in the dark. Aside from a few visual inspections by the light of my iPhone necessitated when distracted by a great play (Hurray – I’m for the other team!) and lost track of the repetitive pattern (had to undo a few stitches), the sweater steadily progressed. Sadly, Utah did not have as strong a showing as Stanford (boo!). Even though it was an exciting game, I managed to finish about half of the sweater’s ribbed hem (again, hurray!) and I was pleased that I had something to show for our hours of being “those people.” We retreated to our respective bunks to crew rest for some foolhardiness in the sand that was scheduled for the following morning.

Before I can delve into how the events of the next morning went down from my perspective, I need to give some background to my mindset. I first learned about Operational Risk Management (ORM) back in my flying days. As the name might indicate, ORM is all about assessing any risks associated with an activity and mindfully identifying and implementing specific controls into a system or process to minimize the likelihood of those risks manifesting.   Because aviation is inherently dangerous and the associated risks have potentially tragic outcomes, ORM becomes second nature to all aviators and will often (or should) creep into how they execute events on the ground as well.

Unfortunately, even if proper ORM protocols are observed, something can go horribly wrong and, in the wake of most aviation mishaps, a “chain of events” leading to said catastrophe can usually be readily identified. Furthermore, aviators tend to pick apart any such mishaps and their harbingering chains, mostly to see if any one of the contributing events could have been disrupted, thereby avoiding the calamity altogether. Sometimes there is no way an accident might have been prevented. However, in many cases something as easy as requesting a change in altitude or mentoring a crewmember to voice a growing concern might have been enough to shift the outcome. This is an exercise clearly much more easily performed from the position of the armchair quarterback, but a critical one nonetheless as it is far preferable to learn from others’ experiences to inform one’s own future operations. Failure to conduct an ORM assessment is often identified as the link initiating such a chain.

Back to the current endeavor… I have no pictures of this crazy evolution. While I’d like to think it was because I wanted no evidence of the chain of events leading to our Subaru being washed out to sea after we were forced to execute emergency egress procedures upon being stranded in the cushy sand by the approaching high tide, I wasn’t thinking that far ahead. Instead I was caught up in Flight’s (and Papa’s) enthusiasm for the adventure at hand and had devoted no mental energy to preparing for any what ifs. Neither did Flight. Although I did bring the “Go Bag” as one of our standard precautions, I realized that wouldn’t help much if it too was floating out to sea. Only Grammy, probably in concert with Papa’s “Oh no, Flight, don’t stop here” narrative, had the wherewithal to snap some pictures as our chain of events unfurled (you can see them in Flight’s post here).

Fortuitously the only danger awaiting us was being judged and heckled by the local peanut gallery who regularly congregates at high tide and pop beers as they witness other such chuckleheads ignorant of the ocean’s role in constantly resurfacing the beach. We weren’t that interesting because 1) we didn’t get stuck (Papa and Grammy pushed us out of our predicament well out of the gallery’s view) and b) we weren’t in Davista. Ignoring how close we had just come to similarly requiring a tow, we joined the gallery and offered our own observations (amongst ourselves, of course, for we weren’t locals) as we watched RV after RV lose traction, stall, and then get pulled to safety by a behemoth tow truck for whom high tide must be extremely profitable.

While so spectating over lunch, Flight and I vowed never to drive Davista onto the beach. In addition to observing the human driven beach traffic, I took note of the seagulls that were everywhere. Especially right overhead. The sleeve of my Stanford shirt (I wore it in honor of their win last night) took a hit on one of their bombing runs, which curbed my interest in lunch considerably. That one, I thought, must be visiting from Utah…

Worn out by the intensity of the morning (and a less than restful night in the back of the 4Runner), Papa and Grammy jumped back in their car and headed back to Alamo. We spent our afternoon properly relaxing on the beach as the morning had been anything but. It was more brisk this afternoon than yesterday, so we mostly stayed out of the water (even Keeper used Flight’s ferry service).

Instead, we brought kites and the sand toys to enjoy…

Keeper wanted to be buried yet again and his sisters obliged yet again before he took matters into his own hands. Showers for all my friends before we head to Carpenteria in the morning! 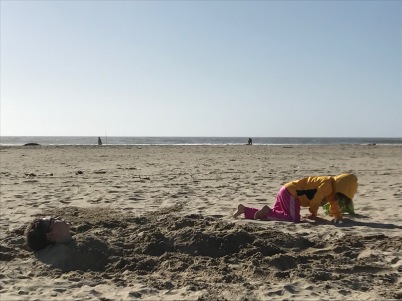 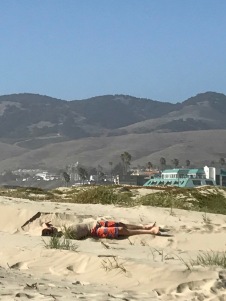 As we were gearing up for departure, I let Flight know I needed some alone time and set out for a walk. My path took me to the Pismo State Park where we’d witnessed (and maybe been) clowns driving on the beach yesterday. This particular park also houses a Butterfly Grove, where monarch butterflies stop on their annual migration south. While we were a few weeks early, I got to see about two dozen of these ethereal creatures resting up before they continue on to Mexico to overwinter. 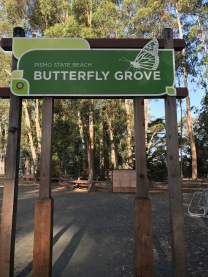 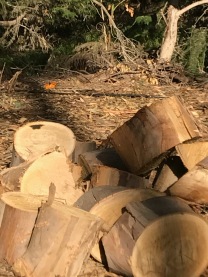 As I was walking through the Butterfly Grove I tried to imagine what it would look like covered with monarchs, as the word on the street is that’s how it looks. My mind couldn’t flex to see the vision and I was surprised by what images I found on-line.

Too bad we were a few weeks early…  At any rate, I finished up my walk with a clear head and blood pumping, eagerly rejoining our flight as we continued our own migration south.

One thought on “TACCO’s take on Pismo Beach…”