One prediction I nailed at the end of Phase One was how Joshua Tree would age in the kids’ memories.  While back in Maryland, we were often asked by friends what our favorite stops over the past several months had been, and the kids generally answered “Joshua Tree and Zion,” sometimes leaving out the “Zion” part.  There may be some recency effect involved in that answer, as we could generally elicit other favorites by reminding them of the eclipse, the beach, the mountains, the river float, etc. but regardless I don’t disagree with them.

Hence our decision to commence our traveling lifestyle re-engagement with a day spent scrambling on Joshua Tree’s rocks.  I realized this go-around how fortunate we had been previously to snag a reservation at the campsite with so little lead time – all I could manage this time was one night.  But it turned out to be enough, as Tacco had to leave at dawn (or so she thought, but that’s another story) to catch a conference in Phoenix, and without our Toad, we had a much smaller exploring radius.

Backing up slightly… I had been skittish about everything involved with the sudden transition back to travel.  We hadn’t given it nearly as much thought this time, and were slightly hobbled in our planning capability by not having Davista sitting in our driveway for a few days while we loaded her up and fine-tuned our itinerary.  Plus our mental space was entirely booked out by home sale preparation.  Among the things I had forgotten was the fact that I had left all my clothing drawers in Davista completely full upon our departure in December, and would not have had to add a thing to them in order to successfully re-launch.  So the full suitcase I brought, not to mention the extra clothes I had stuffed into a few of the six extra boxes of “stuff” we sent to our friends in Long Beach, qualified as pure bloat.  Fortunately we have room for it all and it’s not heavy, but the inefficiency bugs me.

More significant, however, was my skittishness about basically everything else – the condition of the car and motorhome, my presumably long lost big-rig driving skills, and most of all, the ability of the family to so abruptly re-adapt to our tiny new home and life on the road.

Davista looked like new, and fired right up once I re-connected her battery, as did Toad.  Supplemental systems all fully operational as well.  And remembering how everything worked and fit together took me no more than the half-day in Seal Beach we had set aside for that purpose.  The forecast LA deluge never really materialized, the kids set up their spaces quickly and excitedly, we had dinner with our friends in Long Beach, and by the following morning we were back into the groove and Joshua Tree bound.

The kids bolted straight for the rocks upon our arrival. 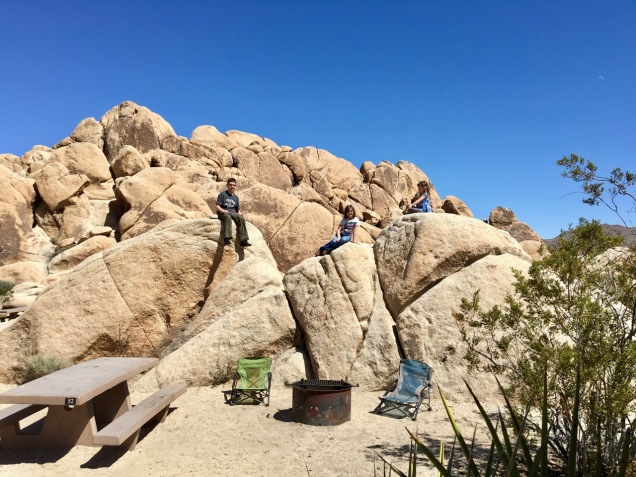 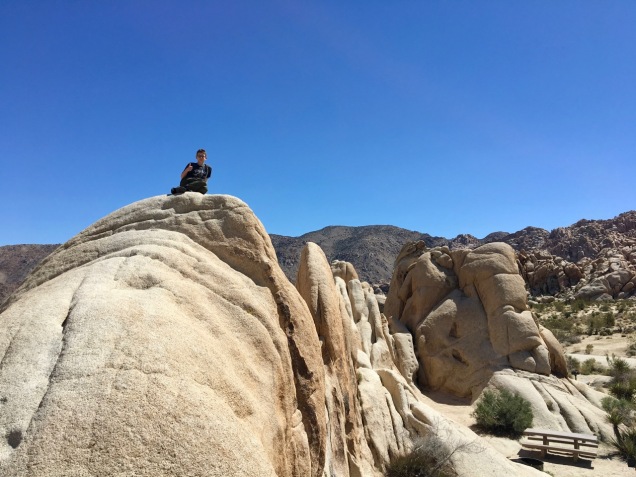 Tacco joined us for part of a family climb, but her vertigo issues caused her initially to stay lower on the rock and then to return to base and watch from afar.  The kiddos, however, and Firebolt in particular, attacked the climbing with a confidence I hadn’t seen before, which warmed my heart. 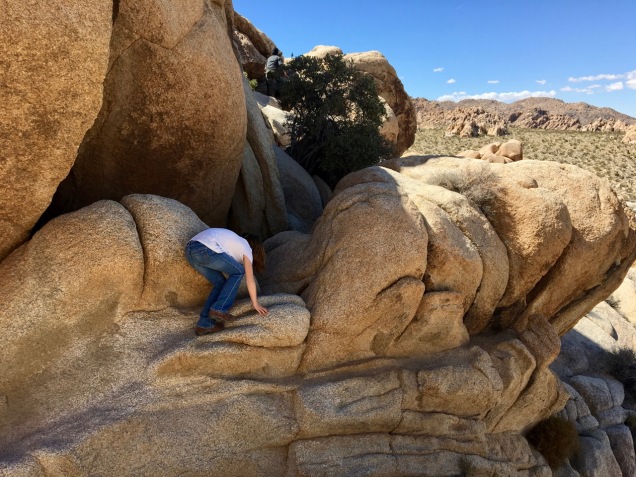 Later in the day I was able to take Keeper with me for a more sporty climb that involved a few “I’m not sure I can manage that, Dad”s, all of which he deftly conquered immediately thereafter. 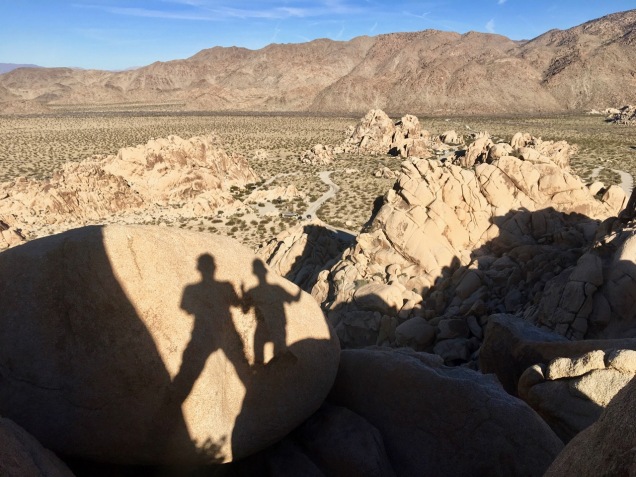 It was a very, very good day. 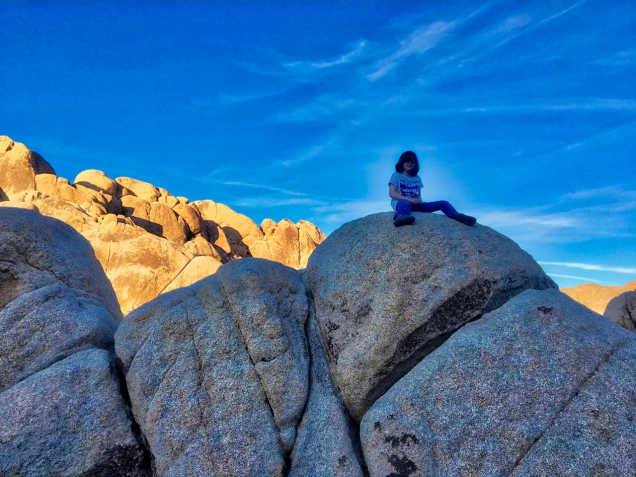 Interestingly, Tacco had another unsettled night and attributed it to the Joshua Tree vibe once again.  I’ll be interested to see how she fleshes that out in writing.  I had no such disturbance and awoke happily to the cool desert air and blanket of quiet.

Some more rock scrambling gave way to a nature trail hike prior to our noon departure, and we were out of the campsite and on our way to Phoenix by noon.

I opted to take the extra half hour to make the drive through the park rather than around it, with the intention to stop at Joshua Tree’s Cholla Garden for lunch.  Cholla, a variety of cactus, are more commonly known as “Jumping Cholla” due to their tendency to attach themselves both readily and doggedly to anything that happens to brush against them.  They don’t actually jump of course, but they do have tiny barbs at the end of their spines which make them tenacious hangers-on, as well as lots of pieces that tend to dry up and break off of the main cactus body.

Keeper had been more or less pooh-poohing the Cholla lore, or maybe more accurately, tempting fate by brushing against them lightly or even picking up a few of the fallen pieces when we came across a plant or two.  A bad dad idea intersected with his luck running out on that front when we stopped for lunch and I tried to set up an album cover-ish photo among the cacti. 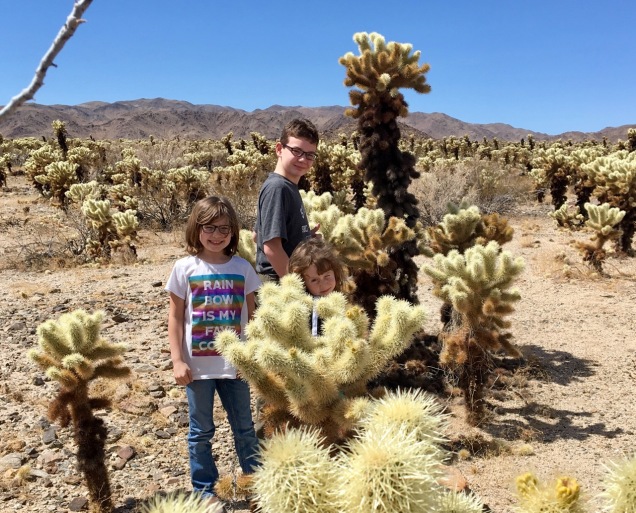 The photo’s reasonably cool even if I didn’t quite get the “our album’s about to drop” thing nailed, but Keeper’s reaction when we stepped on some wayward cholla chunks was less so (rightfully).  What dad plops his kids into the middle of a field of Jumping Cholla in the name of a picture?  This one does, I guess. 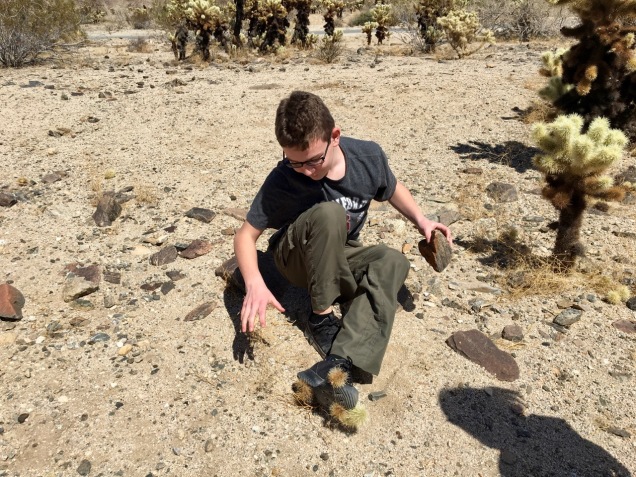 Fortunately we were able to escape this situation relatively unscathed, with only Keeper cactus-pricked and only one spine needing to be removed from actual skin.  His shoes took me quite a bit longer to de-spine, but within a half hour or so we were intact, fed, and on our way to Phoenix, where the plan is to take over a portion of my closest college friend’s driveway and lawn for the upcoming Easter week.  Not only do they have four kids whose ages approximate my kids’, but we have seen each other for years.

This is a great start!