The last time I was in San Antonio was almost 23 years ago when I was in the midst of Advanced Flight Training held at Randolph Air Force Base, and, at the end of which, I earned my Wings of Gold. As we were fond of saying then, it was six weeks of Navy training crammed into six months of  Air Force training, SIR!, which left plenty of time to explore the area.  All the military services have good-natured (mostly) rivalry that often points to the subtle differences among them and this cartoon I found online pretty much sums it up.

To distinguish how the Navy and the Air Force operate differently, our class was briefed by one of our Navy instructors on day one at Randolph.  He said something to the effect of “The Air Force tends to provide you a well-indexed, voluminous tome that in great detail defines what you can and cannot do whereas the Navy will toss you a pamphlet listing in bullet format what’s really unacceptable and then gives you the freedom to sort how to best accomplish the task at hand.”  My brief time in Air Force Training Land demonstrated the veracity of that assessment time and time again, which often translated to considerably less pressure while learning the art of long-range navigation by air.  Almost unimaginably, this skill set included learning how to take sextant shots, both day and night, from a moving aircraft to practice celestial navigation, which, sadly, has become a lost art.  After the intensity of Navy Primary Flight School in Pensacola, my whole class of fellow Navy Ensigns was thrilled to throttle back a little and luxuriate in the Air Force way.

With relatively more down time, many of our class stepped out a few times together to check out the Alamo and eat along The Riverwalk, because that’s what you do in San Antonio. Impish at heart, I rather enjoyed rattling some of my classmates, especially those who espoused local history (some almost religiously), by feigning my ignorance of key events that transpired south of the Mason-Dixon Line, “The Alamo?  Wait, wasn’t there, like, a big fight there?  And I think John Wayne was there…”   In response, one of my classmates from the heart of Georgia observed, “Aw, (TACCO), you’re all ate up with the Yank, aintcha?”  Not sure what to make of that, I said, “Um, thank you?” He imperceptibly shook his head, paused before answering and gently said, “Uh.  Naw,” letting me know that his assessment of me had dropped yet another notch by failing to comprehend the depth of the southern insult.

Frankly, more than twenty some odd years later, I’m still not quite sure what that turn of phrase means, but I’m fairly certain it’s not good.

I was adopted by my first dog (a German Shepherd puppy named Lancelot) half way through my training at Randolph, which meant I “stayed in” for most of my later months as most of my free time was consumed by logging countless hours walking Lancelot to ensure I had relatively uninterrupted sleep or chasing him down as he tried to eat my navigation charts.  Lancelot had this weird thing for paper – and eating rocks. But I digress…

While my time in San Antonio wasn’t particularly memorable, aside from getting winged and collecting fodder for future dog shaming posts, I thought it important to share at least The Alamo and The Riverwalk with our kids.  Flight, having been wholly underwhelmed by his few visits to San Antonio during his stint in Corpus Christi for his own Advanced Flight Training, assured me he was just fine missing that particular pilgrimage so we planned for it while he was on a trip.

After a solid Wednesday morning of homeschooling, the kids and I loaded into the car and drove the 90 minutes to San Antonio.  Before we got on our way, I learned that, as the nickname would suggest, the “Mission City” boasts an extensive mission network that has been turned over to the care of the National Park Service.  While I had known what had led to the rallying cry of “Remember the Alamo!” I hadn’t realized that what remains today of the Alamo was originally built as a Spanish stronghold, a presidio, to support further colonization.

When our nation was still just a collection of European colonies, each trying to outpace the others in expansion efforts, the Spanish crown was interested in growing their empire in both population and property and came up with an ingenious plan. Recognizing that these symbiotic efforts were best accomplished together, they first acquired new citizens who would then lay claim to (and pay taxes on!) land that broadened Spain’s boundaries. In order to become a Spanish citizen, there were three main hoops through which the native population had to jump: 1) learn enough Spanish and Latin to effectively communicate and observe Mass; 2) convert to Catholicism, a requisite for Spanish citizenship; and 3) learn a trade to contribute to society at the lowest level of the Spanish caste system.  Before these potential citizens could be so transformed, it was necessary to establish a local military stronghold to protect the crown’s investments.  In 1718, what is now The Alamo was the initial presidio from which the massive conversion campaign was launched through now central Texas, and four other mission sites branched out along the San Antonio River. 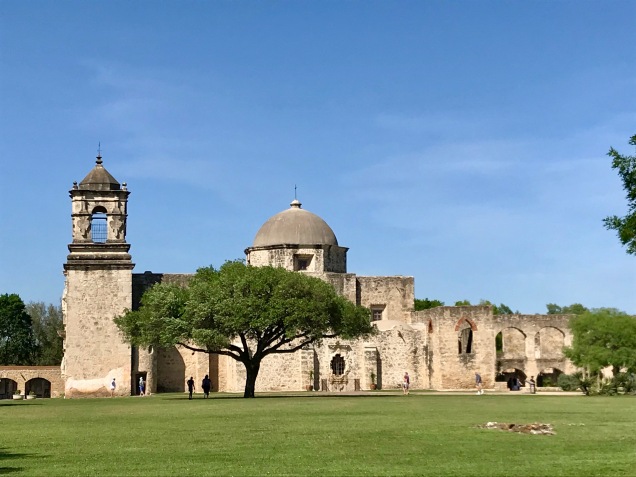 We spent most of our time at the San José Mission, which is where the National Park Service has their Visitor Center.

After picking up Junior Ranger books for the girls there, we emerged from the introductory film just in time to join a Ranger-led tour, which was especially noteworthy.  We were led about the compound on an hour-long journey where we were introduced to the initial various inhabitants of the mission and their respective roles therein.

The tour was very well done and I especially appreciated hearing both the European and the native population’s sides on how it all went down in the early 1700s.  The native hunting and gathering tribes throughout what is now Southern Texas and Northeastern Mexico were collectively known as the Coahuiltecans.  These nomadic people had struggled with warring tribes to the north and fell prey to European diseases to which they had no immunity.  The provisions and protection offered by the missions (minus the diseases) and this new way of life may have appeared the lesser of two evils.

The native people were welcomed into these compounds and offered two solid rooms for each extended family, who then took a weekly delivery of beef and corn rations and had access to several shared wells and outdoor ovens, all in exchange for making progress on becoming Spanish subjects. 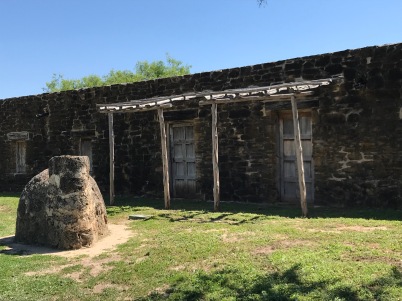 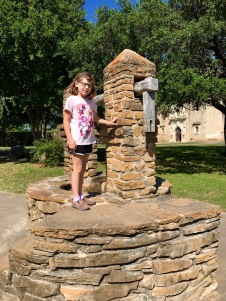 On the other side of the compound lived the next higher up on the social ladder, Spanish merchants hailing from all over the world.  In addition to learning foreign languages and adopting new religious beliefs, the converts were educated on the arts of agriculture and other crafts practiced in the far-reaching corners of the Spanish Empire. Once these skills were mastered and the new citizens baptized, they were turned outside the protection of the mission walls to fend for themselves in this new way of life (and to free up new rooms for the next family).  It was quite an assembly line the Spanish crown developed to further the Empire.

It goes without saying that the focal point for any mission compound is the church, and this one was simple, but lovely on the inside.

I was captivated by the two-story gallery running the length of the building and was surprised to learn that only three religious leaders were in residence here: a priest and two laypeople.

Just beyond the arch on the far right is a personal garden and well.  Apparently there was sharing of neither wells nor veggies with the commoners. !!!  I guess it was good to be at the top of the social ladder.

After our tour, the girls brought their completed Junior Ranger books into the Visitor Center to receive another badge.

More so than the other two, Firebolt was stoked about the Ranger-let tour and she gushed, “I really liked the tour – the Ranger made it all come alive, it was like I was watching a movie in my head.” And then she tentatively added on, “I think maybe I want to be a Ranger.”  High praise indeed. 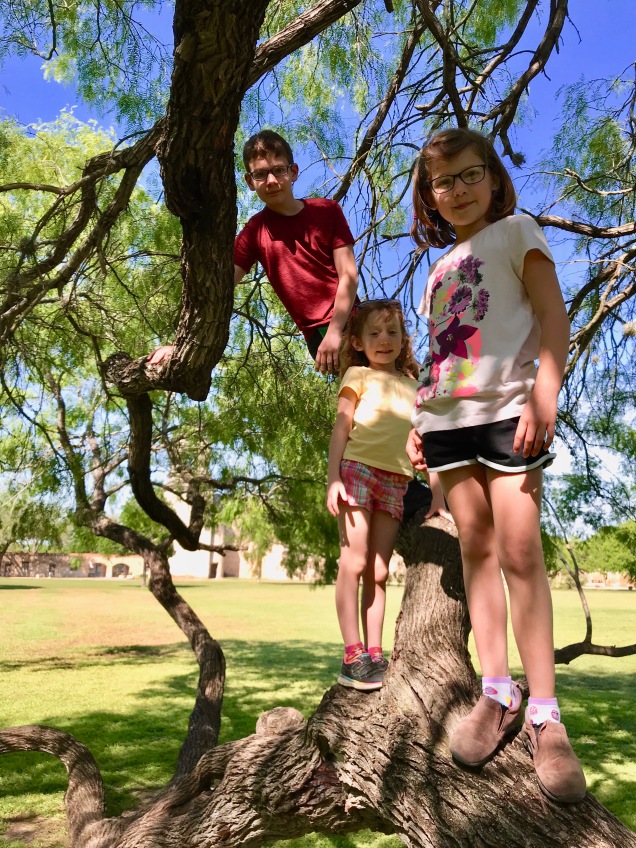 From the San José Mission we headed into downtown proper to see The Alamo.  By then the kids were just about historied-out, so it was okay that we arrived only half an hour before The Alamo closed.  We saw the main museum exhibit, moving through it with a purpose lest we get locked in. 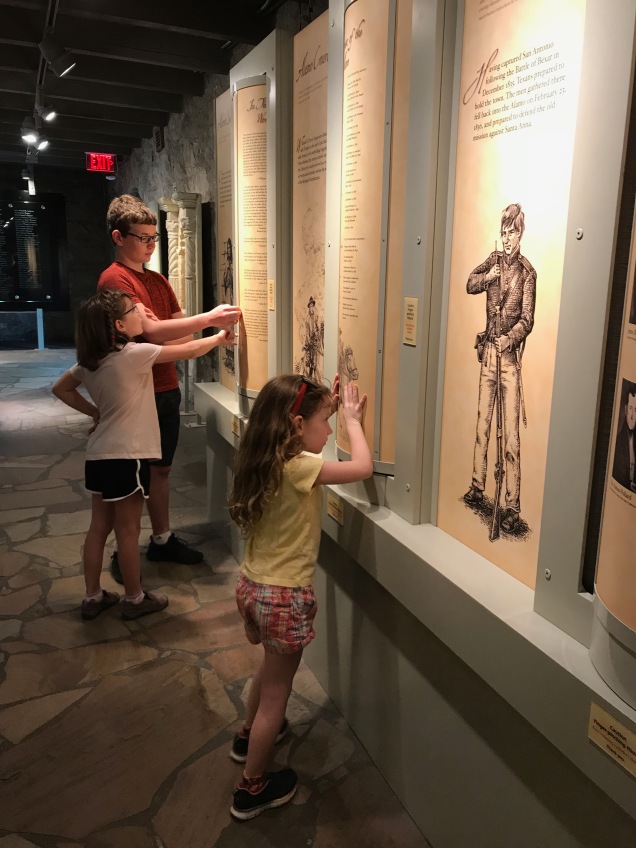 More interesting than the folks involved in or the details surrounding the legendary standoff, our kids couldn’t get enough of the enormous koi, making wishes in the fountain, or trying on coonskin hats. 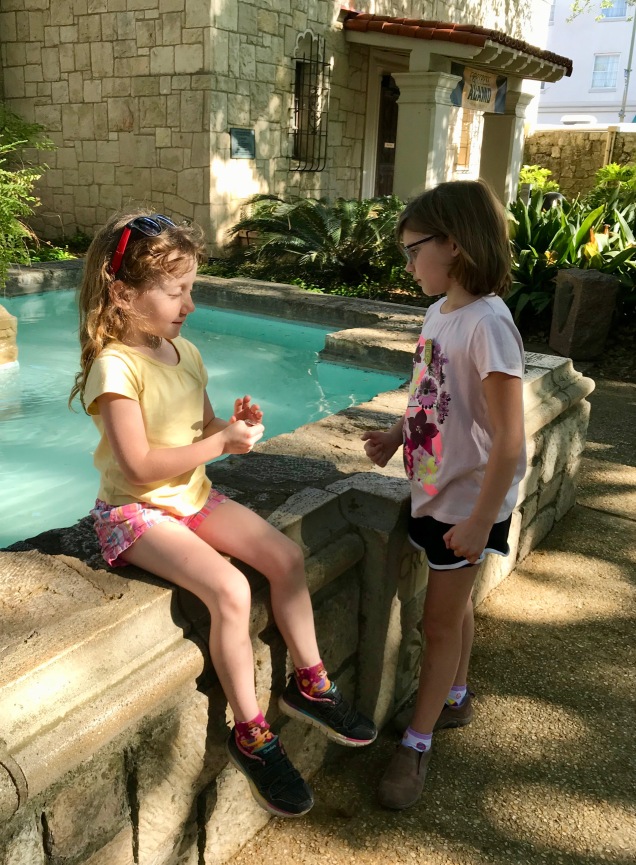 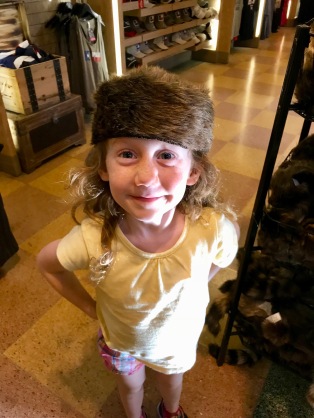 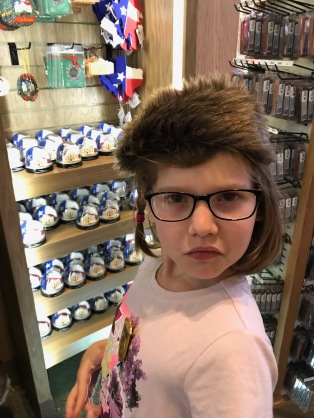 Apparently equally underwhelmed by The Alamo, maybe our kids, too, are all ate up with the Yank?  At least they come by it honestly…

The closing of the Alamo signaled the start of a search for a dinner venue, hopefully located somewhere along the Riverwalk, and we popped into several interesting stores along the way.  Check out the Nacho Libre fans below.

After stopping in a store that must be a cousin to IT’SUGAR where we found scrumptious birthday treats for our cousins, we identified the perfect San Antonio place to eat.

I thought Casa Rio was nothing to write home about, but the kids were thrilled with their dinner choices and gleefully observed, “Mom, they have HORCHATA!” before each ordered some of their favorite beverage. 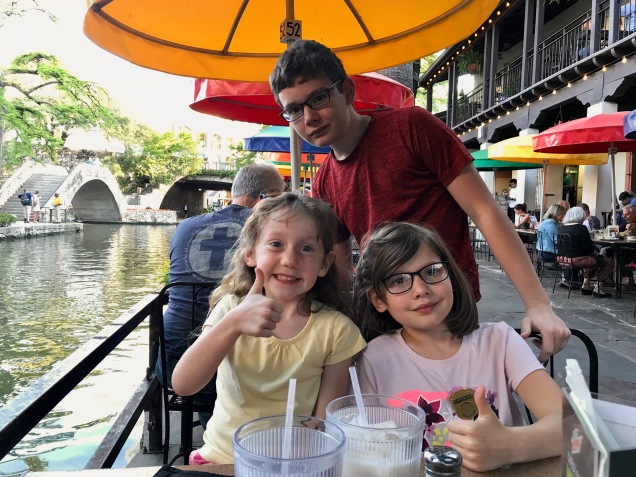 We dined leisurely, watching tour boats cruise by, all aboard delighted by the unfailing smiles and enthusiastic waves from our girls, and then we meandered along the river to see what we could see. 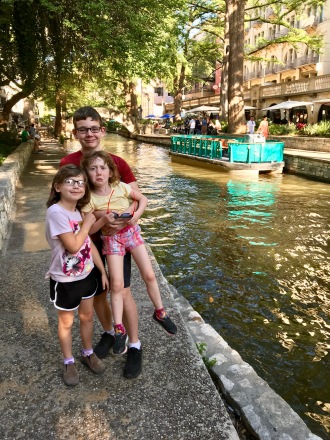 In the waning sunlight, we retraced our steps to the Subaru.  Our drive back to Austin was uneventful and the perfect ending to seeing the best of San Antonio in six hours or less, making for a healthy amble down memory lane.  Not bad for a gaggle of Yanks…