* With Kids     **and the Flagrant Improper Use of Apostrophes

Las Vegas has quite a reputation, one that varies as much as the individuals who add to it with their own impressions of what may or may not have happened in the original Sin City.  Those who do visit will neither confirm nor deny what happens there because that goes against the city’s (relatively) recently established mores.  Since its inception, Las Vegas has been made no less notorious because most of its morphing reputation, however outlandishly you define it, is at least partially true.

Permit me a little history of The Meadows…  Once Salt Lake City and Los Angeles were connected by railroad, Las Vegas evolved from a respectable watering hole into a solid Mormon farming community before it took a moral nosedive.  Advertising to all the puddlers, muckers, and nippers building Hoover the Dam, the city’s local business owners partnered with a few Mafia crime bosses to provide the construction workers places to puddle, muck, and nip off the clock in such fine establishments as initially illegal casinos and disreputable showgirl theaters. Once the hydroelectric monstrosity was complete, tourists seeking recreation on newly created Lake Mead replaced the more ribald clientele and the first upscale hotels broke ground.  Only decades later, in the heyday of the Rat Pack, Las Vegas shared a fallout radius (!!!) with government nuclear warhead testing sites until majorly upping the ante to become its glitzy contemporary self.  Seriously, what other town could get away with offering Atomic Cocktails to sip while watching rising mushroom clouds from nearby nuclear blasts?  (These explosions are best described here by Stephen Colbert)

My last two visits to Vegas were without kids (WOO HOO!).  The first of these excursions was BC (before children) with a group of girlfriends with whom I went to college and was more in line with what I might associate with time on the Strip, to include time at a spa, followed by a Varsity Pub Crawl and then dancing the night away.  My most recent Vegas escapade was with Flight as we celebrated our 6thAnniversary, complete with a helicopter flight into the Grand Canyon for a champagne snack, a Cirque de Soleil show, and plenty of great meals.

Neither trip afforded an appropriate template for kid-friendly activities and I had no idea of what to do there as a family now that nuclear blast observations are no longer an option.

In fact, I was rather befuddled by images I had conjured on what Keeper’s puritan reaction would be to seeing men handing out pictures of mostly naked women on baseball cards, first snapping them against their hands to call attention to their wares before pushing them on the sometimes unsuspecting public.  Not to mention his environmentally conscious self observing the two-block radius from card distribution ground zero that is littered with these images failing to capture a would-be mark’s attention.  Come to think of it, I’m not sure I want my children anywhere near The Strip, certainly not before they reach 21, and probably not even then.

Fortunately, I did not have to rely on my own devices.  Google offered up some excellent recommendations on G-rated activities for our clan to check out. Flight also got some great information from a fellow pilot who lives in the area and I from our cousins who recently moved from Sin City.  Surprisingly, there are plenty of things to do for those uninterested in drinking and gambling.  Who knew?! CNN put together a pretty good list well after our visit and I was glad to see that we saw most of their Top 15 suggestions.  Vegas was hosting the Rock ‘n’ Roll Marathon on our window of opportunity, which maybe helped to offset the standard menu of debauchery.

After a morning of laying low and soaking in the amenities offered at our swanky RV resort (showers and laundry for all my friends!), we made a general scaffold for our night’s entertainment and trundled into town to enjoy a modified evening on the Strip.  The first hurdle was to find parking, made especially challenging by the redirection of traffic due to the marathon.  No kidding, we entered a parking garage through labyrinthian passages typically reserved for employees.  Or maybe Mafia contract killers.  No kidding, it was not until we popped out in a more official-looking casino parking garage that I thought our night on the Strip might not be going horribly wrong after all.

Shaking off that odd (although maybe perfectly Vegas) introduction to our evening, we got moving and steps into our stroll, we wandered into the Wynn to see their latest floral display. 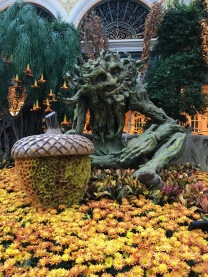 I’m still not quite quite sure what the theme was, maybe Peacocks Meet the Hobbit in Autumn, but all I could think was “’Curiouser and Curiouser’ said Alice.”  I suppose that’s par for the course for Vegas where over-the-top is the norm.

Not to be outdone by the Wynn, we meandered through the Forum Shops at Caesars Palace (shouldn’t there by an apostrophe in there somewhere?) and paused for a photo op in front of the knock off Trevi Fountain. 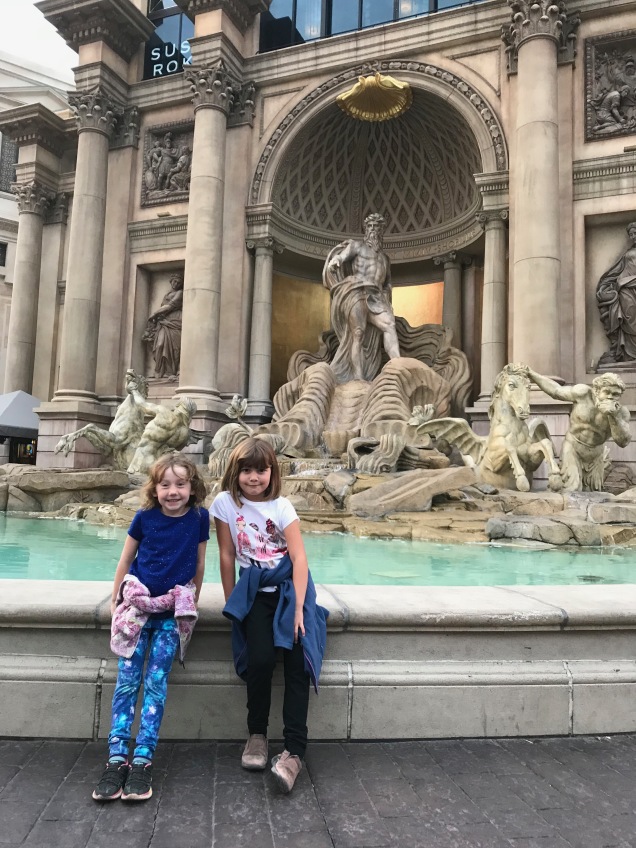 Flight and I concur that we prefer the original in Roma, but it’s not bad for a copy in a relatively newly populated desert.  We then bolted through the casino to get to the other side.  Despite our moving at a fast clip, Firebolt especially was captivated by the whirring and flashing lights associated with the ding-ding-ding of the slot machines and had to be led by hand to keep up. Yikes.  That’s all I have to say about that…

Although we didn’t make it all the way down to the Bellagio to see the water fountains dancing, we did catch this more modest display before we went into the Grand Canal Shops on our way to the Venetian.

The highlight for our kids was IT’SUGAR (again with a jacked up apostrophe – Vegas, what gives?!).

Don’t let their expressions fool you, our kids wanted to drop a load of cash in that store.  There were plenty of unusual treats to catch one’s attention, good or bad. 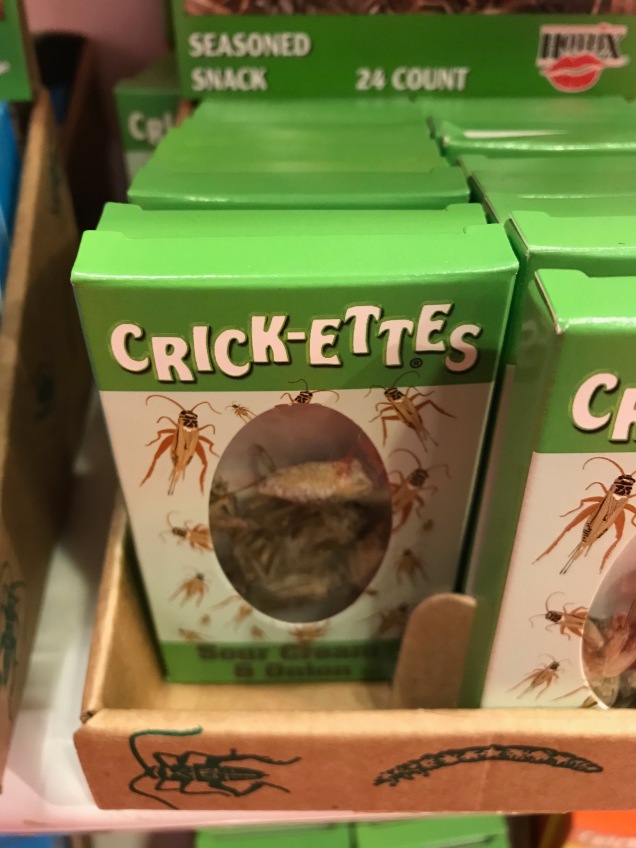 However, as we hadn’t played Craps, Blackjack, or even hit the slots successfully or otherwise, we told the kids they had to rely on their own funds, which maybe that explains their above dour faces.

Around the corner we found a chocolatier, ROYCE’ (sic).  While the confections were divine (after sampling, we bought some to take with us), I still don’t get what the superfluous apostrophe is all about. It’s true, I do own this t-shirt:

Our rumbling bellies determined our next course of action and we found ourselves down the Linq Promenade in search of dinner.  As soon as the kids saw “Pizza” on the menu at Barley and Flour, they proclaimed being near starvation and intended to move no farther.  Fortunately, that restaurant was a good call and we were entertained by the Promenade’s light and music show while we awaited our order.  After refueling we headed back the other direction in search of the Subaru. 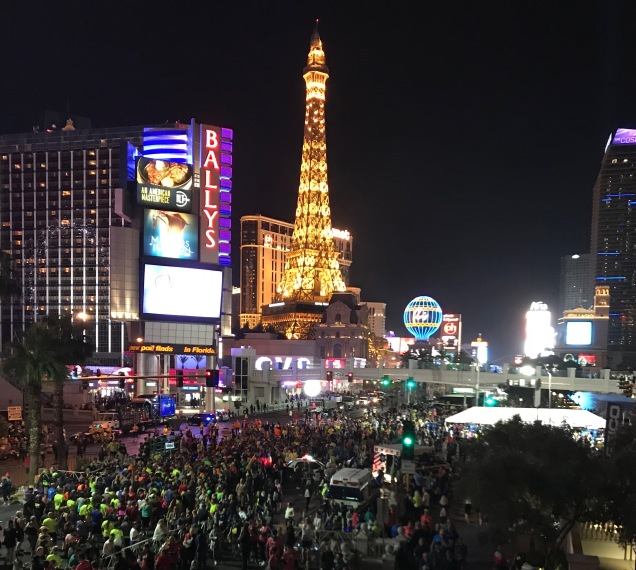 Satisfied we had checked all the necessary boxes of appropriately seeing the Strip with kids and fresh with watching the first marathoners cross the finish line, Flight and I mused about running a race together.  I surprised both of us when I was the one who suggested the crazy notion.  I haven’t run a race since completing the Marine Corps Marathon in 1992 and Flight’s most recent was the Vancouver Half-Marathon in 2008. Even as the tentative words were emerging from my mouth, my body screamed at me to stop the nonsense.  Or maybe that response was owed to the cupcake sampling at Sprinkles after our solid dose of flour and barley at dinner. Either way, it looks like we’re thinking about possibly training for a race (see how noncommittal I made that sound), almost certainly a short one at that, but who knows…