This will be quick.

Not to say I didn’t enjoy our Johnson Space Center tour in Houston, I did.  It was a bit crowded, but that’s to be expected on a weekend.  I learned a few things, too.  I hadn’t realized that we (as in we, the USA) were fully engaged in an eventual mission to Mars.  Learning about how that’s planned and being fleshed out was fascinating.  It was also entertaining to watch the kids get wrapped up in Apollo 13 and have them seeking out the pictures of the various astronauts whose actor counterparts they gravitated to in the movie.  I had wanted to watch The Right Stuff with Keeper in order to round out that period of our history before we moved on to other things, but it’s a three hour movie, and uninterrupted three hour chunks of time that don’t involve sleep are almost as tricky to come by on the road as they are at home.

Two more things stood out for me at NASA.

Firstly, that Saturn rocket is enormous.  I mean, absolutely massive.  The engineering involved with not only guiding that thing into space, but keeping it from tearing itself apart under the forces involved is mind-boggling.  Secondly, the Mercury-Redstone rocket is tiny!  I picture the scene (from The Right Stuff) of Alan Shepherd sitting in his capsule at the top of it, first wetting his spacesuit and then telling them to “fix [their] little problems and light this candle!” and I imagined another massive rocket.  It’s not.

It’s not that much taller than a telephone pole.  For some reason that struck me too – the idea of riding this little Mazda Miata of a rocket into space. (My dad’s quote on Miatas upon first in-person viewing: “That looks like you should have one for each foot!”)

The kids enjoyed the tour as well.  No new astronaut candidates in the group, but I do think Firebolt took to the idea of working on the engineering / mission control side of things.  She’s great that way – she has added at least three or four more future career paths on this trip to her already impressive list of “things she’s gonna do” (teacher, soccer player, “science person,” and president of the USA, just to name a few).

Otherwise Tacco covered Houston well, and I don’t have anything to add, other than the fact that it, too, is massive.  Most reasonably large cities that aren’t geographically constrained tend to have a major interstate or two that run through the middle of them and then another that rings around the metro area.  Houston has four such concentric rings.

Heading from the west side to the southeast side of the metro area, we managed to spend a solid hour and a half on one of these rings in heavy, lane-weaving traffic (not at all fun in Davista), never once seeing anything that looked like a city off in the distance to our left, as it remained too distant in the haze.  I’ve determined that I prefer the 2-to-4 lane secondary roads to interstates, and if I absolutely need to drive through a city, I want to do it either with the car and RV disconnected, or in the middle of the night.

And then we arrived here. 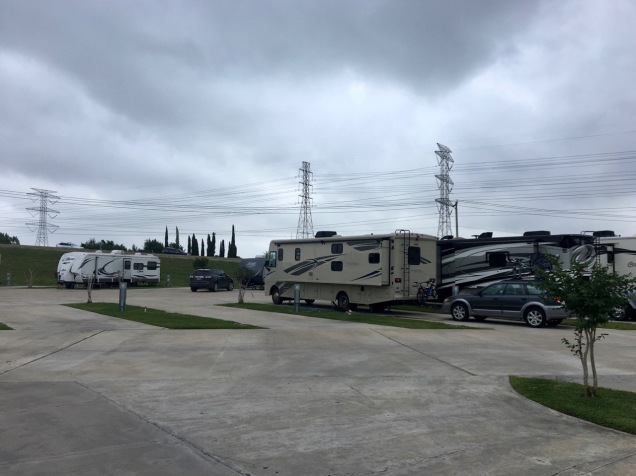 I had done considerable research before booking here, and of the many “RV parks” in the area, this had the best reviews.  Parking lot, busy highways on two sides, power lines… there ya go.  At least it wasn’t hot and humid yet.

All good though, we had only planned this to be a quick stopover on the way to New Orleans, and for that it more than served its purpose.

One thought on “No Problem”