Asheville, NC, holds a dear place in my heart for many reasons.  First and foremost, it was one our first “destinations” after we acquired Davista in Cincinnati last April and will always serve as the backdrop for my fond memories of getting to know our rig as we started this crazy adventure. Prior to visiting Asheville, everyone I knew thought my crunchy self would be right at home there and told me I probably wouldn’t want to leave.  Apparently I exude granola.

Actually, early in our marriage, I tentatively confided to Flight (after doing a clearing turn to see who might be listening), “I think I might be a little crunchy.”  With an incredulous look, he laughed and simply said, “You’ve been in granola denial for a very long time – you just need to embrace it.”  “Really?!” “Yes, really.”

And so I have.

Strangely, despite embracing this latent aspect of being, I did not readily find my peeps during our first visit to Asheville. Instead it seemed I found my granola limit, which I didn’t even know I had.  Now, I am all about living a life being mindful about the rest of my fellow creatures on this planet and our collective home.  In fact, that philosophy informs many of our family’s decisions, be they existential or mundane.  What I’m not particularly fond of is those who use something akin to this mindfulness as an excuse to abstain from being contributing members of society. “I can’t get a job because it will interfere with my ability to commune with….” That mentality makes me crazy and Asheville seemed thick with it.  Flight was surprised at my reaction to Asheville and thought I might start yelling, “Hippie, take a bath!” at the many such folks I saw loitering while we were out and about. Interesting.  I couldn’t help but wonder – am I getting old?!

Nope.  Not happening.  I refuse.  Crotchety, maybe.  Old? Never. Actually, that reminds me of another pretty funny conversation Flight and I had, this one while still living in Maryland.  While I was still teaching at the Naval Academy, Flight would patiently listen to any of my rants about the current episode of “Midshipmen Behaving Badly” I was witnessing at work,  and wait until I was done before grinning and saying, “And while you’re at it, GET OFF OF MY LAWN!”  I enjoy returning the favor when he relates any reality show-worthy shenanigans from 36,000’.  After one such particular venting, I impishly observed, “You know, I think we’re both getting a little crotchety, but in different ways.”  Not missing a beat, Flight fired back, “Yeah, we are, but that’s because we have different crotches.”

So there ya go.

With all that said, I was a little apprehensive about what hippy factions we might encounter on our return to Asheville, not so much for their fanciful existence but for the potential of my crotchety reaction thereto.  Fortunately (?), I was distracted by the repercussions of our crew’s inability to follow checklists, which made our time in Asheville proper virtually nonexistent.

Despite being limited by self-induced mechanical failures and the consequent repairs, we did manage to return to two highlights from our first visit.   Sliding Rock was one of our family’s favorite activities last year.  River water has sculpted the smooth rock into a long slide that has become a local draw for generations.  Since we were there again early in the season, pre-season if you will, the public restrooms were closed and the water was rather, um, brisk.  Content with my memories from last year, I abstained from the sliding activities but caught some decent shots of the family.

From Sliding Rock we then went to the Sierra Nevada Brewery to spend an early evening enjoying some “Corn in the Hole” (WoodSprite’s title for the game) and walking the extensive garden before we dined within.

It was a lovely day. 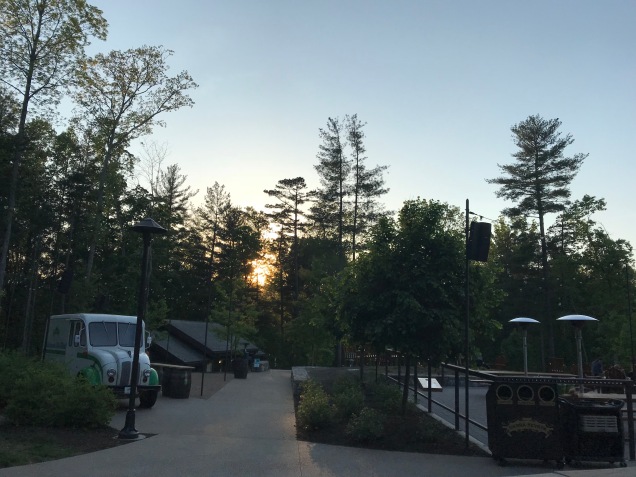 Just before we collected the car from the miracle mechanic, we drove out to Black Mountain to see what that not-so-booming metropolis was all about. I was curious about this particular town as it was the setting for two very different series of books that I have thoroughly enjoyed.  The first of these is Diana Gabaldon’s Outlander series, which is now a series on Starz.  The last part of the fourth book (The Drums of Autumn) and the first part of the fifth book (The Fiery Cross), which I happened to be rereading now, is a Scottish clan gathering set in Black Mountain.

The other series is a trilogy by William Forstchen that explores what might happen in the event a nuclear device (or several) is detonated in space specifically to generate a massive electromagnetic pulse (EMP) to fry electronics across a sizable footprint.  For those of you not associated with the Space Cadre, this is actually a big deal. The ramifications of detonating such a device are not what you (and Stephen Colbert) might think (radiation fall out, scorched earth, etc.).  Instead of nuclear holocaust unfolding on Earth, everything dependent on 1s and 0s would cease to function, becoming only conversation pieces and paperweights, to include the satellite network that informs most of the developed world’s communications and defense networks.  In a word, YIKES.  The series is set in Black Mountain and is a solid contemplation on how all might unfold should such an event occur.   After finishing Forstchen’s books, I again gave thanks that I know how to grow my own food and have at least one skill I can barter.

As excited as I was to leisurely stroll about Black Mountain and reconstruct scenes from these books in my mind’s eye, I was also acutely aware that additional time in the Subaru never serves our flight well.  We opted to dine at Louise’s Kitchen (which is well known for its enormous breakfast dishes) before seeking out Montreat College (which, sadly, we only caught a glimpse of), do a 180oand head back to Davista.  We made it in plenty of time to get a serious fire going, and followed up with S’Mores.

Safety Standdown complete and no hippy sightings, I was eager to get to our next destination (with the Subaru parking brake appropriately released) and explore the Great Smoky Mountains.  I have never seen this neck of the Appalachians and can’t wait to see what they’re all about…