I had never been this deep into Appalachia before, nor had I ever seen The Great Smoky Mountains.  In fact, I had never even contemplated why these gentle (gentile?) mountains have this name. It turns out “Smoky” has nothing to do with the ever-vigilant bear who encourages us to prevent forest fires (that particular cub lived in New Mexico) as only the uninitiated might assume. Instead, the name comes from ubiquitous blue vapor that continuously escapes the thick layer of lush vegetation on these mountains.  Before the native Cherokee were forced to relocate to Oklahoma along the devastating Trail of Tears, they called this range “Shaconage” or “place of blue smoke.”

As we were driving about the countryside, I became very aware of the heavy influence of the Cherokee Nation along the North Carolina boundary of Great Smoky Mountain National Park. I have traveled far and wide through North Africa, Europe, the Caribbean, and Southeast Asia, and nowhere have I been so intrigued by a written language.  At first glance, I could not even establish a rhythm to the language and it was no surprise to learn that in WWI the Cherokee were enlisted to serve as our nations first “Code Talkers,” just as the Navajo had done so successfully in WWII.

Although it may seem entirely out of place, I think it’s important to give a quick homeschool update before I can get to a more extensive summary of that enterprise. While the girls have been ardently earning Junior Ranger Badges at all the National Park Service (NPS) sites we have visited, these exercises were well beneath Keeper’s attention and interest level.  To help him get the most out of our visits, I delved into the extensive curricula offerings on the NPS website that has by location and subject matter a wide array of options for “Teaching With Historic Places.”

Entirely applicable to our visit to the Great Smoky Mountains, Keeper spent a week doing readings and answering questions about the Trail of Tears.  In putting together this assignment, I learned that most but not all the Cherokee were forced to relocate west of the Mississippi.  The vibrant community in this neck of North Carolina is made up of either the descendants of those forced out to Oklahoma who then walked back to their homeland or those who were able to hang onto their property despite the land grab of the early 1800s.  I would have liked to spend more time exploring the nearby town of Cherokee, but our short stay didn’t allow for such an excursion. Next time.

The only real time I have spent along the Appalachian Trail was about a week over 20 years ago and I was entirely distracted by other goings on.  I had the privilege of attending SERE School in Brunswick, Maine, before reporting to my squadron in Whidbey Island, Washington.  Survival, Evasion, Resistance, and Escape training teaches you to do exactly that.  After a few days of all-day lectures, you spend your first stretch of training learning how to live off the land.  Next you practice evading capture in hostile territory.  Then, even if you were able to stealthily avoid capture, they call “Ollie Ollie Oxen Free” (actually they ring a bell) and you have to report for capture.  Finally comes the trickiest part – learning how to resist interrogation as a prisoner of war (POW), all the while trying to plan an effective escape.

It was 22obelow zero our first night on the mountain and I remember crawling into my little self-made snow cave and praying that I might still be alive in the morning.  SERE School was, by far, the most valuable training I have ever had, I just pray I never have to use it.

While in the classroom portion of SERE School, we were instructed how to harvest berries, none of which would be in season until June (if memory serves, most of the red ones and all of the white ones will kill you), and to not eat snow, yellow or otherwise (you need to heat it up and turn it into water first or it will kill you). During training breaks we also heard some pretty entertaining stories of previous classes’ shenanigans and learned that, on occasion, hikers either finishing up or starting their long trek along the Appalachian Trail will stumble into the mock-up POW camp.  Having been deeply entrenched in that military experience, I cannot imagine what a rude awakening that might be for the average hiker.

It was these reminiscent thoughts that were keeping me entertained as we crisscrossed the Appalachian Trail during our first hike to Clingmans Dome and back.

On our trek to the observation tower we saw a sleuth of bears (betcha didn’t know that’s what more than one is called – I had to look it up), which you have to take my word for their presence in the brush.

The walk to the top of the observation tower was crowded (note to self, avoid the weekend crowds in the future…), but led to some breathtaking views.

I was surprised to see Cold Mountain listed among the peaks, a location made famous by a heart-wrenching movie made based on Charles Frazier’s historical novel. 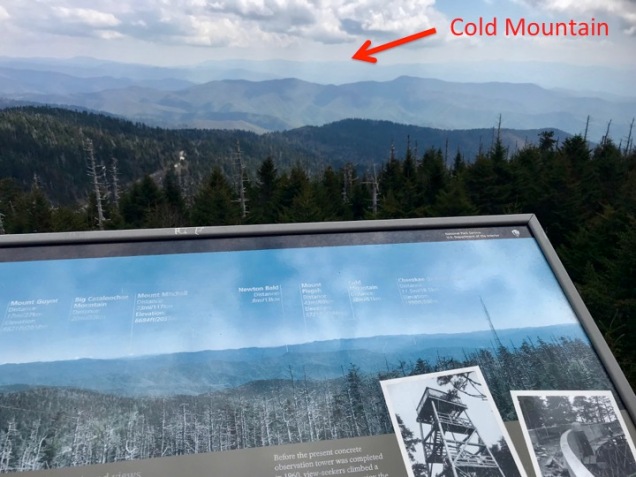 After the 360oview offered at the top of the tower, we ducked into the forest proper to follow the Appalachian Trail for a very modest distance to find a picnic spot.

As we meandered through the woods, I realized we were on a “Clingmans Dome Bypass” for folks who are hiking the Appalachian Trail in earnest and don’t want to be bothered by the throng of tourists.  We ran into a few such hikers looking none the worse for their travels and I thought of my cousin who has hiked both the Appalachian and the Pacific Crest Trails in their entirety, leaving only the Continental Divide to go before she earns the coveted Triple Crown title.  !!!  After a short stretch, we were happy to come across this beautiful setting for our lunch.

We returned to the car and were rewarded with another sleuth sighting when we wound our way down the mountain.

One last stop before returning to Davista was to check out Mingus Mill, a historic and still active grist mill.  Instead of using a water wheel to do the work, Mingus Mill uses a water-powered turbine that had diverted the flow of the river to harness its energy to grind grains.  At first glance, I had originally thought this was a rather inefficient planter outside, but quickly realized it was one of the original millstones.  !!!

With two of the major sites seen, we settled into Davista to enjoy dinner by the river.

The next morning dawned on Mother’s Day.  My family made a wonderful breakfast and we set out to explore another of the local hikes, and possibly float the falls’ source, Deep Creek.

Although we had our share of inertia getting away from Davista, the kids settled into the hike after minimal grumbling (it was Mother’s Day, after all) and we hit a potential snag in our plans.  WoodSprite was bitten by a nasty bug that left a ghastly welt in its wake.

As we loaded up the backpack departing the car, I had heard the Angel’s recommendation to be sure to bring our stash of lavender oil, which, shamefully, I disregarded.  Lavender oil is our go to for any bug bites as it immediately takes the sting away.   All I had on hand was Band-Aids and homemade lip balm.  After convincing a tear-stained WoodSprite that lip balm was merely peppermint salve for the lips, I was able to apply it to the sting site and, much to everyone’s relief, it mitigated the pain shortly thereafter.

While I was carrying and soothing a crying WoodSprite along the waterfall path, Flight told us all to stop and back up.  I had heard nothing but the shedding of tears, but when we paused heard several somethings stumbling through the nearby brush.  With yesterday’s sleuth sightings in mind, I had expected Papa, Mama, and Baby Bear to come lumbering into view.  Instead we were favored with a drove of wild boar dashing across the trail no more than ten yards ahead of us, including three wee piglets.

Distracted by the cute factor of wild piglets and the sting’s hold fading by the moment, WoodSprite was happy to walk on her own power.  Big brother, Keeper, took WoodSprite by the hand and helped her navigate the way ahead.  Almost as sweet as seeing wild squealing piglets dashing through the woods…

At last we found what Flight had been seeking throughout our waterfall hike, a suitable place from which he could dunk his head in the stream.

I don’t get it, but Keeper and WoodSprite do, as they usually join in…

Following our hike, we reposed for a moment by Deep Creek and weighed the options for the afternoon’s water activities.  We first contemplated renting some tubes at one of the many nearby shops to float, but, even after witnessing some very creative logistics of other tubing enthusiasts, we couldn’t envision a safe configuration that might allow us to get five tubes (and us) from shop to parking lot in the Subaru and then on foot to the put in place. Instead, we opted to return to the campground and play in the river.

Keeper was stoked to engage in varsity waterplay with his sisters and Dad and I stayed outside the spray radius to document it all. 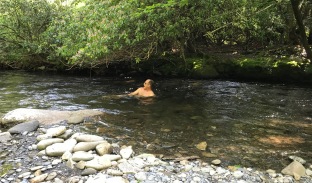 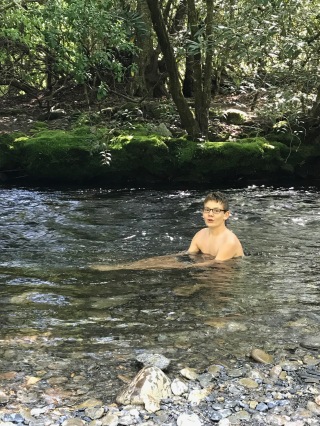 Another delightful day nestled in the Great Smoky Mountains came to a satisfying conclusion with s’mores around the campfire.

Before we left the next morning, WoodSprite and I went for a short hike along a nearby nature trail. Throughout our travels, Flight and I have made it a point to carve out one-on-one time with each of the kids and I was delighted to have the opportunity to hike with WoodSprite, just the two of us.  We had to cross three modified planks to get started and found a wee turtle on our way around the loop. 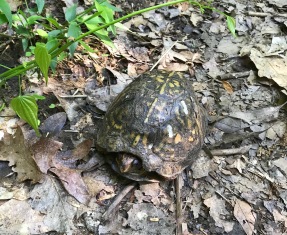 The last activity before we scooted on to Atlanta was returning to the Oconaluftee (that’s pretty fun to say) Visitor Center so our newest Junior Rangers could be sworn in. 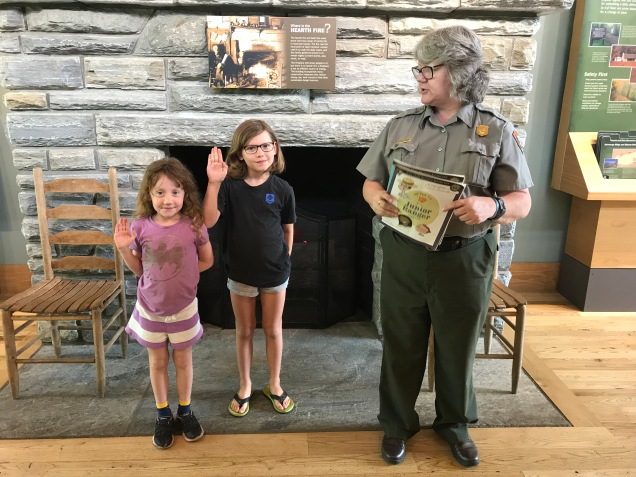 Sadly, we didn’t make it around back to see the living farm museum, but we were okay with that omission. Having seen many of the spectacular National Parks out West, I was surprised to learn that the Great Smoky Mountains is the most visited NP in the nation, boasting over 10 million visitors annually, but then discovered that it’s within a day and half’s drive for over half the American population.  I also realized that these gentile mountain slopes are far more accommodating for people who may not be avid outdoor enthusiasts.  After hearing all the rave reviews of this particular National Park, I was very glad we made the opportunity to check it out.  Although it was lovely to see, and I can certainly see its appeal, my heart yearns to return to the west to view the newer crags and sharper peaks of the Cascades.  They are calling me home.

One thought on “Sleuthing Sleuths and Driving Droves in Shaconage”