Had you asked me before our trip which was the most visited national park in the country, I would have stalled with “that’s a really good question,” and then mentally shuffled through about a half dozen parks, trying to figure out which one would be the most popular and why.  Yellowstone and Yosemite would be in there, probably the Grand Canyon too.  And eventually I would’ve given the wrong answer, because I hadn’t even considered the actual most visited park, which is Great Smoky Mountains, spanning the border of eastern North Carolina and western Tennessee.

And here I thought I was pretty good with geography and stuff.

I can tell you that this surprised me, for several reasons, most of which I’ll hopefully flesh out in this post.  It also created some high and likely unfair expectations for our visit.  Having grown up with Yosemite, Sequoia, and the Grand Canyon, and having recently visited Yellowstone, Grand Teton, and Zion, I guess I subconsciously expected that sort of grandeur out of a park that was “number one” above those others.  When in truth I now suspect that its number one status has much more to do with ratio of people to national parks in that part of the country, combined with accessibility.

To be clear, it is a beautiful place.  The Appalachians in that region reach 6,000’-plus, and combined with the lushness of that area of the county, you get an incredible variety of biomes within a very small area, with the attendant diversity of flora and fauna.  Crystal clear streams are abundant, and seeing black bear wandering through the trees and lazily gnawing on berries is almost a certainty.  We saw and greatly appreciated all these things.  And yet after a few days, we decided that we’d seen much of what the park had to offer, and rejiggered our schedule to leave a day early for Atlanta. 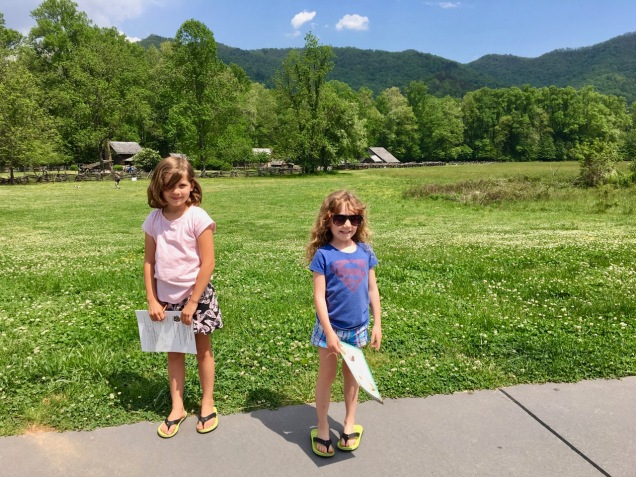 First, though, the drive.  The Blue Ridge Parkway’s southern terminus is in the park, and it passes just south of Asheville, about two miles from where we camped.  We could easily have simply taken the Blue Ridge all the way from Asheville to GSM, and I was tempted to, just to say we had.  Fortunately I resisted that temptation though, as it would have at least doubled the driving time, and “easy” is not the proper adjective for driving a fully loaded motorhome towing a car though narrow, winding mountain roads for four hours.  I think the novelty would’ve worn off after about 45 minutes, and I’d have been left with four carsick family members and some shot nerves from all the precarious curves, drop-offs, and tunnels.  We took the highway instead, followed by a secondary road that brought us to the town of Cherokee, at the park’s southern border. 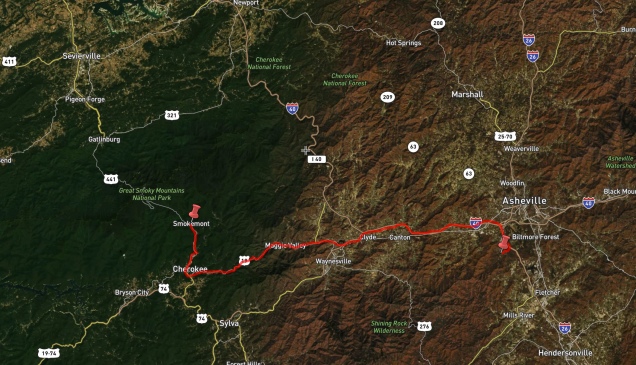 While Cherokee is reservation land and has the bilingual signage to prove it (side note: have you ever seen written Cherokee?? 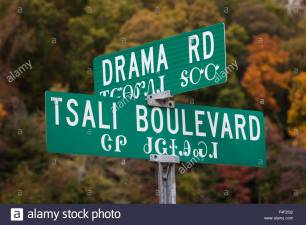 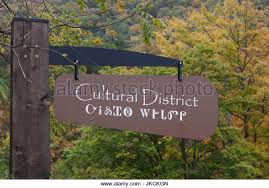 It’s somehow more confusing than Chinese or Arabic or Hindi because at first glance it looks just close enough to something familiar to make you believe that you can, or should, be able to understand it.  But you can’t.  You definitely can’t.), the vast majority of the Cherokee people were driven out of the area in the early to mid 1800s.  The story of the Trail of Tears, which I had heretofore only had a vague knowledge of, was both heartbreaking and fascinating.  I was encouraged by Firebolt sharing both my view and my interest in the subject.  She has become an even more voracious reader on this trip, and one of her favorite stories of late tells about a fictional Native American girl who is separated from her friends and family but is able to, over many years, make her way back to them.  So reading tidbits of some actual stories really struck home with her.

I had tried to make reservations at the Smokemont campground, which is the main campground within the park on the North Carolina side.  Surprised to find that sites were not reservable until the week after we would be there, I steeled myself to scrap over the first-come-first-served sites with the throngs of visitors.  Wrong once again – as it turns out, there really is a significant off season in GSM and even with mid-May’s perfect weather, we had the campground more or less to ourselves.  We chose a site right across from the gurgling stream, in hopes that we’d be able to leave some of the windows open and have its sound lull us to sleep. 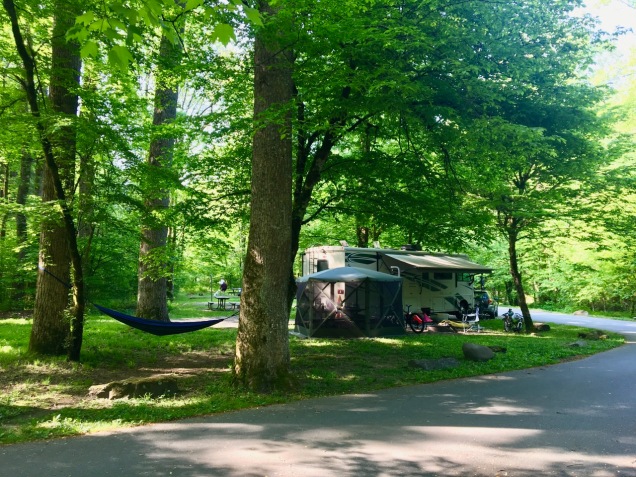 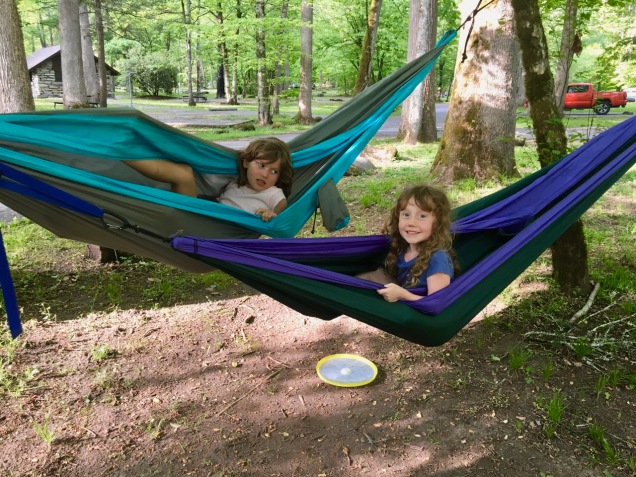 The stream bed also made for a perfect wandering area, with the best skipping rocks I had ever seen. 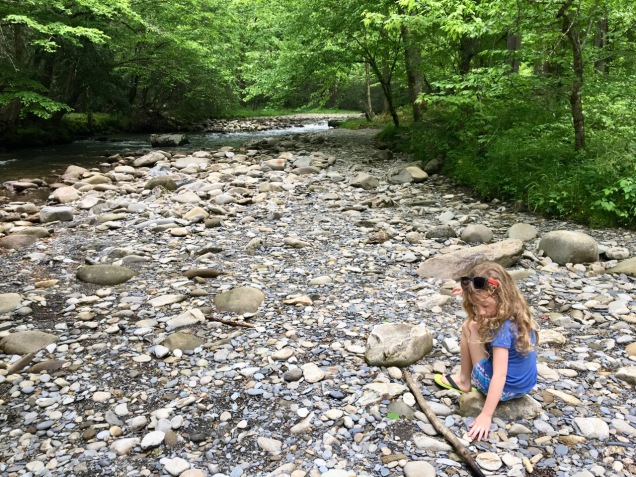 The girls were less happy about the millipedes, but I thought they were cool. 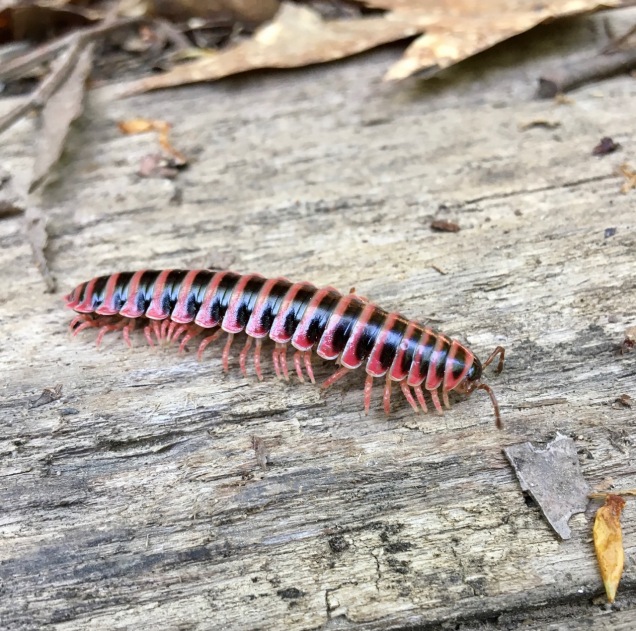 We opted to drive up to the top of the park on our first full day, figuring we could do some hiking and see a bit more of what’s around.  It was my first real exposure to Appalachian terminology for some of the mountain features I had thought I was already familiar with.  “Balds” for instance.  There are quite a few “balds” on the tops of the mountains in GSM.  What I assumed they were were areas above the tree line.  Not so – they are treeless areas covered in grass, but they’re not technically too high to support tree growth.  I’ve read that there’s actually no consensus on why trees grow on some Appalachian peaks and not others, which is interesting.  I’d have thought that question would have a pretty straightforward answer.  “Domes” are another.  When we heard that we should visit Clingmans Dome, which is the highest point in the park, I pictured Yosemite’s granite behemoths.  At 6,643’ it’s pretty impressive, elevation-wise, at least for the eastern half of the country, but there was no granite to be seen up there, and not much to distinguish it from the other peaks in the area, other than a vaguely Jetsons-looking concrete observation tower at the top. 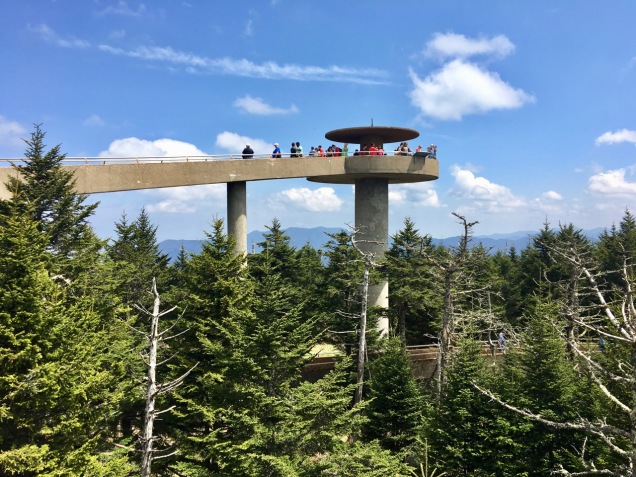 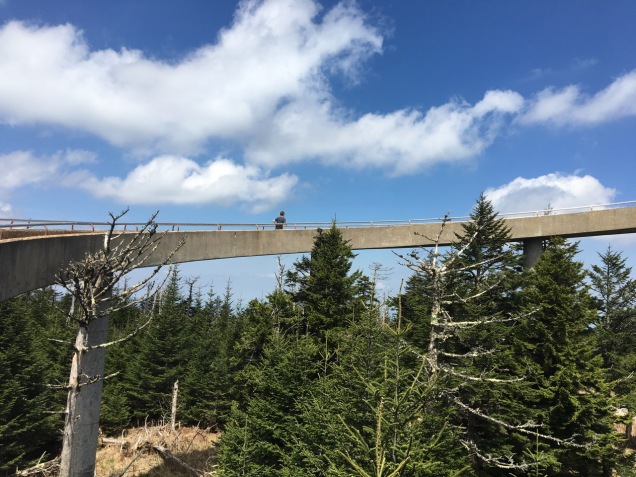 The view was nice, if not breathtaking, [Late edit: I just re-read Tacco’s post and saw that she did indeed call the view “breathtaking.”  I guess some breath was taken away, just not mine] with the interpretive signs describing what you’re seeing also devoting significant verbiage to air pollution and the likelihood that you wouldn’t be able to see things too far away because of it. 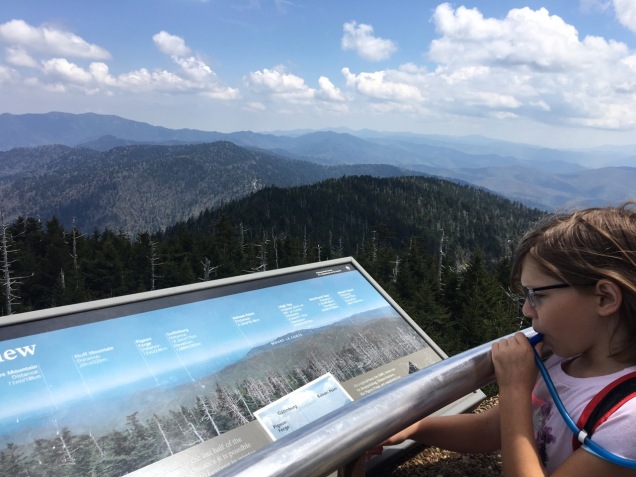 We did, however, see a few black bears during the hike up and on the drive down.  Not quite as imposing (and traffic-clogging) as Yellowstone’s bison, but cool to see. 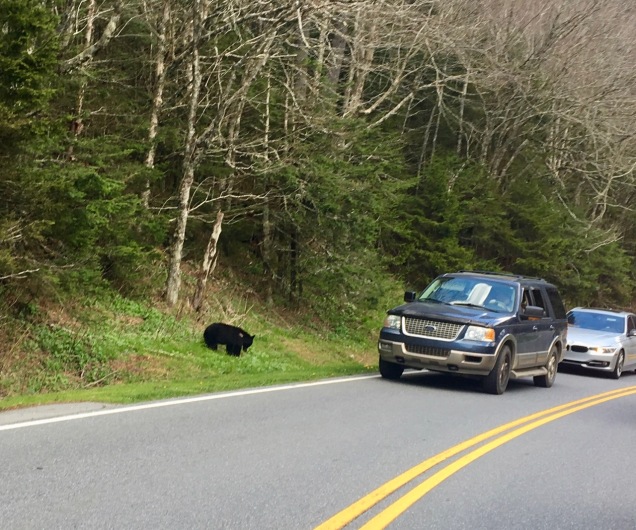 As the Appalachian Trail follows the spine of the mountains in GSM, which is incidentally also the Tennessee / North Carolina border, we figured we would hike a bit of it in search of a suitable picnic lunch area, just to say we did.  Again, not the most impressive trail we had seen.  It just sort of meandered through the trees a bit, with the occasional view of the other mountains.  It was a nice picnic though, and off we went back to our site. 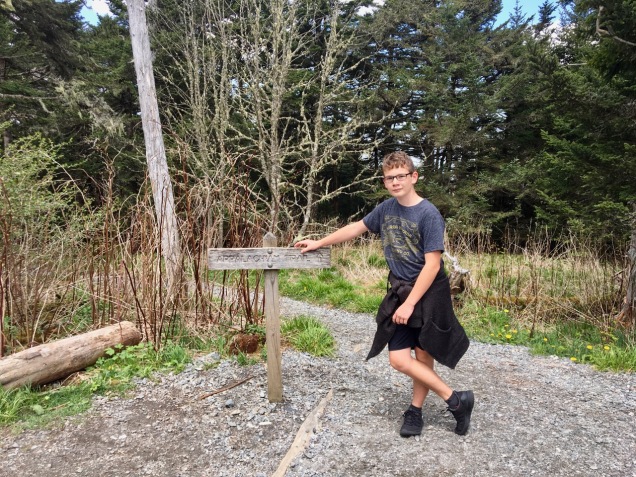 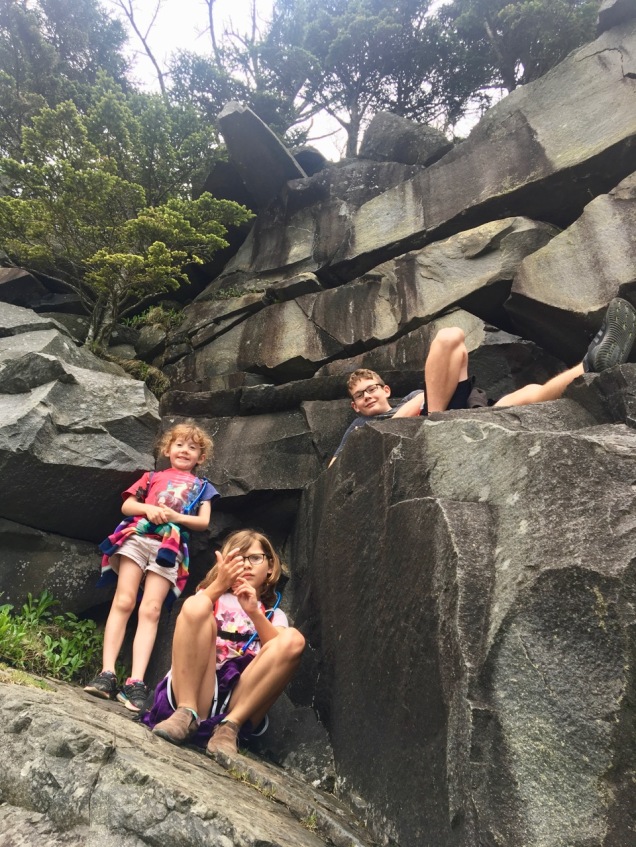 The following day was also Mother’s Day, so Tacco had her choice of activities after the kiddos presented her with the gifts they had bought / made for her. 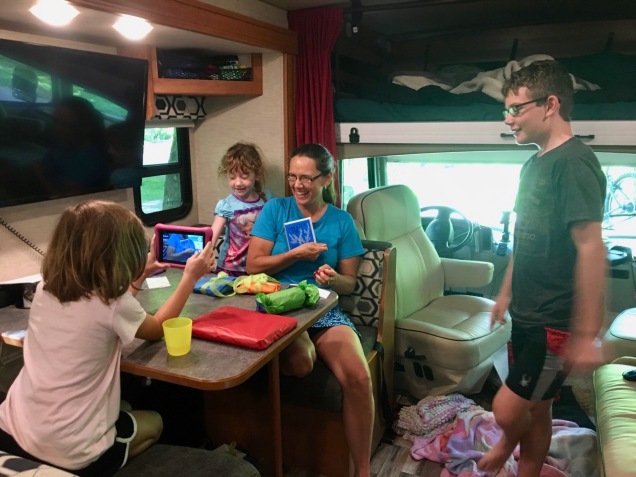 The weather took a turn toward summer heat as well, which is tricky when you’re dry camping (i.e. no hookups), since you need the generator running to fire up the air conditioner, and national parks in particular are quite strict on their generator policies.  Having just written that it strikes me as sounding ridiculously soft – “The horror!  We’re camping and we can’t run our a/c!” – but I have to remind you, and we often need to remind ourselves, that this is our home, not a weekend campsite, so we tend to cut ourselves a little slack when it comes to wanting some creature comforts.  Where I was going with that, though, is that with the hot and sticky creeping up, we decided to try to get into a river at some point during the day.

That translated to a waterfall hike just outside of nearby Bryson City (which is a very cool little town, incidentally), followed hopefully by a float down the Tuckasegee or Oconaluftee river.  Love those names. 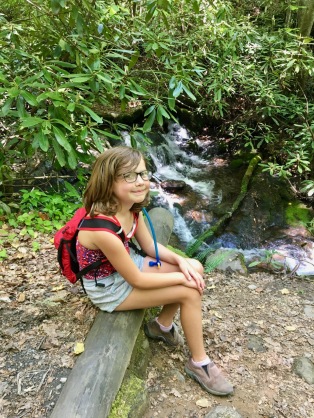 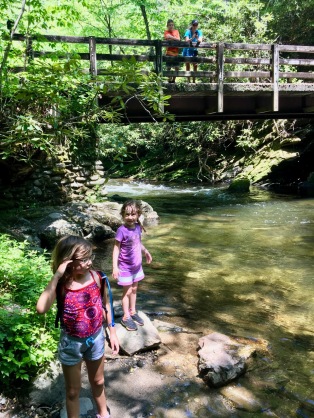 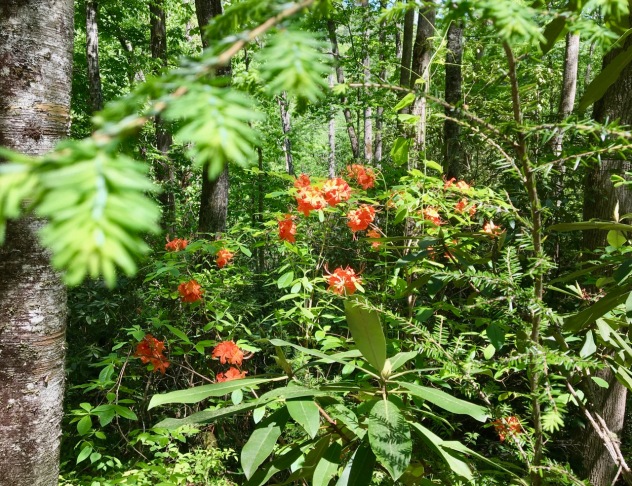 The hike was short but sweet, other than Woodsprite’s getting stung by a bee.  Lots of flowers.  Tacco mentioned the wild boar stampede, that was an eye-opener, and a new experience for all of us.  We also got to see Juney Whank falls.  Juney Whank??  Hm.  OK. 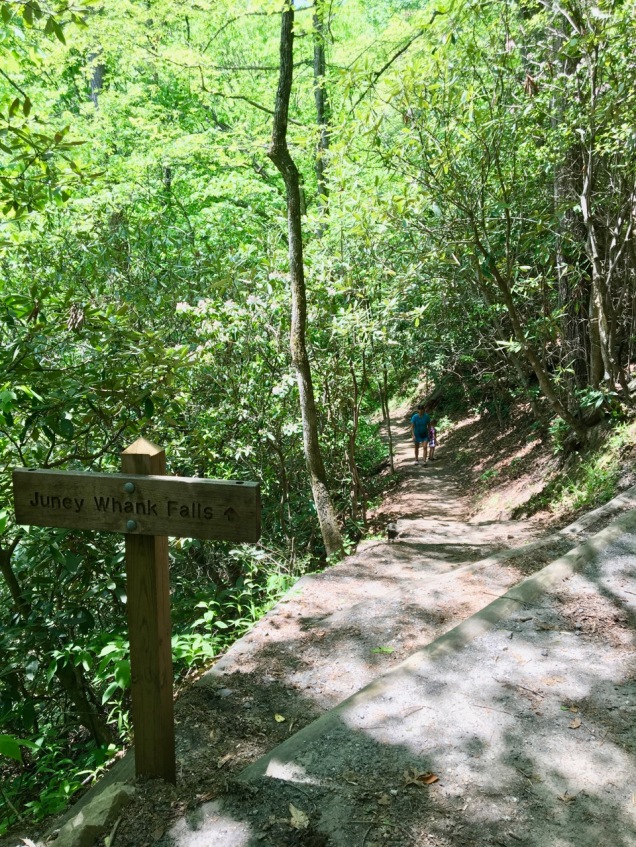 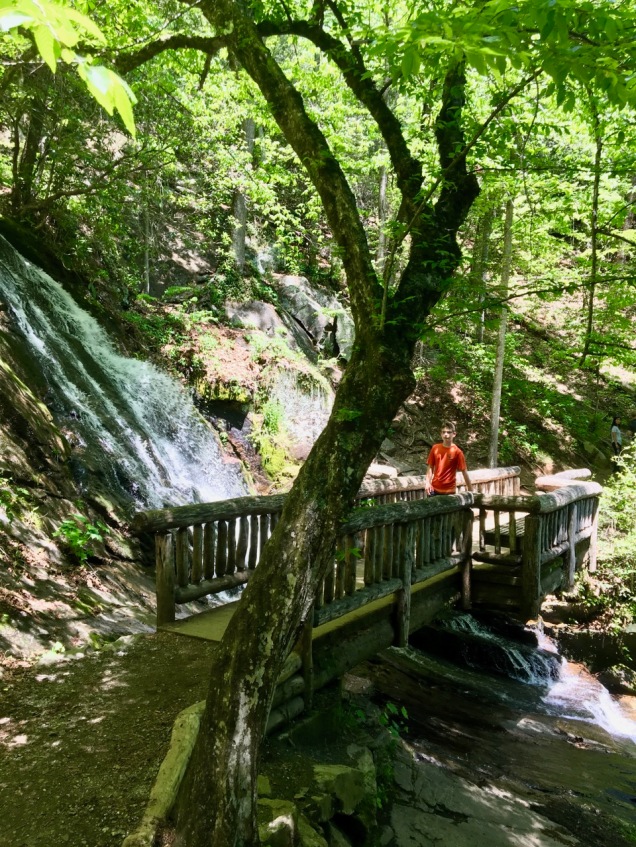 Our floating plans began to morph as the hours of remaining daylight shrank and the now-familiar logistical challenges of river floating with only one small car reared their heads again.  We just weren’t familiar enough with the area to choose a good put-in and take-out, and I didn’t trust myself to hitchhike again.  Renting tubes and floating the creek below the waterfalls we had hiked to was another option, with several takers from among the locals… it appeared to be quite the popular weekend activity.  But once again the logistics proved daunting, at very best.  No good way to get 5 innertubes from a rental site to a creek put-in with only a fully loaded Subaru and no pump.  What we could use is a pickup truck.  Ah well.  So we settled for dipping our heads in the cool water and watching the tubers enjoy themselves instead, followed by some playtime in the stream just across from our campsite upon our return. 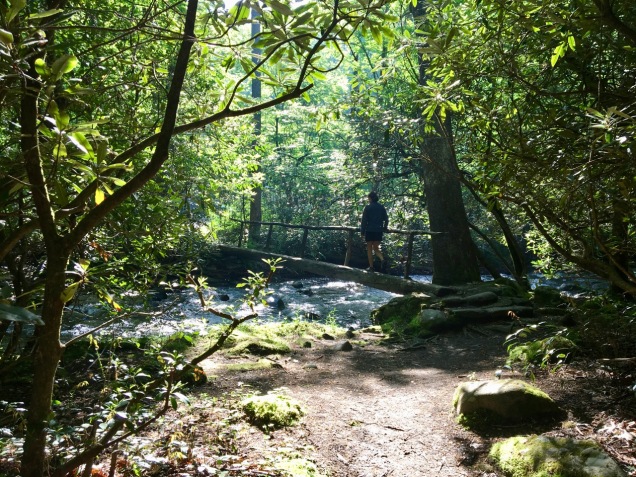 So yes, mixed feelings about Great Smoky Mountains NP, likely colored by high expectations brought on by the discovery of its extreme popularity.  We had a thoroughly pleasant visit.  And I bet it would be stunning in the Fall.  But it wasn’t enough to bring us back, I don’t think.  The kids seemed to agree.  It struck me as an excellent, and quite easy, long-weekend getaway for the millions and millions of folks in the South and on the Eastern Seaboard, but not the kind of place you would necessarily travel across the country to visit.

Unless, of course, you were living in a motorhome, in which case game on.

One thought on “Number One?”