Our relatively short drive from Estes Park to Vail will require another map due to its remarkable nature.  Here it is:

It looks like a little jaunt through the mountains, and I guess on some level it is, but we transited Rocky Mountain National Park via the Trail Ridge Road, and in doing so crossed the Continental Divide at 10,758’, traversed several miles of no-kidding tundra, and reached our (and Davista’s) highest elevation of the year, and likely ever, at 12,183’.  Thereafter we got to see the headwaters of the Colorado River as we descended toward some of the “lower” Colorado towns at 7,000’ – 8,000’.

“Why would you do this, driving a fully loaded motorhome and towing a car?” you might ask.  Fair question that I don’t have a good answer for, but I’m thrilled we did, as it was unforgettable.  I would not have attempted it last year.

Now I did do a good bit of research.  We had originally planned to take a different route that brought us over Independence Pass near Aspen.  What I discovered is that even though it’s slightly lower in elevation, it’s much more difficult for rigs like ours, and in fact we would have needed to disconnect the Toad in order to do it.  No thanks.  This route was much more big-rig friendly, and in fact I didn’t find it terribly challenging, all things considered.  The north section of Highway 1 and the road into and out of Death Valley were far trickier.

At any rate, it was a breathtaking drive.  Here are a couple pics of us up at the top. 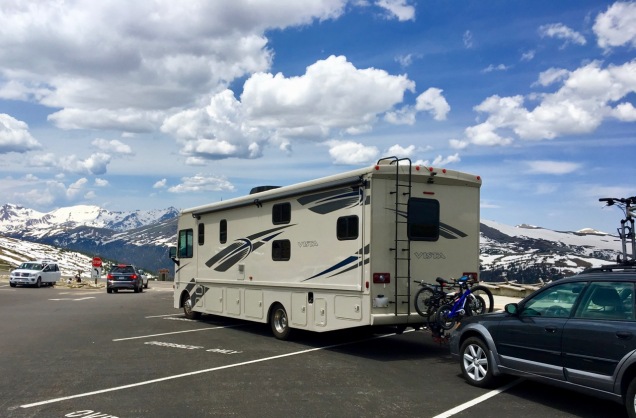 Having grown up recreating heavily on the Colorado River (Lakes Havasu, Mohave, Mead, and Powell, not to mention the various national parks surrounding it), it was fascinating for me to see the snowfields and meadows from which the trickle originates that eventually gains volume and velocity and then carves out the Grand Canyon.  As usual I attempted with varying degrees of failure to pass this fascination onto the kids.  Someday, maybe.

Something else that struck me on this drive was a sort of effortless coolness on Colorado’s part.  Not so much attitude-wise, more that just about anywhere you go in the western two-thirds of the state would be considered the absolute pinnacle of most places.  Mountain town after mountain town, waterfall after waterfall, most of which the majority of us have never even heard of.  Even the interstates seemed to have multiple areas where people just pulled off to the side of road with kayaks, bikes, climbing gear, etc to go play.  The whole thing was inspiring, and confirmed a lot of what I had noticed over the years about people I know who had grown up in this environment.

Up until departing Estes Park, we had deliberated between staying the next few days in Vail or Breckenridge.  Interestingly, it was Breckenridge that offered the full hookup / all the amenities plus heated driveways RV park, whereas the potential spot in Vail was a semi-primitive campground.  Ultimately we opted to save the money and go with Vail, but I would have loved to see both.

Quick digression… a couple months ago I heard of an impossibly good deal on ski passes offered to military members, dependents, and retirees.   So good that I figured I had either mis-read it or there was a catch.  Essentially it’s for the Epic Pass, which gets you unlimited skiing / riding at all Vail-owned resorts, of which there are now nineteen, with more purchases in the works I believe.  Among them: Vail and Beaver Creek (of course), Breckenridge, Telluride, Park City, Whistler (Whistler!), Northstar, Kirkwood, Heavenly, and now Stevens Pass in Washington.  That’s quite a line-up.  The price?  $99.  Yes, $99 for unlimited passes at all of these resorts.  That’s less than a day’s lift ticket at most of these places.  Figuring that we really couldn’t afford NOT to take advantage of this deal, I bought them for the family.  So I’m hoping we’ll get to see both Vail and Breckenridge at some point regardless of missing Breck this time…

We crested Vail pass on I-70 (10,662’ — !) in the mid-afternoon.  I had previously reported that there are no grades greater than 6% on interstate highways.  This turns out not to be true, as stretches on the west side of Vail Pass hit 7%.  Not quite a brake-burner, but it was definitely sporty.

Our campsite was another stunner — spacious and lush, and backing onto steep and gushing Gore Creek deep in the woods.

On occasion circumstances conspire to give me a shock back into the reality of our good fortune; this time it happened during a phone call with our realtor.  There I sat in my camp chair, complaining about how our neighborhood’s comps were unfairly bringing our home value down, or agonizing over how to get a potential buyer to our price, or something equally pointless in the Grand Scheme, when I casually tossed off “Hang on a sec… I need to move… this stream is rushing so loudly I can’t hear you…”  With a slight air of annoyance no less.  Our realtor, probably sweltering somewhere in DC traffic and on her way to an appointment with another needy client, paused for a few moments, and then a few moments more, and came back with “you’ve got to be kidding.  Where are you again?  WAIT, no… I don’t even want to know.”  We both laughed.  Though I do manage to do it anyway, it’s hard to justify getting worked up about home sale woes when you’re spending your Monday afternoon with your family next to a roaring creek in Vail.

Once again I wish we had more time there, but made the most of what we had with a few hikes up and down the creek. 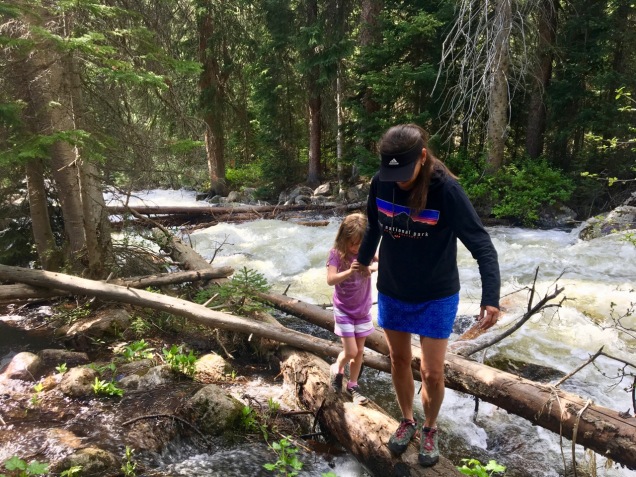 This (below) is the type of thing I probably shouldn’t encourage in Keeper given the risk vs reward profile, but sometimes I can’t help but cheer him on when he throws it on the line a bit in the name of adventure. 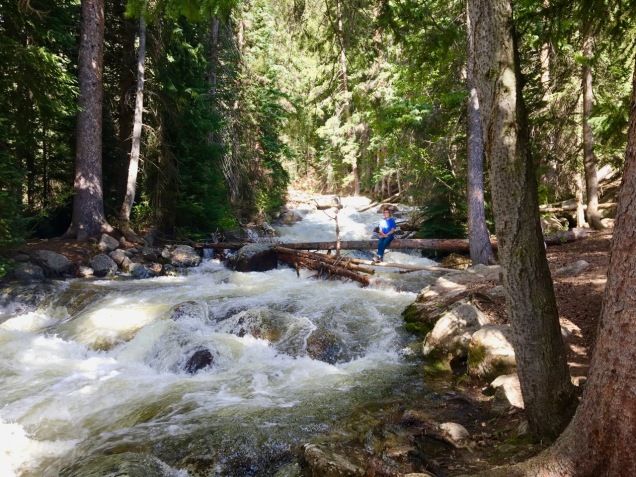 Vail is an interesting ski town – in many ways it’s unlike any I’ve seen before.  Though it’s known for its wide open back bowls and its European style village at the base, its topography makes it feel almost cramped to me.  The valley in which it sits is narrow and steep, fitting I-70 and about 3-4 blocks worth of streets on either side before climbing abruptly toward the high peaks on both sides of the interstate.  “Cramped” now strikes me as a bad description… it’s more that, despite its upscale reputation, it feels wild and remote, far more so than it actually is.

We definitely wanted to explore the village a bit on foot, as well as grabbing dinner there, but a steady rainfall kicked in midway through the afternoon and showed no signs of abating when dinnertime neared.  Undaunted, we drove the few miles into town, and discovered a few things.  Firstly, Vail isn’t a “car” town.  There are two large parking structures skirting the village center and those are where you park.  Period.  You can be lulled, like we were, into thinking that you’ll just drive around the village until you find some little nook where you can park unobtrusively – it’s summer in a ski town after all – but you won’t find anything, you’ll just kill time and then head back to the parking garage.  Secondly, Vail is really, REALLY expensive.  After forgetting that we had two bikes riding atop the Toad, bumping the hanging boom that demonstrates the height of the garage’s lowest clearances, removing the bike seats in the hope that we would now clear the boom (which we did by an inch or two), and driving gingerly in, we discovered the eye-popping price of leaving our car here while we walked around.  Noted.  Next time no cars.  Shortly thereafter, and moderately soaked by our walk to what we determined to be the restaurant that would offer the best balance between food we would like and prices we could handle, we discovered that you pretty much just cannot eat out in Vail reasonably.  The food where we ended up was good, sure, but we were hoping for sort of a “moderate” price tag and that particular beast just doesn’t seem to exist there.

It’s a great place though, and I can’t wait to get the family back there during ski season to flex those Epic Passes.

The drive out of Colorado was equally spectacular, as we passed fourteener after fourteener and still more effortlessly cool towns.  Taking advantage of our routing, we did a short detour to Great Sand Dunes National Park on the “back” side of the Front Range.  It’s exactly what it sounds like and has an interesting geological story, but unfortunately we didn’t leave ourselves enough time to scramble on the dunes themselves.

The kiddos didn’t seem to take to Colorado as much as Tacco and I did.  I’m leaving it with a great appreciation for all it has to offer and the slightest of filed-away-for-now intentions to dig deeper into its feasibility and desirability as a future home.

Next up is New Mexico, the northern part this time.  More friends, another work trip for me, and possibly some river kayaking on the Rio Grande!