“Anima” is a cool word.  Depending on the context and the language, it means “soul” or “spirit” or “psyche.”  Jung had a sub-theory of the subconscious involving the anima and the animus.  A friend of mine had it tattooed to her ankle back in the day when pretty much only bikers got tattoos, which is also pretty cool, I think.

That makes Animas a pretty great name for a river in my world.  And as it turns out, the Animas runs through Durango, which is one of the coolest towns in one of our coolest states.  That’s a whole lot of cool.

You know what isn’t cool though?  Fire.  And when we got there, Durango, or at least the northern portion thereof (and quite a bit of forest beyond it), was literally on fire.  This became a major factor in route planning, as we had a good bit of flexibility – basically we were looking at taking a week to get from Albuquerque to Moab, which isn’t very far, but spans a lot of spectacular terrain.  Many options, with some difficult choices we had to make.  We already knew we wanted to spend some time in Durango, but thereafter we had wanted to take the Million Dollar Highway, which is another name for Colorado Route 550 between Silverton (just north of Durango) and Ouray, a tiny and preposterously pretty ex-mining town surrounded by jagged peaks.  Upon our arrival we discovered that the Million Dollar Highway was at least partially engulfed in flames, and of course closed.  Well, shoot.

There was a up side, though, in that the closure facilitated a visit to Mesa Verde National Park (next post), which dovetailed nicely in theme with Tacco & the kids’ visit a few days ago to Bandelier National Monument and our visit along the way to Durango to Aztec Ruins NM.  Aztec is a fairly small site, but interesting, and as a bonus we got to see a bunch of bats hanging from the ceiling of one of the dwellings. 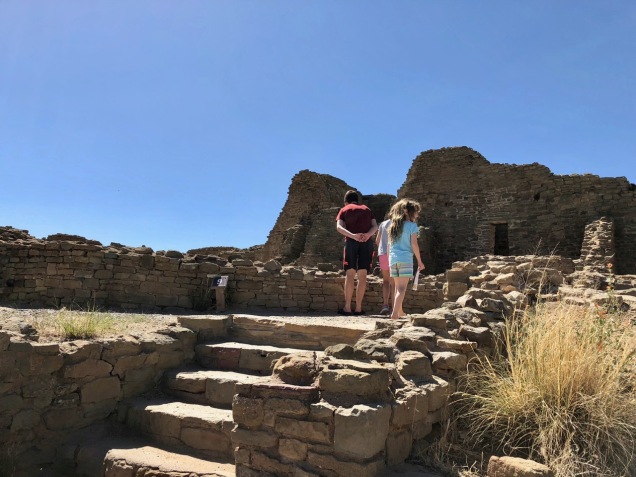 I think fire and the attendant blanket of smoke are probably the only things that could make Durango less appealing as a place to be (or live – if it were more easy to fly out of, it would almost certainly have made our short list of potential places to settle).  It sits right on the border of high desert and mountain biomes, with amazing weather, the Animas flowing through town, mountain biking galore, and Colorado Rockies skiing nearby.  In some ways it reminds me of Bend, but smaller and with more extreme terrain.  It’s an extraordinary place.

But that smoke…  We arrived in the early afternoon to find it hazy, but not too bad smoke-wise, despite the edges of the fire being just a few miles to the north.  Unfortunately we were informed by the campground personnel that the prevailing winds made it such that while afternoons weren’t bad, each morning brought very heavy smoke into town, so much so that even going outside wasn’t recommended.  They were correct, as we discovered the next day.  It was bad.  Bad enough that we didn’t particularly want to leave the confines of the motorhome and bad enough that the routine but sorely needed maintenance we had painstakingly scheduled for Davista had to be cancelled due to the mechanics not being willing to open their garage door to let the smoke in.

Here’s how it looked in the morning. 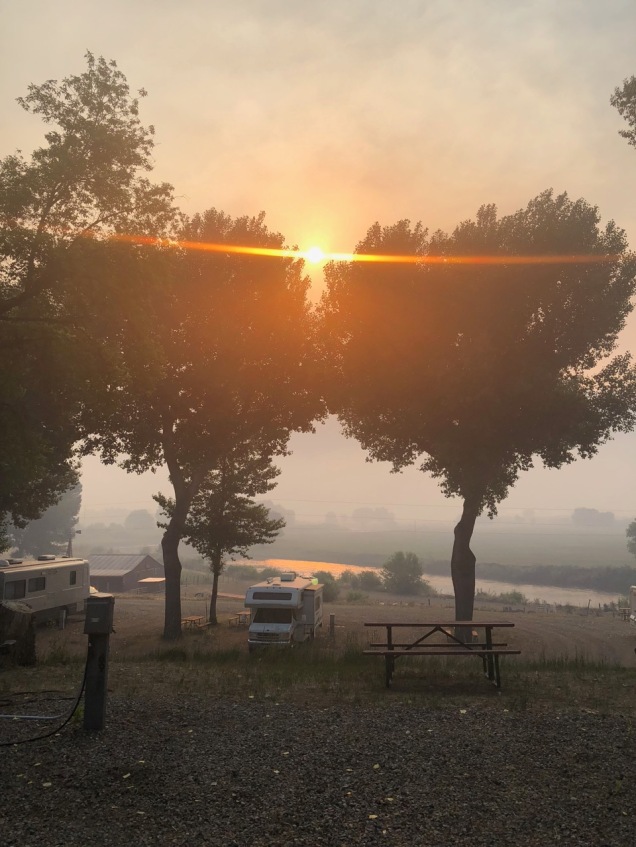 Luckily the prevailing wind pattern, um… prevailed, and that provided for clearing in the afternoons as the wind direction shifted to the south, blowing the smoke out of town each day.  I’m not sure why it took us this long trip-wise, but we finally pulled the soccer ball out of its storage compartment and ran down to the campground’s large, grassy field to play a makeshift game of two-on-two.  The kids loved it and wanted to continue until after dark.  Anything that gets them out of their stare-at-a-screen pattern I’m all for, but once it got too dark to see, the running around in a field with potential ankle-twisting divots caused me to bow out.  Checking out the glow of the fire and watching the various flame jumper aircraft flying in to drop their loads of fire-retardant was an equally entertaining alternative.

On our second to last day, we were able both to reschedule our sorely needed Davista maintenance and to raft the Animas.  Though I would have preferred to run it in our own kayaks, we’re not quite there yet, and opted to go with a guide.  Great call I think, as the girls still need some time to adapt to rapids, particularly given our upcoming rafting trip in Moab.  They both (Firebolt especially) have a tendency to chicken out of unfamiliar experiences if they perceive potential danger, and once the heels are dug in it’s pretty much game over, at least for that day.  So this was a good warmup.  Granted, they had already floated the Meramec, but this was definitely a few steps up from that, and the Colorado near Moab would likely be a couple more.  And of course there’s the end game of living on/near the Deschutes – it would thrill me to have a household full of river rats.

I didn’t manage to get any pictures unfortunately, but they loved it, including the decent set of rapids at the end.  Any river float is going to be a highlight for me; it was especially encouraging, though, to see the kids coming around to my point of view.

We do have one more stop in southwestern Colorado, for which I’m grateful, but overall I wish we had more time to spend here.  There’s so much to see and do, a good bit of which we’re missing – we had to bypass Telluride and the Black Canyon of the Gunnison – and what we did see was limited by the fires.  That’s a recurring theme during this journey of course — wishing we had more time.  But then I guess it always is.

One thought on “Animas”