Colorado’s neighbor to the south, though the two states share parts of the same mountain range, is a very different place.  In fact, after a few days in New Mexico my overarching impression was that it is the state least like any other in the country, including Alaska and Hawaii.  There really is a feeling there of being elsewhere – maybe not quite another country, but very close to it.

First of all there’s the elevation, at least in the northern part of the state.  While that’s not unique in itself, there’s not much around to give you the impression that you’re high up.  There are peaks scattered about, but also quite a bit of expansive, mostly arid flatland.  It was surprising to be making our way across a massive plain and to check my phone’s compass app (which has an altimeter) and discover that we were at 8000’.  And then there’s the architecture, which seems to center on pueblos and adobe, and is just about everywhere.  The signage is notably different as well, with everything written in both Spanish and English.  I could go on – the food (“which do you want, red chili, green chili, or Christmas?”), the look of the towns, the place names – but really it boiled down to a vibe that I didn’t entirely catch onto until we had been there for a week or so.

One of Tacco’s dearest friends, with whom she’s been very close since childhood, lives in Corrales, which hugs the Rio Grande just north of Albuquerque, so this was a visit we had all looked forward to for quite some time.

We parked Davista at a City RV park in Bernalillo, a bit further north, and I have to say, I wasn’t overly thrilled to be leaving the family there for my trip – it was good to know that they would be spending most of their time with friends, rather than at Davista.  Don’t get me wrong, it wasn’t full of fallen chemistry teachers cooking meth (and incidentally we somehow managed to go our entire time in Albuquerque without seeing any Breaking Bad points of interest, despite being fans), it was just a touch run down and didn’t seem to be attracting the segment of the public we were used to seeing while traveling.

Another thing – it’s getting hot.  Unsurprising given that it’s June and we’re in the desert southwest, but still.  Davista’s a/c can only work so hard, particularly when there’s no humidity in the air.  And we still have Lake Powell and Moab to go.

Fortunately Tacco’s friend lives in the bosque, which constitutes the majority of Corrales.  Don’t know what that is?  Neither did I.  Once again, here’s Wikipedia to the rescue:

“In the predominantly arid or semi-arid southwestern United States, a bosque is an oasis-like ribbon of green vegetation, often canopied, that only exists near rivers, streams, or other water courses. The most notable bosque is the 300-mile (480 km)-long ecosystem along the middle Rio Grande in New Mexico that extends from Santa Fe south to El Paso, Texas.”

Corrales is another unique place in that it’s retained a very rural character without being sprawling farmland.  Lots of dirt roads and animals everywhere (including on many of the properties), yet if you were to drive down the main drag it looks like a quaint suburb, or at least the New Mexican version of one.  Her sister + family live nearby and have some horses, and she has chickens, alpacas, and goats (possibly more?) at a friend’s property.  This was thrilling for the kids, and a definite highlight.  Just about anyone will be melted by holding a baby goat, even a video-game enthusiast pre-teen. 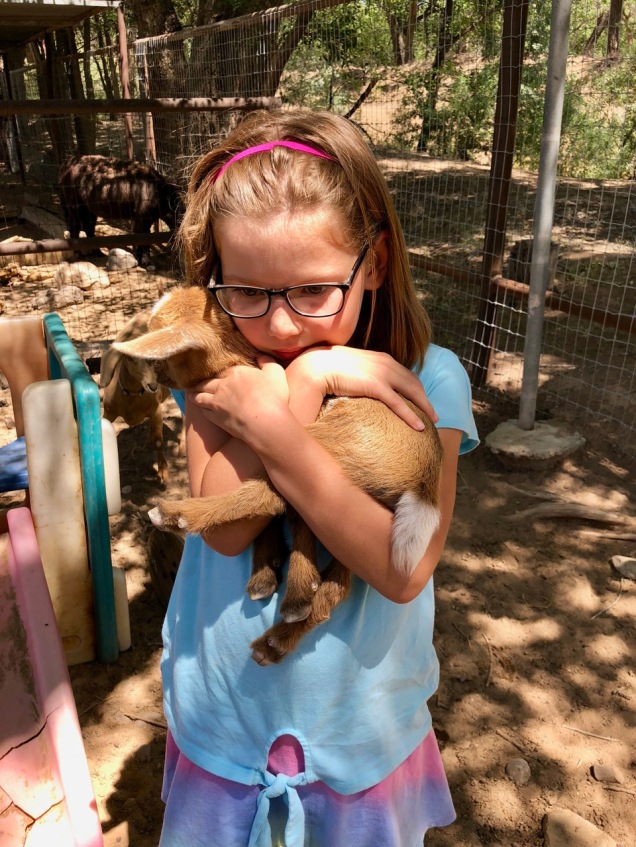 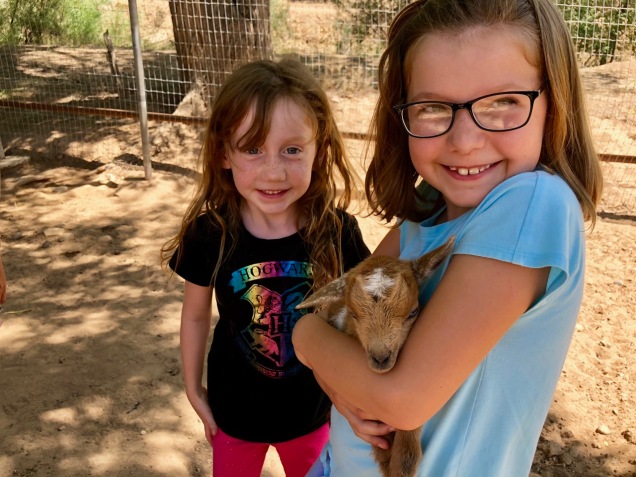 This one is Tulip, I believe. 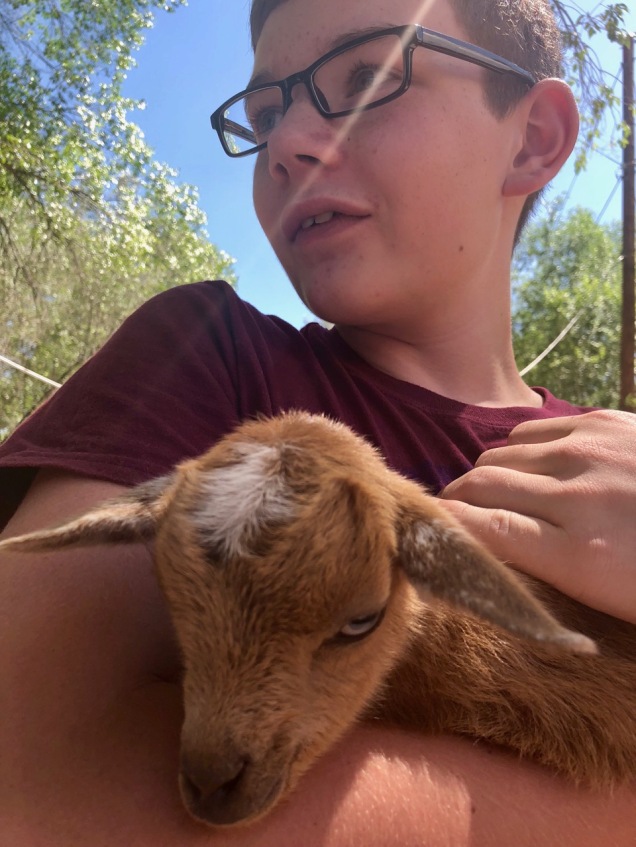 The girls got to collect the chickens’ fresh eggs and pet the alpacas. 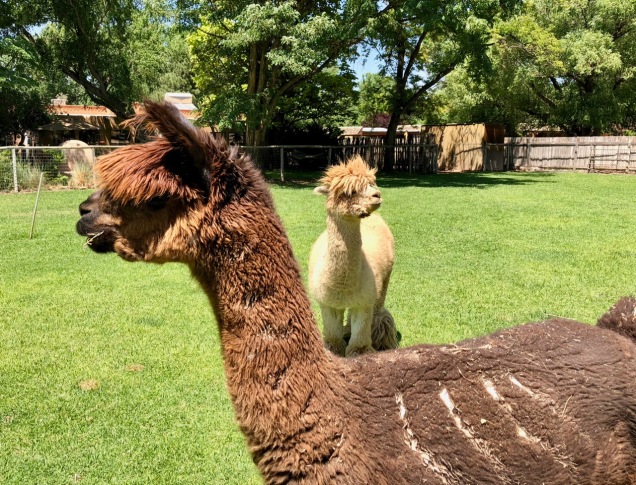 I left for my trip the day after we arrived there, but was treated to many, many pics of the kids playing with the animals sent via text.

Upon my return, I accepted Tacco’s friend’s gracious offer to give me a treatment for my sciatica.  She runs an eastern medicine clinic as a practitioner, and uses various modalities, including acupuncture.  It was actually somewhat of a joint treatment, as Tacco stayed in the room as well and assisted.  I won’t lie, I was a bit nervous about it, as I haven’t always had the best experiences with acupuncture.  I do enjoy letting Tacco treat me when I have something ailing me, but in general acupuncture can feel intrusive to me.  The best way I’ve found to describe it is that it, at times, feels like something is being touched that isn’t supposed to be touched.  And then a few times – not often, but enough to lodge in my memory – it has been downright painful.  Not poking-needle painful, but deeply, profoundly painful.   And this treatment, I was informed, would likely involve both “e-stim” (basically running electric current through some of the needles) and the “really long needles” in order to reach deeper portions of my glutes, which they thought might be inflaming my sciatic nerve.  None of that sounded amusing.  On the other hand, at this point I’ll try most anything, as spending each day in pain is taking a toll on me.  The needles couldn’t possibly hurt worse than the sciatica.

As it turned out, it was a very productive treatment, at least I think it was.  And she pulled out all the stops – the big needles, the cups (I won’t go far into this, but it’s essentially a massage in reverse in that heat is used to create suction in the cups, which are applied to the body and used to pull fascia / tissue up and away, rather than being pushed down as in a massage), the electricity, everything.  It was uncomfortable, and I’m glad I didn’t see the actual needles, as I was told they were several inches deep into my buttocks.  The sensation wasn’t so much of a needle being inserted, but I definitely felt it when she reached the level of tissue/muscle she was after.  Yow.  And then the e-stim made the muscles there twitch uncontrollably.  It’s exactly what she was going for, so I’m hopeful for an improvement.  But right now it’s all pretty sore down there, likely due to some muscles being aggressively woken up and/or loosened up after being in a state they shouldn’t have been in for a long time.

On our evening we were invited to a BBQ / hangout at her sister’s house, which is gorgeous and has a pool.  It was a perfect opportunity to lounge around and enjoy the company.

Alas no river kayaking after all due to a long-running drought in the area – the Rio Grande is just a trickle.  But that’s OK, as we have some serious rafting planned for our Moab visit.  I’ll tackle river kayaking when we get to Bend.