Veterans Day always resurrects an interesting mix of emotions in me, which is pretty much par for my staying (sort of) the Navy course.  Upon watching me struggle with getting off of active duty for maybe the third time, Flight observed to me, “You really have this weird love/hate relationship with the Navy,” with the implication that I probably should devote some time to getting to the bottom of whatever that is and put it to rest.  I have since gone through that emotional turmoil again to earn my fourth DD-214 (proof of active duty service) and haven’t yet made the opportunity to deconstruct that relationship, but until further exploring in a future post….

On the tip of the iceberg, I am very thankful to have served my nation (and still do wear the cloth of the nation, but only part time as a Reservist), yet I know that my Navy career has not been riddled with the challenges of many of my fellow active duty service members.  Although I am honored when people thank me for my service, I’m also a little embarrassed because I know their thanks come with an assumption of the many sacrifices that come with serving, and, as I have had such a great ride and (mostly) on my own terms, I haven’t really experienced many of those assumed challenges, which means it feels vaguely disingenuous to graciously accept such words of appreciation.  So wow, if that’s just the tip of the iceberg, Flight’s dead on (as per norm) and I’ve got some processing to do.  Sigh…

I guess it was fitting that on Veteran’s Day we were in the Valley of Fire State Park.  All the yin and yang of earth and fire gently sculpted into outcroppings as if to showcase their beautiful juxtaposition: 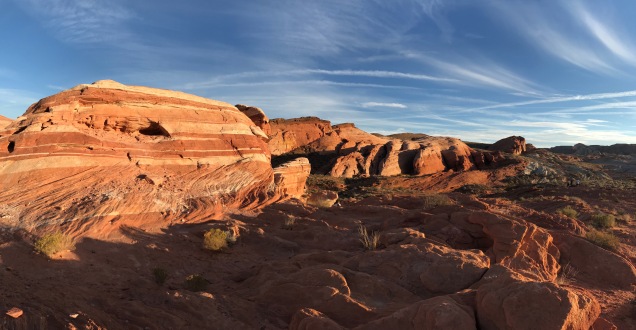 I have come to see my last active duty tour teaching at the Naval Academy as the epitome of a balanced, yet nearly bipolar, yin-yang existence.  You can’t get much more yang than teaching tomorrow’s warfighters the engineering behind modern weapons, all while serving them as a healer and so manifesting yin. What an incredible chapter that was, but back to the journey at hand…

As repellant as Joshua Tree appeared to find me, the red rocks within the Valley of Fire instead called to me as though I was coming home.  I was graciously invited to stretch my limbs and explore the valley’s chromatically striated nooks and crannies and, maaaaaaan, was I very happy to be welcomed among my rocks.

Because our timeline was anchored by when we could collect Flight at the airport, we made it to the Valley of Fire Visitor’s Center mid-afternoon, which turned out to provide the landscape perfect lighting for our exploration.  We spent about half an hour in the modest Visitor’s Center to learn a little of the transformation of the native nomadic peoples who settled into the first agrarian societies, thus curbing their wandering for at least for part of the year.  As their dependence on crop-tending grew, the Anasazi, as they have come to be known, relocated from low-lying caves to shelters offered by the higher rock outcroppings.  Aside from the crops they grew, the native population relied on the big horn sheep, and we were fortunate to see some of their offspring, a few generations removed:

Our trek started by skirting some varsity-sized rocks.

The hike was pretty easy going and maybe half a mile from the trailhead brought us to these glorious sights: 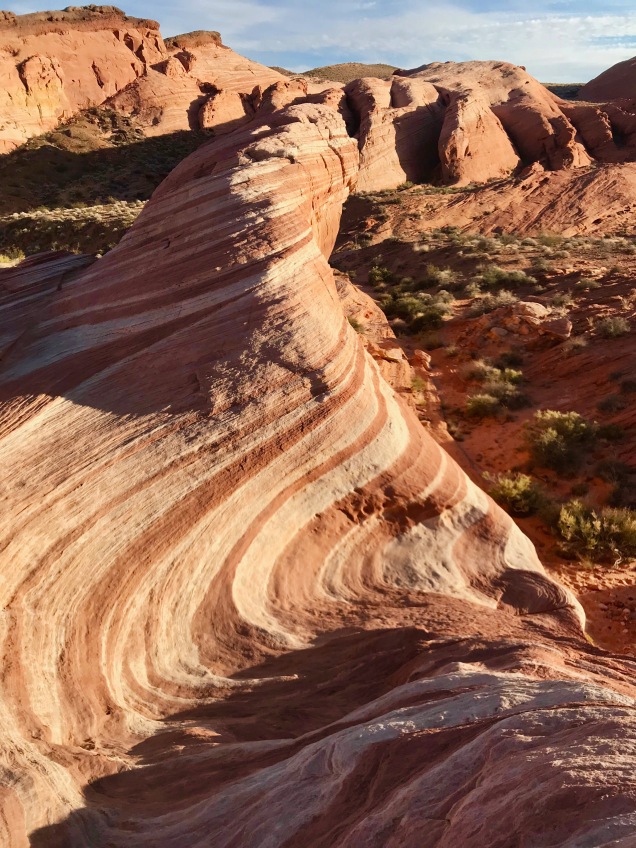 Although I was happy with how the rocks framed themselves in the above images (kind of them to line up so, no?), my favorite picture from that day was the one Flight took of WoodSprite skipping atop the formations looking not unlike Kokopelli dancing.

Regardless of where we find ourselves that child has the gift of a chameleon and subtly shifts to embody the energy of the local environment.

We made our way back to the Subaru and the monkeys posed for a picture with a sizable specimen of their favorite cactus.

As the afternoon waned into nightfall, we were favored with a beautiful sunset before we returned from the Valley of Fire to the energetic chaos that is Las Vegas.

After an afternoon spent among my rocks, my soul was in a much better space to resist the city’s relentless onslaught, although, frankly, no better prepared to dig into the 27+ years of my relationship with the Navy.  Fortunately (and I am observing my reluctance to do so as I type this) that process will have to go to the back burner as we’re going for full immersion tomorrow in Las Vegas’ tireless throng, which means I’ll need all my strength to withstand the energetically tumultuous Strip.